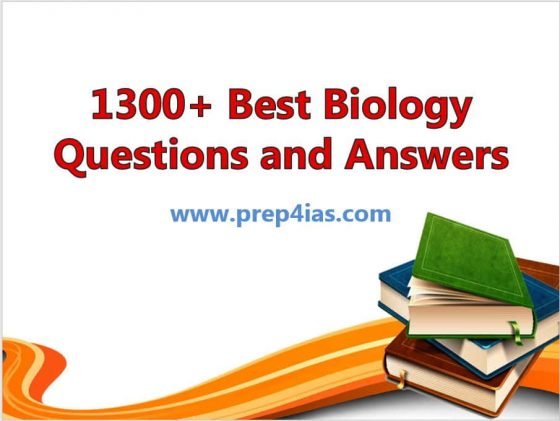 In this tutorial, we will go through 1300+ Best Biology Questions and Answers for all competitive exams. If you are an aspirant of UPSC, SSC and other competitive exams then you can always expect few questions from Biology section. I will cover some of the important questions that can help you in answering both objective as well as subjective questions. The source of all the below questions is from NCERT Book.

Best Biology Questions and Answers for All Competitive Exams

Ans. Cell is known as the basic building blocks for all living things.

2. What is the Scientific Name of Mango ?

Ans. Herbarium is a store house of collected plant specimens that are dried, pressed and preserved on sheets.

4. Who Proposed Five Kingdom Classification in 1969 ?

5. How Archaebacteria is different from other bacteria ?

Ans. Archaebacteria differ from other bacteria in having a different cell wall structure and this feature is responsible for their survival in extreme conditions.

6. Which Bacteria is also known as Blue-Green Algae ?

Ans. Heterotrophic Fungi or any other organisms which absorbs soluble organic matter from dead substrates are called Saprophytes.

8. What are the different means by which reproduction in fungi takes place ?

Ans. There are three different methods by which reproduction takes place:-

Ans. The Deuteromycetes reproduce only by asexual spores known as conidia.

12. Give some examples of Insectivorous Plants ?

Ans. A tissue is defined as group of cells along with intercellular substances performing one or more functions in the body.

14. Which tissue act as a reservoir of stored energy ?

15. What are the basic units of Nervous tissue ?

16. Which of the body segment together forms clitellum in Pheretima posthuma (earthworm) ?

17. Which Intersegmental Septum has pair of ovaries present in Earthworm ?

18. Which Intersegmental Septum has pair of testes present in Earthworm ?

20. What are Apical Meristems ?

Ans. The meristems which occur at the tips of roots and shoots and produce primary tissues are called apical meristems.

21. What is Intercalary Meristem ?

Ans. The meristem which occurs between mature tissues is known as intercalary meristem.

Ans. Permanent tissues having all cells similar in structure and function are called simple tissues.

23. What are Complex Tissues ?

Ans. Permanent tissues having many different types of cells are called complex tissues.

24. How many different types of Simple Tissues are there in Plants ?

Ans. There are three types of simple tissues in plants:-

25. Which of the simple tissues in plant often contains chloroplasts ?

26. Which of the simple tissue in plant are dead tissues ?

27. What is the main function of Sclerenchyma tissue ?

28. How many types of Complex tissues are there in plants ?

Ans. There are two types of Complex tissues in plants:-

29. How many different kinds of elements Xylem composed of ?

Ans. There are four kind of elements :-

30. What are different types of Primary Xylem ?

31. What is the main function of Phloem ?

Ans. Phloem transports food materials, usually from leaves to other parts of the plant.

32. How Sieve tube elements and Companion cells are connected in flowering plants ?

Ans. The sieve tube elements and companion cells are connected by pit fields present between their common longitudinal walls.

Ans. They store food materials in the form of starch or fat, and other substances like tannins.

36. Which Part of Companion cells controls the function of Sieve tubes ?

Ans. It is first formed primary phloem which consists of narrow sieve tubes.

Ans. It is later formed phloem which consists of bigger sieve tubes.

39. What are different types of tissue systems in plants based on structure and location ?

Ans. There are three different types of tissue systems in plants based on structure and location:-

40. Which is the outermost layer of the primary plant body ?

41. What is the main function of cuticle in Epidermis ?

Ans. The main function of cuticle is to prevent the loss of water.

42. What is the main function of Stomata ?

Ans. Stomata regulate the process of transpiration and gaseous exchange.

43. What is the main function of Guard Cells ?

Ans. The guard cell regulates the opening and closing of Stomata.

Ans. The parenchymatous cells which lie between the xylem and the phloem are called Conjuctive tissue.

45. What is Primary growth in Plants ?

Ans. The growth of the roots and stems in length with the help of apical meristem is called the primary growth.

46. What is Secondary growth in Plants ?

Ans. Most of the dicotyledonous plants exhibit an increase in girth apart from its primary growth. This increase is called the secondary growth.

47. Which of the tissues are responsible for secondary growth in Plants ?

Ans. There are two lateral meristems tissues responsible for secondary growth in plants:-

48. What is Vascular cambium ?

Ans. The meristematic layer that is responsible for cutting off vascular tissues – xylem and pholem is called vascular cambium.

49. What is the main difference between Spring wood and Autumn wood ?

Ans. The spring wood is lighter in colour and has a lower density whereas the autumn wood is darker and has a higher density.

50. Which tissue forms the main bulk of the Plant ?

Ans. The ground tissue system forms the main bulk of the plant.

51. What are adventitious roots ?

Ans. In some plants, like grass, Monstera and the banyan tree, roots arise from parts of the plant other than the radicle and are called adventitious roots.

52. What are the main functions of root system in plants ?

Ans. The main functions of the root system in plants are:-

Ans. The arrangement of veins and the veinlets in the lamina of leaf is termed as venation.

54. When the venation is termed as reticulate ?

Ans. When the veinlets form a network, the venation is termed as reticulate.

55. When the venation is termed as parallel ?

Ans. When the veins run parallel to each other within a lamina, the venation is termed as parallel.

56. When the leaf is called compound ?

Ans. When the incisions of the lamina reach up to the midrib breaking it into a number of leaflets, the leaf is called compound.

57. What are different types of Compound Leaves ?

Ans. There are two different types of compound leaves:-

Ans. It is the pattern of arrangement of leaves on the stem or branch.

59. What are the three different types of Phyllotaxy ?

Ans. The three different types of phyllotaxy are :-

60. Which of the features of Stems differentiate it from the roots ?

Ans. The morphological features of stems like the presence of nodes and internodes, multicellular hair and positively phototropic nature help to differentiate the stems from roots.

61. What are Diploblastic Animals ?

Ans. Animals in which the cells are arranged in two embryonic layers, an external ectoderm and
an internal endoderm, are called diploblastic animals.

Ans. The body cavity, which is lined by mesoderm is called coelom.

Ans. Volume of air inspired or expired during a normal respiration is known as Tidal Volume.

65. What is Inspiratory Reserve Volume(IRV) ?

Ans. The additional volume of air, a person can inspire by a forcible inspiration is known as Inspiratory Reserve Volume.

66. What is Expiratory Reserve Volume(ERV) ?

Ans. The additional volume of air, a person can expire by a forcible expiration is known as Expiratory Reserve Volume.

Ans. The volume of air remaining in the lungs even after a forcible expiration is known as Residual Volume.

Ans. The total volume of air a person can inspire after a normal expiration is known as Inspiratory Capacity. This includes tidal volume and inspiratory reserve volume ( TV+IRV).

Ans. The total volume of air a person can expire after a normal inspiration is known as Expiratory Capacity. This includes tidal volume and expiratory reserve volume (TV+ERV).

70. What is Functional Residual Capacity(FRC) ?

Ans. The volume of air that will remain in the lungs after a normal expiration is known as Functional Residual Capacity. This includes ERV+RV.

Ans. The total volume of air accommodated in the lungs at the end of a forced inspiration is the Total Lung Capacity.

73. Which part of the Brain is primary responsible for maintaining the respiratory rhythm in the body ?

74. Which part of the brain can alter the respiratory rhythm in the body ?

Ans. A pneumotaxic centre in the pons region of the brain and a chemosensitive area in the medulla can alter respiratory mechanism.

75. Which is the Primary site for exchange of gases in Respiratory System ?

76. Which of the Salivary Glands are responsible for producing Saliva ?

77. Which is the largest gland in an adult human ?

78. Which of the ducts open together in duodenum ?

Ans. The bile duct and the Pancreatic duct

79. Which Gland is both exocrine as well as endocrine in human body ?

80. What is the main function of Mucus in Saliva ?

Ans. Mucus in saliva helps in lubricating and adhering the masticated food particles into a bolus.

81. For how many hours Stomach stores the food ?

Ans. During digestion process, the food mixes thoroughly with the acidic gastric juice of the stomach by the churning movements of its muscular wall and is called the chyme.

84. Which of the Inactive enzymes are usually be present in Pancreatic Juice ?

85. Which of the gastric Juice components protects mucosal epithelium from excoriation by the highly concentrated hydrochloric acid ?

86. What are the main functions of Large Intestine ?

Ans. Below are the main functions of Large Intestine:-

87. What is Open Circulatory System ?

Ans. It is a kind of circulatory system in which blood pumped by the heart passes through large vessels into open spaces or body cavities called sinuses.

88. What is Close Circulatory System ?

Ans. It is a kind of circulatory system in which the blood pumped by the heart is always circulated through a closed network of blood vessels.

Ans. It is a symptom of acute chest pain appears when no enough oxygen is reaching the heart muscle.

90. Why Sino-atrial node is called the pacemaker ?

Ans. Sino-atrial node (SAN) generates the maximum number of action potentials per minute (70-75/min) and therefore, it sets the pace of the activities of the heart. Hence it is called the Pacemaker.

92. Which organ serves as common passage for both food and air ?

93. How many types of permanent teeth are there in human body ?

Ans. There are four different types:-

94. What is Respiration in Plants ?

Ans. The breaking of the C-C bonds of complex compounds through oxidation within the cells, leading to release of considerable amount of energy is called respiration.

95. How many types of cells movements does human body exhibit ?

96. How many pairs of ribs are there in human body ?

97. How many Cranial bones are there in Human Skull ?

98. Which of the bones collectively forms Ear Ossicles ?

Ans. It is an Auto immune disorder affecting neuromuscular junction leading to fatigue, weakening and paralysis of skeletal muscle.