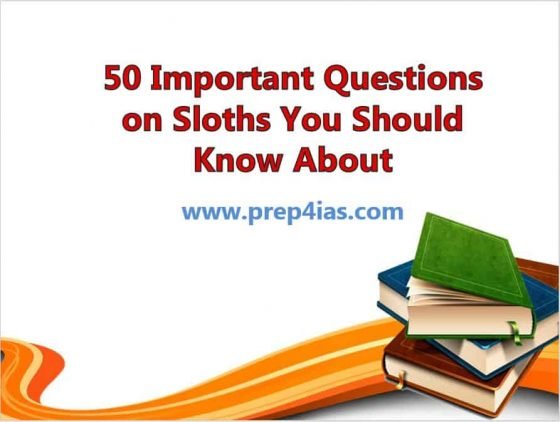 In this article, I will take you through 50 Important Questions on Sloths You Should Know About. Sloths are often misunderstood as some species of Monkeys. But both are very different to each other. Sloth being famous for their slow movement spend most of their lives hanging upside down in the trees of the tropical rainforests of South America and Central America. From the moment they are born sloths are able to lift their entire body weight upwards with just one arm. They are considered to be most closely related to anteaters, together making up the xenarthran order Pilosa. We will see some important questions on Sloths on below section.

50 Important Questions on Sloths You Should Know About

Also Read: 55 Incredible Facts on Kangaroo You Should Know About

Ans. Sloths have an extremely low metabolic rate, which means they move at a languid, sluggish pace through the trees. On average, sloths travel 41 yards per day – less than half the length of a football field. More on WWF official page.

Ans. When left alone, sloths are not dangerous by any means, but when threatened, they can inflict pain.

6. How many sloths are left in the world ?

Ans. As per IUCN data, there are little over 1600 sloths left in the World.

Ans. Two of the six species of sloths rate high on the list of endangered animals.

Ans. There is no real collective noun for a group of sloth’s as they are usually solitary animals.

Ans. No, they are mammals.

Ans. No, they are mammals.

Ans. Yes, they have tiny ears. It is so tiny that it can easily overlooked. They are known to be half deaf as their hearing capability is not so well developed.

14. How do sloths protect themselves ?

Ans. Sloths typically rely on their camouflage to protect themselves from predators. However, when threatened, they can use their 3- to 4-inch-long claws and teeth to defend themselves.

Ans. They spend much of their lives in the canopy, snoozing and remaining hidden from predators. The animals live solitary lives and travel from tree to tree using canopy vines.

Ans. Yes, they can hold their breathe up to 40 mins under water. It is because of their capability to slow their heart rates to one-third its normal rate.

Ans. Sloths have long, coarse fur that is light brown in color, but often appears green due to the blue-green algae that grow there.

19. How long can sloths hold their breath ?

Ans. They can hold their breathe for whopping 40 mins under water.

Ans. A sloth in captivity can sleep up to 15 hours a day but in wild it rarely sleeps for more than 10 hours.

Ans. Sloths might be the slowest but they are also one of the smartest animal.

Ans. Sloths are not much bigger in size and usually max out at about 2.5 feet.

Ans. Sloths claws can be as large as 3 to 4 inch long.

24. How do sloths survive in the amazon rainforest ?

Ans. Sloths have specialized tendons in their hands and feet that lock into place, allowing them to hang upside down for long periods of time without wasting any energy.

27. Do sloths have predators ?

Ans. Yes, Jaguars and eagles are common predators of sloths.

Ans. There are plenty of sloths in Costa Rica but it is difficult for an untrained eye to find. You need to take help from local tour guide.

Ans. Sloths are the slowest land animals. Their maximum speed is 0.27 km/h.

Ans. Yes, sloths sleeps mostly during the daytime and wakes up at night to eat.

Ans. No, sloths are not poisonous.

Ans. There are not much information available about sloth mating but like most mammals, sloths are ´promiscuous’. The male will mate with as many females as he can find, and the females will mate with all the males who are able to approach her. The mating time is brief, ends in just few minutes. More on Sloth Conservation Official page.

Ans. Sloths are mostly found in the trees of the tropical rainforests of South America and Central America.

Ans. Generally, two-toed sloths are known to be quite aggressive and can do some serious damage with their claws in comparison to three-toed sloths which are generally more easygoing.

Ans. Sloths are hypsodonts, meaning that like rabbits and horses, their teeth grow continuously throughout their lives. The two-fingered sloths have four razor-sharp pseudo-canines, two on top and two on the bottom.

Ans. Sloths are not dangerous to humans if left alone in their natural environment. If they feel threatened, they can lash out with their long claws.

Ans. They weigh anywhere between 9 and 17 pounds (about the size of a small dog).

Ans. Jaguars and eagles are common predators of sloths.

Ans. Sloths are native to Central and South American countries. They are found all over the countries.

Ans. Due to their low metabolic rate, they eat very little food to survive. It takes days for them to process what other animals can digest in a matter of hours.

41. Can sloths starve on a full Stomach ?

Ans. If they get too cold, the special microbes that live in their stomachs can die, and the sloth can no longer digest the leaves that it eats. In that situation, they can starve to death on a full stomach.

42. How long does it take a sloth to digest food ?

Ans. It takes sloths 30 days to digest a leaf. Sloths have the lowest metabolic rate of any mammal, which means that it takes them a long time to digest anything. They have an incredibly large and permanently full four-chambered stomach, which can account for up to 30% of their body mass.

43. Are there sloths in Australia ?

Ans. At this time there are no sloths in Australia.

45. How long have sloths been around ?

Ans. They’ve been on Earth for 64 million years.

46. How many species of sloths are there ?

Ans. There are six known species of sloths:-

49. How many types of sloths are there ?

Ans. There are two different types of sloths – two-toed and three-toed.

50. How often do sloths defecate ?

Ans. Sloths are famous for their unusual and bizarre bathroom habits. Both two-fingered (Choloepus) and three-fingered (Bradypus) sloths will only defecate once a week, and for some strange reason, they will only do it on the ground. For a sloth, this is a big deal.