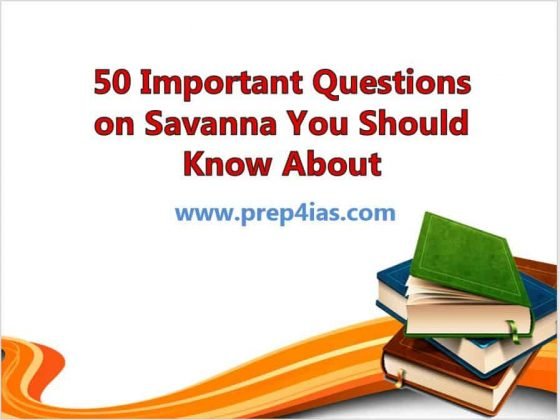 In this article, I will take you through 50 Important Questions on Savanna Grassland that you should definitely know about. Savanna landscape can be found all over the world except in Antarctica. It frequently lies in transition zone between forest and desert or grassland. One of the important characteristics of the region includes seasonal water availability, with the majority of rainfall confined to one season. Savanna is usually abundant in fauna due to its landscape characteristics. It covers approximately 20% of the Earth's land area. We will see some more important questions about this in below section.

50 Important Questions on Savanna You Should Know About

Also Read: 55 Incredible Facts on Kangaroo You Should Know About

Ans. A savanna or savannah is a mixed woodland-grassland (i.e. grassy woodland) ecosystem characterized by the trees being sufficiently widely spaced so that the canopy does not close.

2. How do giraffes adapt to the Savanna ?

Ans. The giraffe's patterned spots and light tan to dark brown coloring help blend the animal in the grassland environment. Although their large size and defensive kicking abilities protects them from most of the savanna predators, babies are at risk and require the extra protection their camouflage offers.

3. What is the average yearly precipitation in the Savanna ?

4. What is the average temperature in the African Savanna ?

Ans. The average temperature in African Savanna is about 78° F per year.

5. How much rain does the Savanna get each year in mm ?

6. How much water does the Savanna get in the wet season ?

7. How many African savanna elephants are left ?

Ans. Savanna elephants are endangered and as of now there are just 415,000 elephants left across Africa.

9. How many seasons does the savanna have ?

Ans. Savanna regions have two distinct seasons - a wet season and a dry season. There is very little rain in the dry season. In the wet season vegetation grows, including lush green grasses and wooded areas.

10. How much sunlight does the Savanna get ?

Ans. Savanna grassland soils are not very fertile. The nutrients in the soil are found near the surface as they come from decayed organic matter (vegetation) from the previous growing season. This organic matter decays rapidly due to the high temperatures.

12. Where do cheetahs live in the Savanna ?

Ans. Cheetahs are usually found in the eastern and southern Africa savanna, which is comprised mostly of vast grasslands and open woodlands with semi-desert conditions, such as in Namibia and Kenya.

13. How useful is rainfall in the Savanna vegetation ?

Ans. Rainfall plays a critical role in the growth of trees in the Savanna vegetation. Trees, with their tougher leaves and roots, are able to survive better in dry periods because of their ability to withstand water stress. Under wet conditions, grasses have an advantage because they can quickly absorb water and support high rates of photosynthesis, the process by which plants convert sunlight into energy.

14. What is the rainiest month in Savannah ?

Ans. The month with the most wet days in Savannah is August, with an average of 15.5 days with at least 0.04 inches of precipitation

15. What is the average humidity in Savannah Georgia ?

Ans. The average relative humidity in Savannah Georgia is around 71%.

16. How many square miles does the African Savanna cover ?

18. What animals Live In The African Savanna ?

19. How do Lions survive in the Savanna ?

Ans. The skin color of the lions allows them to blend in with the savannas, open woodlands and deserts in which they live. Long, retractable claws help lions snare their prey, while rough tongues make it easy for them to peel back the skin of that prey and expose its meat.

20. How many animals live in the African savanna ?

Ans. There are 45 species of mammals, almost 500 species of birds, and 55 species of acacia in the Serengeti Plains. There are animals such as lions, African wildcats, klipspringer, steenbok, Burchell's zebra, African Savanna monitor, and puff adders.

22. Who lives in the African Savanna ?

Ans. The best known people live in the African Savanna are the Masai. Apart from them, many other people lives in Savanna which includes the Nubians in the upper Sudanese Nubia, the Kualngo and the Akan in the Ivory Coast, the Bushmen and the Hottentots in Namibia.

23. Are jaguars found in the Savanna ?

Ans. They're typically found in tropical rainforests but also live in savannas and grasslands.

24. Do Flamingos live in Savanna ?

Ans. Yes, Lesser Flamingos do live in the savanna.

26. Do Kangaroos live in the Savanna ?

Ans. Yes Kangaroos are found in the savannas of Australia, Tasmania and surrounding islands.

27. Do tigers live in the African Savanna ?

28. Which animals in the African savanna are invertebrates ?

Ans. Some of the invertebrates that lives in Savanna are grasshoppers, termites, and beetles.

29. What animals live in Savannas ?

30. Where is the Savanna biome located ?

Ans. The largest areas of savanna are found in Africa, South America, Australia, India, the Myanmar (Burma)-Thailand region in Asia, and Madagascar.

31. What are the characteristics of animals that live in Savanna ?

Ans. Some of the widely seen characteristics of animals that live in Savanna are :-

32. What animal is best adapted to life in a Savanna biome ?

Ans. The animal best adapted to life in a Savanna biome is Zebra.

Ans. Savannas occur where there isn't enough rain to support a tropical rainforest, but there is enough to keep it from becoming a desert. There is usually a dry season and a rainy season in the savanna, with strong, hot winds in the dry season and enough rain in the wet season to flood low-lying areas.

35. How do wildfires help maintain Savannas and Grasslands ?

Ans. Regular wildfires remove dead and dying growth. They also maintain the balance between larger plants and grasses. Larger plants, such as trees and shrubs, recover from fires less quickly than grasses.

36. What do elephants eat in the Savanna ?

Ans. Savanna elephants are often found grazing on grasses, but they also browse on a wide variety of plants and fruits. This selection varies depending on the time of year; during the rainy season the elephant will feed more on grass than during the dry season. More on WWF official website.

37. How have Savanna plants adapted to long periods of drought ?

Ans. Below are few of the ways through which Savanna plants has adopted to long periods of drought:-

38. Why do animals migrate to the Savanna ?

Ans. Many animals of the savanna migrate throughout the year, searching for food and water. Many of the droughts are seasonal and hit one area before another, so animals are constantly following the rains.

39. How are animals adapted to the Savanna ?

Ans. Animals adapt to the shortage of water and food through various ways, including migrating (moving to another area) and hibernating until the season is over. Grazing animals, like gazelles and zebras, feed on grasses and often use camouflage to protect themselves from predators when they are roaming in the open.

Ans. The savanna is dominated mostly by grasses such as Rhodes grass, red oats grass, star grass, lemon grass, and some shrubs.

41. What predators live in the savanna ?

Ans. Lion, Cheetah and Leopard are the apex predator that lives in Savanna.

42. Why are some animals getting endangered in the Savanna ?

Ans. Overgrazing of the land, poaching and human use of precious resources has caused several savanna animals to become endangered.

43. Which climate type is associated with Savannas ?

Ans. Savanna is a transitional type of climate found between the equatorial rainforests and hot deserts.

44. How do elephants survive in the Savanna ?

Ans. The elephant's size makes them hard for predators to eat, such as leopards, lions, or jaguars. At night, the adults form a circle around the calves to protect them from danger. But in the day, an unlucky calf might wander away from the herd and be some predator's lunch. But adults have thick skin, making it hard to bite.

45. Why is the savanna so important ?

Ans. Savanna plays a major role in sustaining a lot of plant and animal species. They also play a critical role in regulating global warming as the grassland stores lot of Carbon. The rich biodiversity of savanna is not just important for us but for future generations to come.

Ans. Bees should spawn in the savanna biome. They play an important role in the ecosystem. They also have many unique interaction with the animals there. Such as scaring lions or being overpowered by honey badgers.

48. What is one important difference between Savannas and Temperate grasslands ?

Ans. Few of the important differences between Savannas and Temperate grasslands are:-

49. How is a Savanna different from a Plateau ?

Ans. A savanna is a tropical grassland dotted with small trees and shrubs while a plateau is an area of high and mostly flat land.

Ans. The savanna biome is often described as an area of grassland with dispersed trees or clusters of trees.