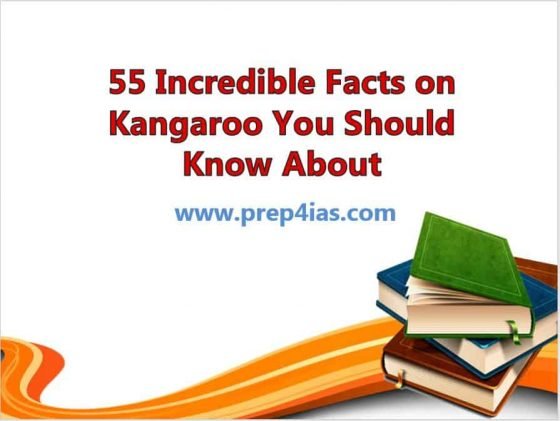 In this article, we will see 55 Incredible Facts on Kangaroo that you should definitely know about. Kangaroos are marsupial indigenous to Australia and New Guinea. It belongs to the family Macropodidae. The largest species of this family is Red Kangaroo as well as the Antilopine kangaroo, eastern grey kangaroo, and western grey kangaroo. The kangaroo is a symbol of Australia, appears on the Australian coat of arms and on some of its currency. The kangaroo is important to both Australian culture and the national image, and consequently there are numerous popular culture references. More on wikipedia. Here we will see some more incredible facts about this animal in below section.

55 Incredible Facts on Kangaroo You Should Know About

Also Read: 55 Important Questions on Octopus You Should Know About

Ans. Kangaroos are herbivorous animals which mainly feeds on leaves and grass in the wild.

Ans. At times, Kangaroo can become little aggressive towards the people. Their strong hind legs and long powerful claws are capable of causing irreparable damages.

4. Do male kangaroos have pouches ?

Ans. No, only female kangaroos have pouches.

5. How tall are kangaroos ?

Ans. A kangaroo can reach heights from anywhere between 3- 8 feet (1 to 3 meters).

6. What is a baby kangaroo called ?

Ans. A baby kangaroo is called a Joey.

7. Where do kangaroos live ?

Ans. Not all of the Kangaroos species are endangered. Only few of them like Matschie's tree kangaroos are an endangered species with an estimated wild population of less than 2,500 individuals.

Ans. Kangaroos are good swimmers. They swim to avoid predators, and can use their forepaws to drown pursuers.

Ans. A kangaroo can jump up to a height of 10 feet.

11. What is a group of kangaroos called ?

Ans. A group of kangaroos (usually ten or more roos) is known as a mob, troop, or court.

Ans. Kangaroos have the strongest and most muscular legs of any hopping animal. Above all, kangaroos are genetically predisposed to be muscular. Pure muscle accounts for 50% of their total weight. As a result, they are naturally buff animals.

Ans. Yes, the kangaroo is a marsupial from the family Macropodidae (macropods, meaning "large foot").

Ans. Kangaroo females get pregnant in the regular way. They shed an egg from their ovary and it drifts down the fallopian tube where, if it meets up with sperm, the egg is fertilized and then embeds itself in the wall of it's mother's uterus.

Ans. An average lifespan of a Kangaroo in wild is somewhere between 15-20 years but in captivity they can live little bit longer than 20 years.

16. How many kangaroos are there in Australia ?

Ans. A red kangaroo can reach speeds of over 35 miles an hour. Their bounding gait allows them to cover 25 feet in a single leap and to jump 6 feet high.

18. What are kangaroos afraid of ?

Ans. Kangaroos fear sound of its own feet.

20. Why do kangaroos stand in water ?

Ans. Kangaroos will go to water if they're threatened by a predator.

Ans. No, they don't because they are mammals. They are marsupials animal which gives birth to young ones.

23. How many vaginas does a kangaroo have ?

Ans. The name kangaroo is derived from the native aboriginal name gaNurru, which they used to identify the eastern grey kangaroo.

25. How many species of kangaroos are there in Australia ?

26. Do kangaroos jump on their tails ?

Ans. A kangaroo uses its tail for hopping, walking and even for balancing so that they can free their leg for kicking.

27. Do kangaroos wag their tails ?

Ans. Kangaroos are incredible strong animal. They have muscular hind legs that can exert a kick force of about 759 pounds.

30. What is the fastest kangaroo ?

Ans. A red kangaroo can reach speeds of over 35 miles an hour.

31. Are kangaroos faster than humans ?

Ans. Yes, Kangaroos are much much faster than human beings. The red kangaroo of the Australian plains is probably the most efficient ground animal in the world.

Ans. Nocturnal kangaroos have special night vision allowing them to see well at night. This is because the eyes have a distinct auditory nerve.

Ans. Kangaroos can well adjust in colder temperatures. They can adapt and acclimatize over the course of the cold weather and grow a good winter coat.

34. How long do kangaroos sleep per day ?

Ans. Kangaroos are nocturnal animals, which means they sleep during day time and they hunt during night time.

36. What is kangaroos scientific name ?

37. How massive a Kangaroo can grow ?

Ans. Kangaroos eat almost every part of all the trees like bark, leaves, trunk etc. as they are primarily herbivores animals.

Ans. This is a little known fact that not all the Kangaroos but just the Red one has a weak anabolic poison in the claws of its hind legs.

Ans. According to a new research, Kangaroos have 5 legs. A walking kangaroo propels itself with its tail, essentially transforming the appendage into a fifth "leg."

Ans. According to a new study, Kangaroos uses its five legs instead of four for walking. They uses their tail as an extra leg when walking.

Ans. This is because of their thick tail, which acts as a counter-balance to their front-facing movements.

44. How do kangaroos talk to each other ?

Ans. One of the most common ways kangaroos communicate is by stomping their hind legs noisily on the ground.

45. Why Male Kangaroos does not need pouches ?

Ans. Male kangaroos have no need for a pouch as they can't produce milk.

Ans. A Kangaroo sit using its hind legs and tail.

47. Are there Kangaroos in Africa ?

Ans. No, Kangaroos aren't native to Africa. They only exist in Australia, New Guinea, and a few nearby islands.

48. What sounds do Kangaroos make ?

Ans. The different species of Kangaroo are of different color. The fur of the Kangaroos can be of red to brown color. Some of the species might have dark grey to black color all over the body except bellies which are nearly white.

50. What is a female kangaroo called ?

Ans. A female kangaroo is called a flyer.

Ans. A male kangaroo is called a boomer.

52. How long does a kangaroo stay in the pouch ?

Ans. Red kangaroos leave the pouch for good at around eight months and continue to suckle for another three to four months; grey kangaroos leave at about 11 months, continuing to suckle until they are as old as 18 months.

53. Does a kangaroo have a dorsal nerve cord ?

54. Why are kangaroos only in Australia ?

Ans. At the time all continents were part of the supercontinent known as Gondwanaland. However, 180 million years ago, the continents split away occupying their present locations. Consequently, most of the kangaroos became natives of Australia.

55. What was the original home of the Kangaroos ?

Ans. Before the split of the supercontinent Gondwanaland, the original home of the kangaroos was South America.