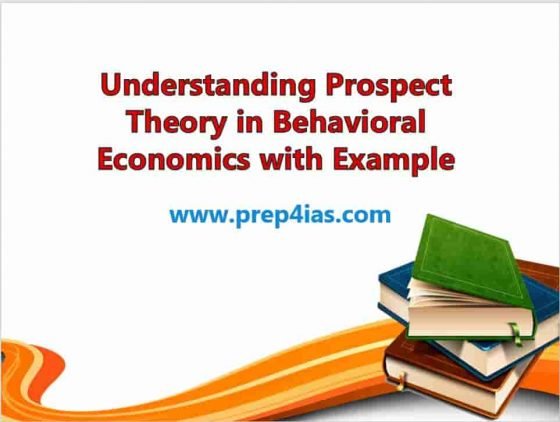 The prospect theory is a behavioral theory that aims to explain the psychology of decision-makers. The theory proposes that people interpret and value gains and losses very differently and they are more likely to choose expected gains over perceived losses. The prospect theory has been used in different concepts and fields of finance and economics. In this article, we shall study the importance of this theory. Some economists have also criticized the findings of the theory and its lack of evidence, this shall also be discussed in this article.

The prospect theory was presented by very famous economists named Daniel Kahneman and Amos Tversky in the year 1979. This theory was cited in the work of Kahneman when he won the Nobel Memorial prize for his work in the field of economics in the year 2002. The theory holds vital importance in the fields of behavioral finance and behavioral economics.

The theory of prospect is based on the concepts of human psychology and human behaviour. The theory aims to explain how people choose between alternatives and compare their options especially when there is an element of risk or uncertainty involved. When there is a chance of gain or loss people are more likely to carefully study their options and make their decisions based on their self-interest to maximize their profits. People are more likely to consider the expected utility from their decisions instead of considering the absolute returns.

The theory was developed after analyzing and studying how humans make decisions when different risky options are offered to them. The study concluded that humans are naturally loss averse, which means that they want to avoid loss at all costs. This theory can be applied in many fields of life but in economics, it holds a lot of importance.

V is the total or expected utility that is to be gained by the outcomes. x1, x2…,  are the expected outcomes. P1, P2…, Pn are the probabilities for each outcome respectively and v is a function that assigns a value to the outcome.

The prospect theory proposes that there are two phases of decision making which are as follows:-

This is the initial stage of decision-making when the individuals enlist all the characteristics of the presented options. At this stage the individuals frame their options and based on the choice of words their decisions are influenced, this is known as the framing effect. This explains the power of words when it comes to decision-making, people’s decisions are highly influenced by the choice of words and methods used to present the option.

This is the second stage of decision making at this stage the individual tends to analyze all the options carefully and weigh each option based on its pros and cons. People make decisions based on their self-interest and are most likely to choose the option that maximizes their utility. Each option is carefully studied and analyzed for its expected outcome using the method of statistical analysis.

The prospect theory has many features and characteristics, some of which are as follows:-

a) The level of certainty

When individuals are making decisions, they tend to ignore the small or insignificant probabilities or chances of something occurring. If there is a very small chance of something happening, then decision-makers do not tend to consider that uncertainty.

It has been studied that most decision makers instead of focusing on their final income or final wealth are more focused on the relative loss or gain. If their current position does not improve by making any following decision, they will not go for that option. People often compare their positions with their friends and family members and want to look financially equal or better than them.

In order to have a better understanding of the prospect theory it is important to take practical examples. For example, let’s consider an investor wanting to buy a mutual fund. He visits two different advisors for consultation. The first advisor gives a pitch to the investor presenting a positive aspect of the fund highlighting that the mutual fund has had a return of 15% for the last four years.

The other advisor presents the risky aspect of the mutual fund explaining that even though the returns of the fund have been above average, the fund is in decline for two years now. After considering both pitches it is most likely that the investor will buy the mutual fund from the first advisor who presented the gains of the fund.

One of the greatest criticisms that this theory has received is because of its lack of explanation for the process it backs. There is no psychological explanation behind why people behave differently when their options are presented differently. Another big gap in the theory is the absence of important factors that influence the decision-making process such as emotions, values, and ambitions of the people.

To conclude, the prospect theory explains the behaviour of decision makers and the fact that they compare their options carefully and choose the option with less expected loss. It has been proposed in this theory that most people are risk averse, and they are most likely to choose the option that has less uncertainty and more probability for gains.

Another important factor that makes a huge impact is the choice of words and methods that are used to pitch the options. If individuals are presented with options that hold the same properties and characteristics, but they are presented differently then people will choose the option that has been presented positively. Decision makers want to choose the options that hold more benefits and which can improve their relative conditions.