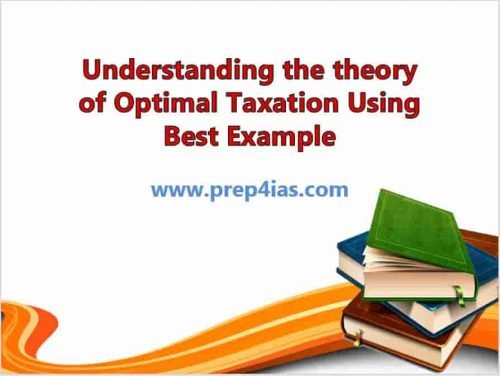 In this article, we shall discuss the optimal taxation system. Taxes are collected all over the world, it is a way for the government to collect revenues for development and other purposes. There is various form of taxes and countries all over the world use the different taxation system to optimize their revenues. Over the years there has been a lot of research on how the welfare of society can be optimized by the efficiency of taxation systems.

What is the theory of Optimal Taxation

Tax is an important tool for the government to gain funds from the public to then spend on the larger welfare of the entire society. The government uses tax revenues for various development purposes i.e., building schools, and hospitals, improving infrastructure, or providing life facilities to lower-class citizens. The theory of optimal taxation purposes the most efficient way of developing and implementing a tax strategy that maximizes a function of social welfare that has various economic constraints.

Most often the welfare function is some sort of utility function that aggregates the utilities of individuals to present the maximum utility of the masses. Tax policies can have various impacts on taxpayers, and it also impacts consumer behaviour. For example, if tax is increased on a certain commodity the consumers start to demand that product less.

Hence, the problem with optimizing the benefits is related to minimizing the distortions resulting from the tax application. Some forms of taxes are considered to cause fewer distortions such as Lump-sum taxes in which it becomes impossible for the consumers to change their behaviours to avoid tax. In his very famous book “wealth of the nations”, Adam smith stated that good tax policies are based on four criteria, which are as follows.

The policymakers are the utilitarian whose job is to make sure that the benefit and welfare of the society as a whole are optimized. The policymakers consider the utility function of different individuals to make policies that would potentially optimize the utility of the majority of society. To make this theory much simpler, economists tend to assume that all individuals in society have the same preferences and utilities. The goal of the social planner is to implement a tax system that shall maximize the utility of the presented individual. The individual must respond to the incentives that the tax system is providing him with.

After setting a utility or objective function the next step is to determine the constraints that the policymaker shall make while developing a tax system. A very famous economist Frank Ramsey stated that suppose that the policymaker has to raise a certain amount of revenues only through taxes only on commodities.

He proved that taxes must be imposed in inverse proportion to the elasticity of the demand for the specific good. Hence, the goods and services that have more inelastic demand must be taxed more heavily. This conclusion has had a very powerful impact on tax theory. But the main problem is that if all constraints are eliminated by the policymakers to simplify the tax system then it would not work.

The Broad Base Tax Rate

The broad base tax rate is the one which maximizes the preferences of tax for the goal of achieving greater revenues at a given tax rate. The strategy is to broaden the portion of income that is subjected to taxation. It is often implemented with a decrease in the rate of tax. While calculating their tax liability individuals can exclude certain portions of their incomes through exclusions and credits. This results in the reduction of revenues that could have been collected if all the income was taxed at the present tax rate.

Lump sum tax systems are used rarely because it does not characterize individuals according to their social status. Everyone rich or poor is taxed equally, this creates a very unfair burden on poor people. We have a real-life example of this tax system. When Margaret Thatcher became the prime minister of the UK, she implemented a lump sum tax system at the local level, this infuriated the public. This happened at the beginning of the year 1989, a time when the tax was very unpopular.

The New York Times published an article in 1990, that people were furious over the new tax laws, and it is a threat to Thatcher’s political regime, her life and personal safety were also threatened. This law created a huge backlash against her philosophy of public finances, in which goals and efficiency are given more importance than social welfare.

As a result of immense public protest, the tax laws had been taken back but this strategy ended the regime of Thatcher as the prime minister of the country. Hence, it must be taken into consideration by the policymaker that all taxpayers are not the same, it is easy for the rich to give taxes, but it is an immense burden on the poor.

Are developments in the theory of taxation impacting tax policies positively around the world? Whether or not the research and studies are positively impacting tax policies, the answer is quite complex. Consumer behaviour and economic factors are different for each country. Some countries have developed a good and efficient tax system, which is approved by the population of the country.

While other countries are still struggling with their taxation policies and cannot develop a system that brings the majority into the tax bracket. The governments must establish strict and foolproof laws to avoid any difficulty while collecting tax revenues. Many people still find a way to escape the tax net and do illegal things to avoid paying taxes.

Corruption is also a major reason for the faults in the tax systems, leaders and influential parties provide tax incentives to the industries that help them increase their power and political approach. People do not pay taxes if they fear that government officials are not going to utilize their funds efficiently. The theories on optimal tax have helped policymakers in understanding how the welfare of the entire society can be prioritized by making sure that taxes are implemented according to the gender, wealth and income of the individuals.