The third Roman Emperor, Gaius Julius Caesar Germanicus, also known by the nickname Caligula, ruled for only four years, from 37 to 41 AD. It's challenging to distinguish fact from fiction in the stories about the life of Emperor Caligula that have taken on legendary proportions. The son of the great general Germanicus, Caligula is best known for his despotic rule, insane behavior, sexual perversion, and extreme cruelty. However, his early reign is regarded as brilliant. According to tradition, he compared himself to an immortal God who could do anything to anyone and went on an unending streak of spending, infidelity, and murder throughout Rome.

15 Facts about the Cruelness and Madness of Roman Emperor Caligula

Also Read: The Ancient Landscape of the British Isles

His actions were so unpredictable that some questioned whether he was insane. Some of the stories about him are horrifying, while others are just plain ridiculous. Let's examine some of his most strange activities and stories about the madness that surrounded his rule, as well as how they ultimately contributed to his brutal assassination after just four years in power. However, many of them, are disputed by some historians who think that the severity of his crimes is exaggerated. 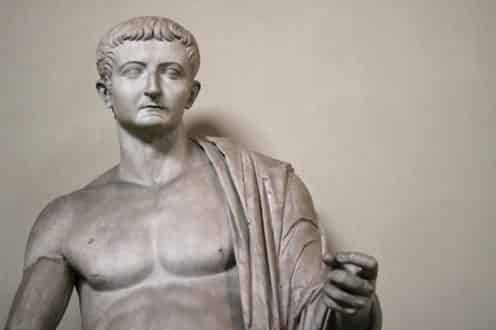 Gaius Caesar Germanicus was the real name given to this terrible emperor by his parents, Germanicus and Agrippa the Elder. He began traveling with his father on military operations when he was three years old, and his small soldier costume included little boots. The other troops found this amusing and mockingly dubbed him Caligula, which is Latin for "little boot".

Fact #2: His relationship with Emperor Tiberius was complicated

Germanicus, the father of Caligula, was the Tiberius Emperor's adopted nephew. Agrippa, the mother of Caligula, was adamant that Tiberius was responsible for the death of Germanicus. Agrippa publicly expressed her desire for vengeance, and Tiberius quickly imprisoned her and her children, where they later died. Caligula was brought to live with Livia Drusilla, Tiberius' mother because he was so young.

When he was a teenager, Caligula was sent to live with Tiberius at Capri, where he was treated like a pampered prisoner by his great uncle, even though he secretly hated him. By designating Caligula as the natural successor and subjecting him to scenes of cruelty and torture, Tiberius boosted Caligula's ego, boasting venomously that he was "nursing a viper in Rome's bosom".

Caligula initiated many political reforms at the outset of his rule, including the recall of all exiles living outside of Rome. However, something changed over the following few months, which some have attributed to serious sickness, making Caligula more erratic and insane.

Caligula’s spending spiraled out of control after he increased taxes to generate more revenue. In a well-known instance, Caligula organized the formation of a 3-mile-long floating bridge across the Bay of Baiae using hundreds of trade ships. He wore a glittering golden cape and galloped back and forth across the bridge on his horse for two days.

Fact #5: Declared the war over the sea

Caligula undertook military expeditions across the Rhine and the English Channel in 39 and 40 AD to carry on his daring father’s heritage. But after every battle was lost, he was on the verge of going insane. He engaged in a fictional battle with his army against the sea deity Neptune out of desperation to triumph. Even farther, the third-century historian Cassius Dio claims that the Trireme of Caligula sailed a short distance out to sea before coming back to shore, blowing the battle trumpets, and ordering his soldiers to gather seashells so they could exhibit them in Rome as war booty during the triumphal procession.

Fact #6: Declared himself an eternal God

"Remember I have the right to do anything to anyone" was one of Caligula’s favorite sayings, which he regularly repeated. This includes having extramarital romances with his allies wives and torturing or assassinating powerful senators who dared to disagree with him. He even made murder into a sport, randomly attacking people and instilling utter terror in those around him. According to rumors, he even had statues heads removed and replaced them with his own.

Fact #7: Detested the goat and his physical look

Caligula had sunken eyes, and thin hair, and was tall, lean, and pale. The fact that he had a very hairy body and a bald head made him a frequent target of jokes. Some others said he looked like a goat. He became conscious of his appearance as a result, and he asked the men with thicker hair to shave their heads. He declared it a capital offense, punishable by being flogged with an iron stick, to mention a goat in his presence. In addition, Caligula, according to his historian Cassius Dio, wore odd attire, women’s shoes, as well as a variety of other accessories and wigs.

Fact #8: Put a large amount of care on his horse Incitatus

Caligula was renowned for his harsh temper, but he gave his horse a lot of love. Incitatus the horse received both an ivory manger and a marble house as its very own home. Some have disputed the claim that Caligula considered elevating the horse to the consulship, one of the highest political positions in Rome.

Fact #9: Made the Gladiatorial fights a terrible sport and poisoned His rivals’ horses

Caligula transformed the gladiatorial fights of ancient Rome into a show of brutality and dominance. He was reported to have fed a portion of the audience to the beasts since they were running out on convicts in addition to having slaves and criminals sacrificed in front of an audience for entertainment.

According to another source, during using wooden swords to battle one of the gladiators, the gladiator purposefully fell, possibly in respect for the young emperor. Caligula jumped on him and killed him with a real sword. Caligula expended enormous amounts of money on athletic events and games. He constructed his own racetrack and poisoned his rival’s horses.

Caligula lived with his great-grandmother Livia (Augustus's wife) while he was an adolescent. He is thought to have formed an incestuous relationship with his sister Julia Drusilla during this time. His overwhelming love for his sisters, especially Drusilla, never stopped. She was designated Diva Drusilla upon her passing in 38 AD, being the first woman to receive such a title in Rome. He gave the order for her statue to be housed in the Venus, the goddess of love, temple.

His wives were Milonia Caesonia, Junia Claudilla, Livia Orestilla, and Lollia Paulina. The only woman to have given birth to a child with him was his last wife, Milonia. He exhibited her in front of his buddies while she was naked since she was promiscuous and vivacious. His lone kid, Drusilla, was born to him and was named after his sister.

He served gold meals to guests at his dinner parties and drank pearls that had been dissolved in vinegar.

Two large pleasure barges, furnished with marble decor, plumbing, mosaic floors, and statues, were discovered in the 1920s and 1930s from Lake Nemi, one bearing the inscription "Property of Gaius Caesar Augustus Germanicus". They were mostly destroyed during WWII. These ships were among the largest vessels built in ancient Rome and were used as elaborate floating palaces.

Fact #14: He built a bridge to contradict a Prophecy

The second Roman emperor Tiberius was friends with the astronomer Thrasyllus of Mendes. He once said that Caligula had « no more chance of becoming emperor than of riding a horse across the Bay of Baiae, implying that such an event was never possible. Caligula allegedly ordered the building of a temporary floating bridge utilizing ships as the Pontoons in disobedience of the prophecy. The resort at Baiae was connected to the nearby port by a bridge that was nearly two miles long.

The Persian King Xerxes I, who had constructed a pontoon bridge for his army to cross the Hellespont, may have served as an inspiration for him to build the bridge. According to legend, Caligula once rode his horse across the bridge while donning Alexander’s armor. Some historians say that Rome experienced a brief famine as a result of the lack of ships during this mad endeavor, while others dispute the bridge’s very existence.

Fact #15: The Roman Senate attempted to have him obliterated from history

The Roman Senate attempted to have him expunged from history. The Roman senate immediately began destroying Caligula's statues in the hope that he would be forgotten by history. However, their attempt was futile; he is still one of the most studied and written about Emperors of all time.