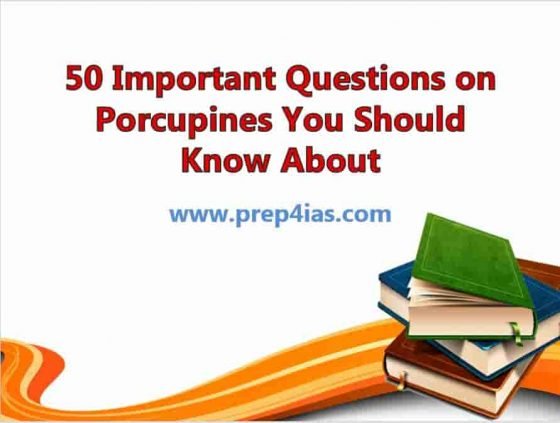 In this article, I will take you through 50 Important Questions on Porcupines that you should definitely know about. Porcupine is an animal with very unique feature in Phylum Chordata and Class Mammalia. The term porcupine refers to two families of animals - the Old World porcupines of family Hystricidae, and the New World porcupines of family Erethizontidae. Both the families are very distinct from each other. The largest species of porcupine is the third-largest living rodent in the world after the capybara and beaver. Here we will see some of the important questions on porcupines habitat, ecology, features and lifecycle.

50 Important Questions on Porcupines You Should Know About

Also Read: 50 Important Questions on Komodo Dragon You Should Know About

Ans. Porcupines are slow-moving, large rodents animals with coats of sharp spines, or quills, that protect them against predation.

2. What do porcupines eat ?

3. Where do porcupines live ?

4. Can porcupines shoot their quills ?

Ans. Porcupines cannot shoot them at predators as once thought, but the quills do detach easily when touched.

5. What is a group of porcupines called ?

Ans. A group of porcupines are called prickle.

6. How do porcupines mate ?

Ans. The male stands on his hind legs and uses his forelegs to grip her tail for balance. No male weight is transferred to the female. His relatively long penis facilitates mating, he does not need to get as close to the female as many other species.

Ans. Yes, it is primarily nocturnal, mostly active at night, but does forage during the day.

Ans. In the wild, porcupines aren't so talkative. Porcupines are solitary creatures, so there's not really anyone for them to chat with.

Ans. Yes, Porcupines are large rodents with coats of sharp spines, or quills.

Ans. While porcupines spend most of the time on the ground, they are good climbers and regularly climb trees in search of food (and occasionally are found to build nests in trees.)

11. How many quills does a porcupine have ?

Ans. The North American porcupine has about 30,000 quills, each one adorned with between 700 and 800 barbs along the 4 millimeters or so nearest its tip.

Ans. A number of larger predators like coyotes, great horned owls and bobcats will take an occasional porcupine, but these predators have little impact on porcupine numbers. Fisher, however, are effective predators of porcupines and can control porcupine populations in areas where they both live. More on North Dakota official website.

13. Where are porcupines found ?

Ans. North American porcupines are native to the coniferous and mixed-forest habitats of Canada, the northeastern and western regions of the United States and northern Mexico. Besides forests, porcupines can also be found in grasslands, desert shrub communities and even tundra.

Ans. Like most mammals, porcupines give birth to live young and do not lay eggs.

Ans. Their quills aren't poisonous, but are designed with a sharp point and barbs at the end that make them hard (and painful) to remove when stuck in another animal's skin.

16. How do porcupines attack ?

Ans. Once threatened, porcupines will chatter their teeth and produce a chemical odor to warn off predators. If the threat continues, the porcupine will turn its back, raise its quills and lash with its tail.

Ans. Porcupine can grows up to 36 inches (90 centimeters) long.

19. How sharp are porcupine quills ?

Ans. The tips of each quill are incredibly sharp and able to pierce through skin more easily than an 18-gauge hypodermic needle (about the same size of the quill).

20. Do porcupines have tails ?

Ans. Prehensile-tailed porcupines have tails that curl around branches, anchoring them to a tree.

21. Does porcupine quills grow back ?

Ans. Just as animal hair is shed and replaced, so are the porcupine's quills. New ones begin developing within a few days after the old ones are shed or removed, and they grow about one millimeter every two days until fully developed.

22. How far can porcupines shoot their quills ?

Ans. They can't shoot their quills even 1 inch. Porcupines don't shoot quills but stick them into predators by swinging their tails

23. What sound does a porcupine make ?

24. How do porcupine quills work ?

Ans. Quills are modified hairs and are covered with scales that act like fishhook barbs causing the quills to keep moving inward, deeper into the tissue. Porcupine quills can puncture the skin and move through muscle, ultimately penetrating into body cavities and internal organs.

25. What are porcupine quills made of ?

Ans. Quills are just modified hairs made out of keratin, the same substance found in our own hair and fingernails.

26. What are porcupines afraid of ?

Ans. These animals are afraid of anyone who disturb them.

27. Where do porcupines sleep ?

Ans. Porcupines are primarily nocturnal animals who rest during the day in hollow trees and logs, underground burrows or in crevices found in rocky areas.

Ans. Porcupines have been clocked at a top speed of six miles per hour.

Ans. No, they are not blind but their eyesight is poor.

Ans. Porcupines are considered to be intelligent, rapid learners with good memories.

Ans. Yes, they do drink water like other animals.

33. What are porcupines favorite food ?

Ans. Their favorite food item is corn on the cob.

34. Why are porcupines teeth red ?

Ans. Their front teeth are reddish-orange due to presence of Iron oxide in the enamel.

35. How many teeth do porcupines have ?

36. Which is the smallest Porcupine ?

Ans. The smallest is the Bahia hairy dwarf porcupine. It grows up to 15 inches (38 cm) long.

Ans. Porcupines are listed as least concern or as vulnerable by the International Union for Conservation of Nature (IUCN), depending on the species.

Ans. Porcupine color ranges from brownish-yellow to black, and they sport white highlights in their quills.

Ans. The name for a baby porcupine is a PORCUPETTE.

42. What is the biggest porcupine ?

Ans. The African crested porcupine is the largest porcupine in the world.

43. Do porcupines come out in the rain ?

Ans. During snow or rain it will remain in the den or, if outside feeding, will sit hunched in a tree, even during subzero weather, until the rain or snow stops.

44. Who is the longest living Porcupine ?

Ans. The longest living porcupine is Cooper which is living for past 32 years.

45. Does porcupine quills has any antibiotic property ?

Ans. There are some signs which suggests that quills has some antibiotic property which helps them heal their injuries.

46. Where do porcupines live in North America ?

Ans. In the United States, they roam throughout both western and northern regions.

47. Where do porcupines live in Canada ?

Ans. Porcupines are found throughout the mainland forests and thickets in Canada.

48. What do porcupines eat in the summer ?

49. What do porcupines eat in the winter ?

Ans. In winter, they eat needles and the bark of trees, such as hemlocks, birch, beech, aspen, elm, oak, willow, spruce, fir, and pine.

Ans. No, the porcupine does not hibernate, but will stay in dens during bad weather.