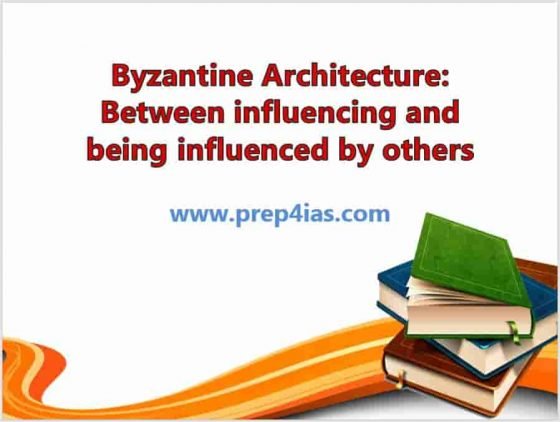 Byzantine architecture was famous during the reign of Roman Emperor Justinian from 527 CE to 565 CE. The elevated dome, the result of the most advanced sixth-century technical methods, is its distinguishing feature, along with the extensive use of interior mosaics. Byzantine church architecture was the dominant style of the eastern Roman Empire during Justinian the Great's reign, but the effects lasted centuries, and Byzantine architecture characteristics can still be seen in contemporary church designs.

Mosaics are the most common unifying element in Byzantine architecture. Mosaics depicted religious scenes as well as historical figures. Byzantine mosaics adorned the walls and ceilings of numerous churches from this era. Mosaics were created not only for the Byzantine Empire but also for many churches built by the Venetians and the Norman Kings of Sicily. The Hagia Sophia in Istanbul houses one of the most extensive collections of these mosaics. The Hagia Sophia contains hundreds of different mosaics, many of which are hidden beneath an Ottoman era plaster layer.

Long after the fall of the Western Roman Empire, the round arch, which the Ancient Romans made extensive use of, continued to be a significant component of Byzantine architecture. The round arches were the primary unique feature of the Romanesque Style, which was greatly influenced by Byzantine architectural creations. The Basilica of San Vitale's exterior features buttresses and windows with circular arches. The majority of the openings in Byzantine buildings were round arches, and they persisted in using them long after most of Europe had switched to the pointed Gothic Arch.

The development of Byzantine architecture was greatly influenced by ancient architecture, especially Greek and Roman architecture. The column capitals seen in many Byzantine structures, which all sprang from the original "big three" varieties of Greek Columns: the Doric, Ionic, and Corinthian, make this distinction quite evident. Even remains of the scrolls discovered at the tops of Ionic Columns may be seen on the column at the Hagia Sophia, which nevertheless maintains the general proportions of other Ancient Greek columns. However, the carving on this column capital was distinctively Byzantine, with various leaves, symbols, and insignias. Deep crevices between and behind these carvings give the sculpture as a whole a good amount of depth.

Since the Eastern Orthodox Church had its headquarters in Constantinople for more than a millennium, it is understandable that this branch of Christianity had a significant influence on Byzantine architecture. All Byzantine churches contain artwork and iconography from the Eastern Orthodox tradition. Between 1315 and 1321, when the Eastern Orthodox Religion had already begun to take root in several Eastern European nations, the majority of the decorations of Istanbul's Chora Church were finished.

In stark contrast to the more lavish and decadent art of the Latin Christians in the West, the art of the Eastern Christians was very different. The Great Schism of 1054 was the result of a dispute between Eastern and Western Christians over what types of art were permissible.

Both architects and builders gained knowledge from one another and their projects. Holy buildings were built and designed all over the world using Byzantine church architecture that originated in the East. For instance, the design of the enormous Hagia Sophia, the most renowned Byzantine church, was influenced by a small Istanbul attempt from the year 530 CE called the Church of the Saints Sergius and Bacchus.

This led to the construction of the Blue Mosque in 1616. Early Islamic architecture, especially that of Jerusalem's Dome of the Rock and Damascus Umayyad Great Mosque, was greatly influenced by the Eastern Roman Empire.

Two experts oversaw the creation of Byzantine structures: the Architekten, a master builder, and the rarer and more exalted mechanikos (or mechanopoios), a kind of mathematical engineer. One or both of these individuals oversaw a large team of artisans who were proficient in masonry, carpentry, wall painting, and mosaic creation. Similar to Byzantine painters, very few architects were given names after the 6th century CE. If the project involved a church or an imperial edifice, the emperor or bishop would have been engaged. In the case of private sponsors, they would have had a role in the final design of the building. The rough design drawings appear to have adhered to accepted principles and reveal extensive on-the-spot improvisation.

Bricks were used extensively by Byzantine architects, much like Roman architects, and they eventually became the fundamental component of the structure. The bricks used in Constantinople, for instance, were square and slightly larger than Roman bricks, measuring up to 38 cm (15 inches) along each side and up to 6.5 cm in height (2.5 inches). Walls were built using bricks by setting two sides down, then filling the space between them with mortar and debris. Lime, sand, and crushed brick or pebbles were the main ingredients in the mortar. A bolstering layer consisting of bricks runs intermittently through the entire wall.

Since Byzantine walls lacked a concrete (pozzolana) core, unlike Roman structures, damage to the facing gradually spread to the core as well. Another distinction is that Byzantine architects utilized a somewhat thicker coating of mortar between bricks, likely to save cost since fewer bricks were used at the time. This had the regrettable effect of causing the mortar to bend as it dried, which is why so many Byzantine structures now exhibit distortion or even partial collapse. Additionally, domes, arches, and vaults were built using bricks, frequently using bricks that were double the normal size.

Ashlar stone blocks, which were more common in the eastern half of the Byzantine Empire, were an alternative to brick. Some structures, especially in the sixth century CE, combined the two and featured a top part made of cut stone blocks and a lower section of brick. Up to the 14th century CE, these materials and their application in Byzantine structures remained essentially unchanged. The costly material marble was typically used for decorative elements like pavement, door frames, window grills, cornices, columns, and cornices.

There were some plastered building exteriors, however, this was uncommon. Building interiors received far more consideration, with most walls being covered in plaster, stucco, thin marble plaques, murals, and mosaics. More marble was used for imperial structures and significant basilicas than anywhere else, the most prevalent type coming from the island of Proconnesus in the Sea of Marmara. Because of the continuous prestige of colored marble from the western Roman heritage, it was brought from areas like Egypt and Phrygia. Wood was most frequently used to construct the roofs of homes and churches.

Sadly, some of the most stunning buildings and monuments have either been destroyed or have deteriorated. Most people who lived through the Byzantine Empire's fall faced considerable adaptations and transformations. With its innovative design, rich cultural heritage, spiritual significance, and distinguishing features, the Hagia Sophia has long battled against the passage of time. Due to its three constructions in the same location, it is the oldest cathedral.

The Golden Horn, the Bosphorus, and the Sea of Marmara surround Istanbul's "first hill" where the Hagia Sophia is located near the tip of the ancient peninsula. The current Mosque is the third building to be erected on the same spot, but it has a different architectural aesthetic than its forerunners. It was believed that Hagia Sophia changed the direction of architectural history and was the pinnacle of Byzantine architecture. 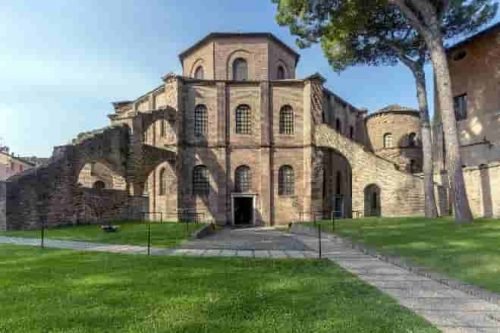 An exceptional example of Byzantine architecture can be seen on the northeastern outskirts of Ravenna at the Basilica of San Vitale. It was started under the Ostrogothic rule over Ravenna. It was constructed as a martyrium for St. Vitalis, the patron saint of Ravenna, and later became a Benedictine abbey before the mid-10th century, remaining so until it was dissolved in 1860.

Significant changes were made to the gallery and ambulatory's arches, and it's possible that the outer buttresses were built in the 12th century. Before the collapse in 1688, the southern stair turret had also been transformed into a campanile. The bema and apse were richly decorated with gestural mosaics, marble and mosaic pavements, stucco embellishments under the archways, and colored windows. The columns and chancel embellishments made of Proconnesian marble were created using the most contemporary Constantinopolitan designs. 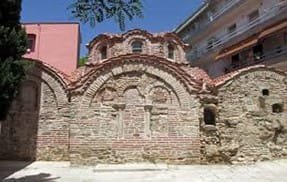 Until the end of Late Antiquity, public baths were still in use, although they were gradually replaced by modest residential baths for the affluent. By the 11th century, bath house culture had returned, with the emergence of neighborhood baths, lords' private baths, and even monastic baths.

It was situated close to a mosque and cemetery and was known as the Kule Hamam throughout the Ottoman Empire (perhaps after a nearby tower). It was significantly changed during centuries of use to accommodate various bathing customs, and it was still in use in 1940.

There are two doorways leading from the antechamber to the heated room. Along with the two large chambers of the hot room, its rooms interacted with one another. A huge dome is perched atop one of the heated chambers. The warm room's flooring is supported by the hypocausts. 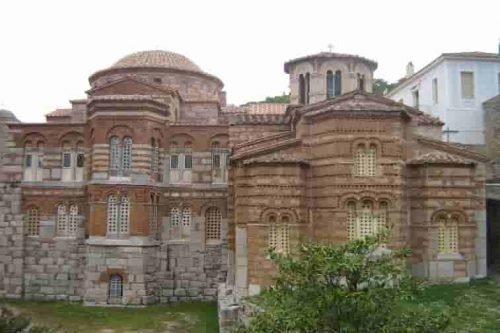 Hosios Loukas, the oldest temple in the complex, is the only one whose construction in the 10th century can be positively dated to mainland Greece. The nation's first cross-in-square structure is this centered parallelogram-shaped building, which was inspired by Constantinople's Lips Monastery. A larger cathedral church is connected to the Hosios Loukas.

The Katholikon, which has eight piers arranged around the naos's perimeter, is the oldest domed-octagon church still in existence. Four squinches connect the octagonal base beneath the dome to the square defined by the walls below, providing support for the hemispherical dome. Chapels and galleries encircle the main cube of the church on each of its four corners. The Katholikon has a big intact mosaic complex from the Macedonian Renaissance period. 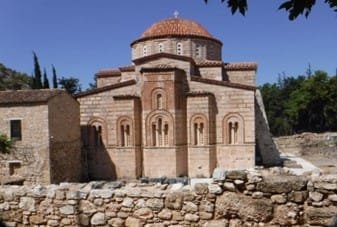 The monastery has a very spectacular defensive enclosure that is walled. Two entrances are located on the eastern and western sides of this square enceinte, which is fortified on both sides with turrets. The monastery dates to the Byzantine era, but the only part of the original square stronghold that has survived is the northern wall.

Architectural periods have no boundaries, especially during the Middle Ages. The period of Medieval architecture spanning roughly 500 to 1500 years is known as Middle and Late Byzantine. Byzantine architecture spanned from Rome to Russia and represents a period of art history that began in antiquity and ended with the beginning of the Renaissance. Many Byzantine churches and basilicas still stand today, albeit for different reasons.