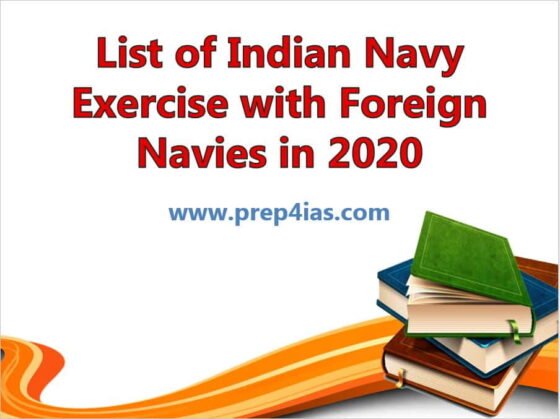 In this article, we will see all the Navy Exercises India did with Foreign Navies in the Year 2020. This is a very important topic from where multiple questions often get asked in different competitive exams.

List of Indian Navy Exercise with Foreign Navies in 2020

Indian Navy and Royal Navy of Oman (RNO) bilateral exercise Naseem-Al-Bahr was conducted at/ off Goa from January 07-10 October 2020. RNO ships Al Rasikh and Al Khassab along with IN ships Beas and Subhadra took part in the exercise. More on PIB.

Indian Navy and Bangladesh Navy (BN) bilateral exercise Bongosagar 2020 was conducted in North Bay of Bengal from 03rd to 04th October 2020. BN ships Prottoy and Abu Bakr along with Maritime Patrol Aircraft and Indian Navy ships Khukri and Kiltan along with Dornier aircraft and integral helicopter participated in the exercise.

Indian Navy and Sri Lanka Navy (SLN) bilateral exercise SLINEX 2020 was conducted in the Bay of Bengal from 19th to 21st October 2020. SLN ships Sayura and Gajabahu and Indian Navy ships Kiltan and Kamorta along with Dornier aircraft and integral helicopters participated in the exercise. Maiden landing of Advanced Landing Helicopter (ALH) was undertaken onboard SLN Ship Gajabahu during the exercise, to showcase Indian Navy’s indigenous capability.

Multi-lateral exercise between Indian Navy and US Navy (USN), Japanese Maritime Self Defence Force (JMSDF) ships and Royal Australian Navy (RAN) was conducted in the IOR from 3rd to 6th and 17th November 2020.

(a) PASSEX with French Navy: PASSEX was conducted between French Naval Ships Mistral and Geupratte and Indian Navy Ships Talwar and Trikand from 23rd to 24th May 2020 in Gulf of Aden.

(b) PASSEX with Japanese Maritime Self Defence Force (JMSDF):  PASSEX was conducted between JMSDF training ships Kashima and Shimayuki and IN ships Rana, Kulish on 27th June 2020 in Eastern Indian Ocean Region(IOR).

As part of maritime security cooperation with maritime neighbors, Coordinated Patrols along the IMBL are being conducted with Indonesia, Thailand, Bangladesh, Myanmar, as per established MoUs and Standard Operating Procedures.

To address the wide range and large spread of unconventional security challenges in the maritime domain such as piracy, smuggling, human trafficking, gun-running etc, Indian Navy has been deploying a ship in the Gulf of Aden since 2008. A total of 84 ships have been deployed to-date.

Indian Navy is committed to assisting friendly Indian Ocean Region(IOR) littoral nations in maritime surveillance. Based on the request of the host government, Indian Navy regularly undertakes surveillance of the Exclusive Economic Zone of Maldives once a month, and of Seychelles and Mauritius twice a year by deploying Indian Navy ships and aircraft.