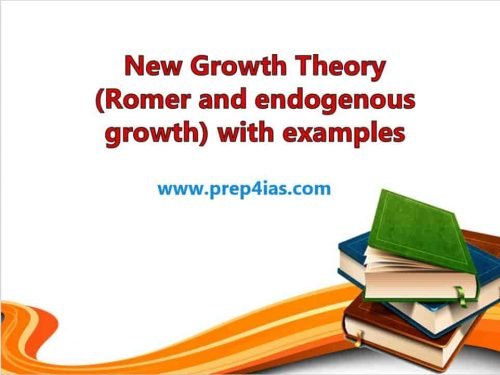 The new growth theory is a recent time concept that is based on the fact that human demand and desires for goods and services encourage production, and it also states that people have unlimited needs and wants and to fulfil those requirements they are to work more. It argues that this also increases the per capita income and total GDP of the economy.

The new growth theory makes people invent more unique products in order to gain more profit and survive the competition in the job market. Prior to this theory, it was believed that the economy is impacted by external factors which cannot be controlled but this theory states that it is the innovative approach, business knowledge and technical abilities of the population that takes the economy towards its goal.

What is the Endogenous Growth Theory ?

It is an economic growth theory which talks about the economic growth of a country driven by the internal factors rather than the external one. It considers human capital, innovation, internal knowledge and skills as the driving force of a nation's economy. More on wikipedia.

Developed nations consider their human force as their asset and invest in them just like they would invest in capital and other properties. Hence, such nations do not compromise on the health, education and training of their people. The new growth theory provided a very different perspective to modern governments and policymakers that instead of only investing in machinery and raw materials, the focus should be on training the masses to think outside the box and invent new technology because technical equipment does not get invented by coincidence it requires skills and knowledge.

Even though knowledge and training people is an asset, the law of diminishing returns does not apply to them and neither does this asset has finite benefits. Knowledge is intangible and it must be treated as a physical resource for growth. The new growth theory aims to explain the long-run growth process by targeting some endogenous forces such as:-

People seek new opportunities and humans naturally incline towards better and improved lifestyles. Many people choose their professions and career paths depending on the demand in the market. If there is a need for engineers and companies seek engineers, then more people are most likely to study engineering to get jobs easily. Hence, the motivation level and interest of people to improve their skills depend on the incentive and available job opportunities. If there are lesser job opportunities and no incentives for people to study, then people see no improvement in their lifestyle even if they acquire specific skill sets and as a result, the level of illiteracy in such countries increases.

The basic formula for production according to Romer is as follows:-

To make this concept easy to understand, Romer considered all the industries similar and as a result all industries hire the same amount of labor and capital. The final equation can be written as:-

The Romer’s model has many similarities with the Solow growth model, but it also has some significant differences. When individual firms are studied under perfect competition they operate individually and up to this assumption both the models are very much alike. But the Romer’s model differentiates from Solow’s when it assumes that the capital stock positively influences level of output when it comes to industry. Romer also included knowledge and skills as capital stock.

If we assume that a large organization offers its various departments to work individually and independently on different projects and these departments are likely to be converted into new companies. Hence, the organization is allowing the departments to nurture under its wing and then form into a separate company. The employees within these departments will work according to the newer opportunities presented in front of them. If this condition suits the employees and gives them a chance to grow professionally then more employees will work hard and strive for new ideas to make success possible.

The theory of new growth is most applicable in developed countries like the United States where companies offering services own a large chunk of the market. Such as software houses and Silicon Valley where people work on innovative projects and strive to bring forward efficient applications and computer programs to help their organizations grow. In order to apply the new growth theory, governments need to invest a large sum in their education sectors, and they also provide great incentives for their people to acquire skills and knowledge.

The governments must also make programs to ensure the sustenance of this plan which can be done by providing a peaceful and stable environment for skilled professionals, providing better job opportunities, giving benefits to people who work, providing scholarships and free-of-cost programs and inviting international companies to set up their offices in their countries. Most companies and organizations tend to overvalue human capital, but it is changing with time.

Modern organizations have started to invest greatly in the training of their employees and to create a work-friendly environment for them. The Human resource departments within companies pay special attention to keeping all employees motivated and maintaining their mental health. Such companies have observed great results in the form of increased employee productivity. This is a prime example of how human knowledge and skills can bring success and mutual progress to a nation.

To conclude, the new growth theory highlights a very key element of the economy. Human resource is an asset, and they must not be undervalued as it holds crucial importance. Technological devices and other capital cannot be operated without human supervision. Humans invent technology and come up with different ideas to drive the economy towards success. The governments of developing must invest in human capital.

Education and training must be made accessible for all at a low cost. Governments must also make adequate plans to sustain such policies and keep people motivated to gain knowledge. Job opportunities must be produced within the country to give people incentive to keep working hard and strive to sharpen their skills. Without human resources and the participation of the common people, no economy can progress.