In this article, we will discuss about Oumuamua – the first observed interstellar object in our Solar System. As per NASA Official website, it is the first confirmed object from another star to visit our solar system, this interstellar interloper appears to be a rocky, cigar-shaped object with a somewhat reddish hue. The object, named ‘Oumuamua by its discoverers, is up to one-quarter mile (400 meters) long and highly-elongated perhaps 10 times as long as it is wide. That aspect ratio is greater than that of any asteroid or comet observed in our solar system to date. While its elongated shape is quite surprising, and unlike objects seen in our solar system, it may provide new clues into how other solar systems formed.

National Aeronautics and Space Administration is an Independent US Space body responsible for all the Civil Space and Aeronautics Program. It was established in the Year 1958. It is also one of the largest Space Agency that keeps track of the most of the Sky using object like Satellites and Telescopes. Other Similar Space bodies of other countries includes JAXA of Japan, ISRO of India, ROSCOSMOS of Russia and so on.

It is the first known long and thin cigar shaped Interstellar object observed in our Solar System some two years ago.  It was found to be tumbling and was keep accelerating as if something had given a very strong push. This acceleration was found to be non-gravitational.

How Oumuamua Got its Name

The object was officially named 1I/2017 U1 by the International Astronomical Union (IAU), which is responsible for granting official names to bodies in the solar system and beyond. In addition to the technical name, the Pan-STARRS team dubbed it ‘Oumuamua (pronounced oh MOO-uh MOO-uh), which is Hawaiian for “a messenger from afar arriving first.”

On October 19, 2017, Astronomers using the Pan-STARRS 1 telescope in Hawaii picked up a very faint point of light moving at very rapid speed in the sky. When it was observed, it was about 33 million km from Earth and already moving away from the Sun.

Pan-STARRS 1 is known as The Panoramic Survey Telescope and Rapid Response System. It is based on Hawaii which consists of group of Astronomical Cameras, telescopes and a computing facility which Keeps an eye on the Sky for the detection and tracking of any astronomical objects.

How Do we Know It’s Not from Our Solar System

When we observed the Interstellar object, it was moving on hyperbolic excess velocity indicating that it is not originated in our Solar System. It must have come from outside of our Solar System.

Scientists has given some possible Planetary System Origins of this object but none of them is backed by any hard evidence so currently the Origin of the Interstellar Object is unknown. Possibility from an Oort Cloud Origin is also not excluded. 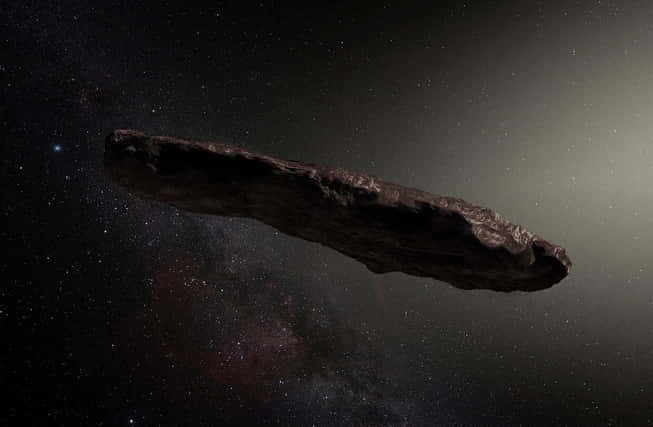 Is this a Natural or Artificial Object

While the Scientists never saw any other object like this with such high aspect ratio(10:1), still most of them believe it’s a natural object shredded out either during the process of planetary formation or due to the Supernova activities. However, there are few groups of scientists who believes it as an artificial object perhaps sent by some Aliens. But this theory is very weakened due to lack of any evidence or data.

Is it really the first Interstellar Object in our Solar System

Astronomers estimate that an interstellar object similar to ‘Oumuamua passes through the inner solar system about once per year, but they are faint and hard to spot and have been missed until now. It is only recently that survey telescopes, such as Pan-STARRS1, are powerful enough to have a chance to discover them.