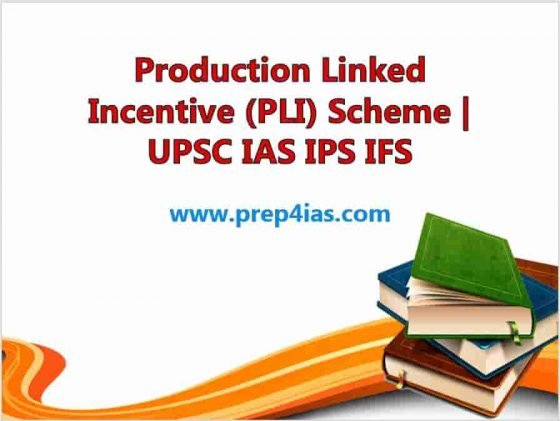 The Finance Minister announced an expenditure of INR 1.97 Lakh Crores for the Production-Linked Incentive (PLI) Schemes for 13 key sectors in the Union Budget 2021–22, which was presented on February 1st, 2021. These investments will be used to develop national manufacturing champions and create job opportunities for the youth of the nation. This means that the minimum production in India as a result of PLI Schemes is anticipated to be more than US$ 500 billion over the course of five years. More on PIB.

A major component of the government's campaign to create an Atmanirbhar Bharat is PLI Schemes. The goal is to make domestic manufacturing competitive on a global scale and to produce manufacturing industry leaders. The goal of the programme is to provide enterprises with incentives based on increased sales of goods made in India over the base year. They have been specifically created to promote domestic manufacturing in strategic and emerging industries, to lower import costs and cheaper imports, to increase domestic capacity and exports, and to improve the cost competitiveness of locally produced goods.

An additional 10 New PLI Schemes were granted in November 2020 after the initial approval of the first three PLI Schemes in March 2020. Six of the ten New Schemes have also been authorised by the Cabinet, as shown below. Of these, the prior three Schemes have been notified.

The GoI also unveiled the following 10 new PLI schemes in November 2020, in addition to the three originally announced in March 2020:

The PLI scheme's primary goals were revealed in March 2020:-

According to the Quarterly Review Reports for the quarter ending December 2020, the applicant companies have produced goods worth INR 35,000 crore and invested INR 1,300 crore under the plan in the first five months of operation, despite difficult times. A total of 22,000 additional jobs have been created over this time.

Following the First Round of the PLI Scheme's success, the Second Round of the PLI Scheme, which aims to create a thriving and strong ecosystem for the manufacture of electronic components, was introduced on March 11, 2021. The deadline for applications was March 31, 2021. For a period of four years, qualified enterprises will get an incentive of 5% to 3% on additional sales (over the base year, which is 2019–20) of products made in India and falling inside the target segment under the Second Round.

The Department of Pharmaceuticals launched a Production Linked Incentive (PLI) Scheme for the promotion of their domestic manufacturing by setting up greenfield plants with minimum domestic value addition in four different Target Segments (In Two Fermentation based - at least 50% domestic value addition). This was done with the aim of achieving self-reliance and reducing import dependence on these critical Bulk Drugs, Key Starting Materials/Drug Intermediates, and Active Pharmaceutical Ingredients in the country.

With a total financial outlay of Rs. 3,420 crores for the years 2020–2027, the Department of Pharmaceuticals launched the Production Linked Incentive (PLI) Scheme for the Promotion of Domestic Manufacturing of Medical Devices with the aim of boosting domestic manufacturing and attracting significant investment in the medical device sector.

Companies involved in the production of air conditioners and LED lights will receive an incentive of 4% to 6% on additional sales of products made in India under the PLI Scheme for White Goods for a term of five years. The PLI Scheme is intended to develop a whole component ecosystem in India and integrate it into global supply chains. The programme will be crucial in removing sectoral barriers, fostering economies of scale, and assuring efficiency to make Indian manufacturing competitive on a global basis. The programme is anticipated to draw in foreign capital, create a significant amount of new jobs, and boost exports.

Additionally, it will encourage financial expenditures in technological advancement, innovation, and research & development. The Scheme is anticipated to play a key role in achieving growth rates for the AC and LED industries that are significantly greater than the current ones, in the development of complete component eco-systems in India, and in the creation of manufacturing giants in India. The Scheme is anticipated to be beneficial to a variety of domestic and international businesses, including a number of MSMEs.

The PLI Scheme is expected to have the following results over the course of five years:-

The outcomes/benefits expected from the scheme are:-

The Cabinet approved the Production Linked Incentive Scheme for the Food Processing Industry on 31.3.2021 for deployment from 2021–2026–27 with an outlay of Rs. 10,900 crores. The programme is primarily designed for Indian businesses and MNC subsidiaries doing business in India that sell a minimal amount of food goods made in India. The Ready to Cook/Ready to Eat (RTC/RTE) section, which includes millet-based foods, Processed Fruits & Vegetables, Marine Products, and Mozzarella Cheese, is one of four food categories that the programme will promote investment in.

The PLI Scheme for Telecom and Networking Items was announced by the Department of Telecommunications on February 24, 2021, with a budget of Rs. 12,195 crores spread over five years for these products. India will become a major producer of telecom equipment, including Core Transmission Equipment, 4G/5G Next Generation Radio Access Network and Wireless Equipment, Access & Customer Premises Equipment (CPE), Internet of Things (IoT) Access Devices, Other Wireless Equipment, and Enterprise equipment like Switches and Routers, among others, thanks to the PLI Scheme in Telecom and Networking Products.

According to estimates, using all of the Scheme funds will likely result in an incremental output of about 2.4 lakh crore and exports of about 2 lakh crore over the course of five years. Additionally, it is predicted that the Scheme will attract investment of about 3,000 crores and create a significant amount of direct and indirect employment.

On March 3, 2021, the PLI Scheme for IT Hardware was announced. The deadline for applications is April 30, 2021. For a period of four years, the scheme will offer qualified companies an incentive of 4% to 2% or 1% on net incremental sales (over a base year) of products made in India that fall under the target market (laptops, tablets, all-in-one PCs, servers). The programme is projected to be advantageous to both domestic and international large producers of servers, laptops, tablets, and all-in-one PCs. Given that there is now a significant reliance on imports for these goods, this market is crucial for promoting production.

On February 24, 2021, Cabinet gave its approval. The following are the approximate predicted results under the programme (summarised over a period of six years). Additional sales of Rs 2,94,000 crore, exports total of Rs 1,96,000 crore, Investment Spending of Rs. 15,000 crore and a total of 100,000 jobs will be created.

The government devised the Production Linked Incentive Scheme, also referred to as the PLI plan, in order to promote production, generate employment, increase exports, and decrease imports. It currently comprises 14 significant industries and represents a $3 trillion investment. The PLI programmes aim to close the huge gap between the world's economies and India's import-export basket, which is mostly made up of massive imports of raw materials and completed goods. The PLI plans should, in theory, make it easier to produce items in India, lowering the nation's reliance on imports in the short term and raising exports from India over time.