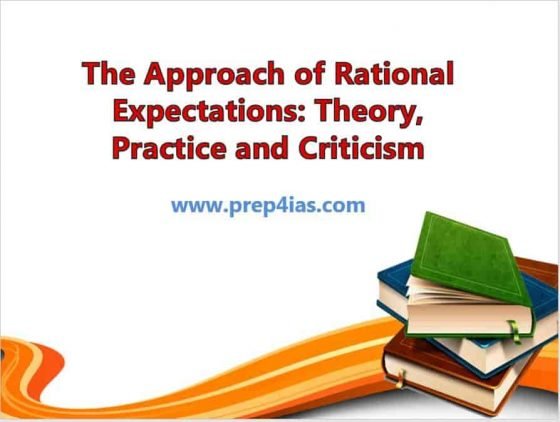 The approach of rational expectations proposes an insight into how participants of the market make their decisions depending upon their predictions about the future. All the available information in the market regarding any stock or asset influences its price level in the market. The theory of rational expectations has been acknowledged as relevant by many economists but at the same time, the theory has also had many variations and changes over the years. In this article we shall discuss the purpose of this theory and why has it received criticism from some economic experts.

What is meant by Rational Expectations ?

Rational expectations is a theory that proposes that consumers in the market make their decisions after considering all the information available about the asset. Consumers also analyze all the previous trends before making any move. Rational expectations theory states that consumers study the market carefully before investing their money in any asset and there are chances of them being wrong even after researching but there are more chances of them being right.

The Approach of Rational Expectations: Theory, Practice and Criticism

The theory of rational expectations was introduced in the year 1961 by a very famous American economist John F. Muth but the theory was highlighted by two other economists named Robert Lucas and T. Sargent. In the 1970s this theory came to the limelight as an important part of the classical revolution in microeconomics. The theory explains that people tend to learn from the mistakes in the past and make decisions to avoid failures. Forecasts and predictions made about the market are also based on the information that is available in the market about the asset. Some people also make investments based on the predictions and analyses made by some market experts.

People do not only consider microeconomic conditions before making decisions, but they also understand the importance and influence of macroeconomic factors on the prices and trends of stocks. Many government policies have a direct influence on factors such as exchange rates, interest rates and aggregate output. Hence, external factors also play a crucial role in altering the behaviour and decisions of investors. Many macroeconomists in modern times consider the theory of rational expectations as a major assumption while drafting policies. Policymakers must consider the impact their policies shall have on the behaviour of the investors. A boost in investments is a great push for the economy for its progress.

The theory of rational expectations is divided into two types. The first version of the theory is the strong version which states that all the participants of the market have easy access to all the available information regarding the stocks and that the participants make their decisions after analyzing all the internal and external factors impacting the price rate of the asset. The weak version of the same theory suggests that although all the participants in the market have access to the same information still some participants do not engage in research or do not have the time to gain complete knowledge about the asset before making their decisions and end up making uninformed poor decisions.

For example, if a consumer always buys a certain brand of cooking oil and does not engage in research about the nutritional properties and price rates of other brands then it is a weak rational decision.

In macroeconomics, the approach of rational expectations is used for analyzing the accuracy of forecasts made regarding inflations. Let us assume, P’t as the prediction made by someone regarding any year t-1 about the rate of inflation in the year t. The actual inflation level can be indicated as Pt. Now, the error in the prediction regarding the price level made by the individual can be found by subtracting the forecasted inflation rate from the actual price level in the economy. It can be written as,

According to this theory, the error in predictions can occur due to the factors ignored by the individual while calculating future price levels. But, if in any case the decision maker consciously under or overvalues certain factors then the decision will not be a rational one. The theory also states that even though current decisions can be made depending on the predictions for the future, it is also true that the future unfolds depending on the conditions set in current times. This theory of rational expectations also compliments the Keynesian theory which states that consumers and investors make decisions considering only their self-interests. If people do not expect rationally the decisions, they will make will not be considered rational.

While the theory of rational expectations suggests that the participants of the market make their decisions based on all the available information and data available in the market, the adaptive decision-makers on the other hand tend to believe that making decisions based on the previous trends and events is a more efficient way of making decisions. This technique is also known as backward thinking in making decisions. This technique is also used by many macroeconomists to predict trends of many important economic factors such as inflation.

For example, if the inflation level in the previous years was high then it is believed that in the following year the inflation rate will also be high. The adaptive expectations approach can be formulated as:-

This formula shows that people expect inflation to follow the same trend as it did in previous years. But it is also true that people will most likely change their predictions if there is any change in the circumstances. If any new condition appears, let us assume, a new policy is implemented by the government to control inflation then people will change their expectations regarding the price levels.

There has been some criticism of the theory of rational expectations from some famous economists. The biggest flaw in the theory is the fact that it suggests that every induvial has easy access to all the information in the market or to say that all the participants in the market will have the same expectations after analyzing the conditions of the market. Individuals do not possess the knowledge or the same level of insight to carefully study all variables impacting the price levels and the parameters of the economic model.

The theory of adaptive expectations was somewhat better in this regard as it was simple and proposed a much more practical approach to decision-making.  In short, the theory of rational expectations expects too much from the decision makers, all the participants can't possess complete knowledge about all the internal and external economic factors. Gathering information and having access to it is a rather expensive deal.

To conclude, the theory of rational expectations explains how consumers and individuals make decisions about their savings and spending. Rational expectations approach means that individuals spend in the current times according to their expectations about future incomes. The theory proposes that if people expect that they will be earning more than their current income in the future then they are more likely to spend more in the present. This theory has proved right in many instances but there is also prove against this theory.