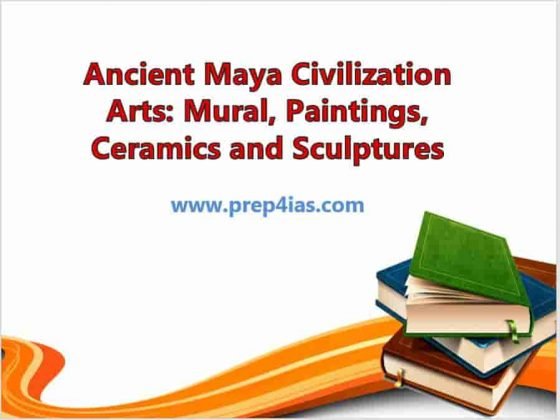 In this article, we will look at several aspects relating to Maya art. Why did they create art and what did it stand for? What types of art did they create? Finally, the change of Mayan art over the time and the impact of this art on the other civilizations?

For many interesters, the ancient Mayan civilization is different, fascinating, and even a bit scary. The end of the Mayan calendar in 2012 has given rise to a revived interest in Mayan history, culture, art, and architecture. Until today, we still enjoy the conspiracy and mystery of the Mayan culture. Mayan art in particular is a subject worth taking a closer look at.

The Maya civilization flourished between 1800 BCE and 900 CE, reaching its peak in the sixth century CE. They were in Mesoamerica, which includes present-day Mexico and Central America. The Maya produced a wide variety of artworks throughout this time, especially in the form of stone sculptures, murals and paintings, and amazing architecture. Religious themes dominated a lot of Maya art. the Maya people also used Stelee, which are vertical stone slabs. The Maya used stelae because they could be used for inscriptions in their written hieroglyphic language as well as represent gods, significant rulers, and animals with supernatural significance.

The Maya were an agricultural society that depended on products including cassava, maize, beans, and squash. One of the earliest significant civilizations, the Olmecs, emerged in 300 BCE. Many other societies influenced by the Olmecs in Calendars and numbering systems and some other religious and cultural aspects. The Maya Empire reached its height of power during the Classical Period (250–900 CE). They were extremely devout people who erected pyramidal temples to honor their gods.

They also developed the Long Count Calendar, by building on the Olmec calendar. Instead of establishing a single, centralized government, they created city-states, which allowed their leaders to keep control over their numerous cities. The different city-states frequently used marriage as a means to forge relationships. 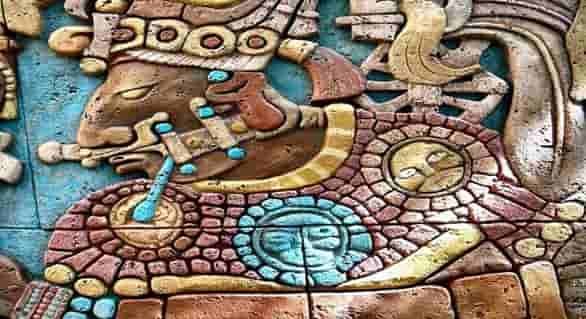 In 900 CE, the Mayan Empire began to collapse. It is not clear why this occurs. There are many hypotheses by scholars, some speculate that it was the war between the various city-states that caused the collapse, while still others argue that an environmental disaster, such as a prolonged drought, wiped them out. Although civilization no longer exists today, the Mayan art style survives thanks to its many artistic creations.

The Maya employed a range of artistic techniques to represent the things that were essential to them. Deities, significant political individuals, and specific animal motifs are usually portrayed in Maya art. Their works of art also depicted historical events and everyday life. They built magnificent temples that resembled stepped pyramids to be used as places of worship for ceremonial purposes. Their buildings’ interiors were frequently adorned with wall paintings and murals that portrayed both religious and ordinary life scenes.

The Mayan people were skilled ceramicists, producing storage vessels with a variety of colored motifs and patterns They also created books out of tree bark to preserve their writings and created their own written language using glyphs. For their artwork, they employed a range of materials, including wood, stone, and molded plaster.

Murals are huge-scale paintings created by the Maya that cover large areas of wall space. Maya murals are still widely spread today. These murals frequently show people who would have held prominent positions in Mayan society or various religious situations that illustrate the Mayan faith.

the Mayan paintings that have been discovered depicted the lives of common people, such as farmers of maize, beans, and tobacco, in contrast to the vast majority of murals that show royalty and other prominent figures. The Maya style of construction, which involved building over the ruins of ancient structures rather than demolishing them and beginning from scratch, allowed for the preservation of these paintings, which can be found on the walls of the inner levels. Deities and regal beings are frequently shown in Mayan paintings.

Maya ceramics was handcrafted. They imported clay occasionally from other city-states as well as obtained clay of various sorts and colors from the surrounding areas. The substance would then be tempered to give it a certain consistency. This latter has been imported from the Guatemalan highlands, which are home to a volcanic terrain, and these tempers included ground limestone. The pottery would be coated in mixes of various minerals suspended in water to give it distinct colors and patterns.

Artists gave shape to materials taken from the terrain to create souls obtained them manifest or talking with them.

The Change of the Ancient Mayan Art over Time

A dynamic culture, Mayan art has evolved over thousands of years according to place and time. The Classic Period, from 250 to 900 CE, is generally regarded as the peak of Ancient Mayan art. Many Mayan kingdoms reached the pinnacle of their power and wealth during this time. Mayan cities competed for and shared knowledge and goods from Southeast Mexico to Honduras. Cities were able to produce gigantic temple carvings, priceless jewelry, and exquisite paintings, leading to the arts’ greater specialization.

Palenque was possibly the most artistically advanced city. Palenque ruins are renowned for their sophisticated architecture and well-crafted items, despite being smaller than other contemporary kingdoms.

Many of these Mayan kingdoms suffered catastrophic collapses and were abandoned at the end of the Classic Period. The prevailing view is that this occurred as a result of conditions like drought, population growth, and strict cultural norms that made adaptation challenging. Even if certain cities continued to exist, the Maya civilization’s splendor was over. A few hundred years later, the majority of the Mayan population would be subjugated and its cultural heritage would be decimated due to interaction with Spanish explorers and conquerors. The artwork created by the current Maya people represents both their cultural past and the glory of their civilizations.

The Impact of Ancient Mayan Art on Other Civilizations

The Maya was one of the most enduring and significant civilizations in the history of the Americas. Along trade routes, their advances and trade products rapidly made their way north and south. The Olmecs, Aztecs, and the enormous city of Teotihuacan were just a few of the Mesoamerican civilizations that were greatly influenced by Mayan art. Of course, you could notice themes and imagery that are still relevant today. The Mayan style is still very much in use today, and it is now honored by artists all around the world.

The Mayan civilization was exceptionally wealthy and advanced for its time. It possessed every aspect of a successful society, including government, religion, science, and, most importantly, art. Ancient Maya artifacts are still stunning and fascinating. By the events of the sixteenth century, courtly culture was destroyed and the Maya creative legacy was ended.

Despite the attempted removal and dwarfing of the Mayan civilization legacy, especially the artistic one, which can be discovered in thousands of museums published in many Latin American countries, the existing Mayan peoples still to this day boast the heritage of their ancestors and art presented by their civilizations that were influenced by previous civilizations. And everyone interested in the history and art of the Maya is still fascinated by the amount of art that this civilization produced.