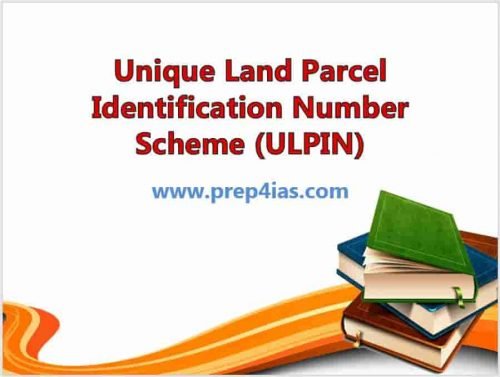 The ULPIN programme, which stands for Unique Land Parcel Identification Number Scheme, started in 2021. It is a component of the 2008-started Digital India Land Records Modernization Program (DILRMP). By the end of 2022, the Department of Land Resources of the Ministry of Rural Development aspires to have it operating in all states and UTs.

The government wanted to improve access to land-related information while also maximizing the nation's use of its land resources. The Indian Central Government created the ULPIN as a reliable and well-organised method of collecting geographic data. The ULPIN, in accordance with the government, guarantees that each land-related transaction is distinct and that each land title is up to date.

The abbreviation for the unique land parcel identification number is ULPIN (Unique Land Parcel Identification Number). As the name implies, it is a unique number for lands. The ULPIN functions similarly to an Aadhaar card for real estate. It has a 14-digit unique alphanumeric identification number, and this ID includes the provenance, length, longitudinal and meridional measurements.

The unique number contains sensitive information about the landowner, such as their age, location, sexual orientation, banking information, and other specifics about the property they own. An official conducts a thorough survey of that parcel of land or uses a reliable study to generate the unique ID number for that land area. Spatial cadastral maps are also used during the process.

Geo-coordinates are frequently used to identify latitudes and distances, as shown in ULPIN Odisha or ULPIN Bihar, two more Indian states where this approach is used. The Digital India Land Records Modernization Program, which started in 2008, will expand in scope and depth. The unique land parcel identification number scheme's primary goals are to:-

This includes surveying and resurveying as well as computerizing registrations and land records. Real-time property ownership, full access for everyone, complete visibility, the elimination of stamp papers, payment of council tax charges via banks and online, and a reduction in the RoR (record of rights) based on deadlines are some of the objectives. Future developments include less litigation, automated mutations, and more evident titles.

All land registries and related operations will be available thanks to the ULPIN. It will help keep land records current. Communication over land titles will be more uncomplicated between ministries, investment companies, and all customers. Consequently, residents can contact the services for historical land records through a little window.

In addition to preserving state property, the plan will simplify the process of buying land. This is also a financially sensible plan for the government. Aadhaar data will need to be sown and verified for each landowner, costing five rupees apiece, while using ULPIN to link Aadhaar with title documents will cost three rupees each.

Once a piece of land has its unique number or ULPIN, officials have access to the information pertaining to it, enabling them to provide correct data to farmers and other groups and plan accordingly. Land-related disagreements between individuals will either be non-existent or extremely rare. With time, these disagreements will drastically decrease. The ULPIN software helps in the creation of data on land and property. Providing correct land data aids in the Integrated Land Information Management System's development.

The Integrated Land Information Management System, or ILIMS, the plan will benefit from the ULPIN program's assistance in establishing this complete territorial bank. Each plot will also have a 14-digit alphanumeric ID, as was already mentioned. Geo-referenced sites for the landed property and international standards would serve as the foundation for the particular unique IDs. They will align with this organization's standards and those of the Open Geospatial Consortium, enabling increased expansion throughout all Indian states.

The primary goal of the DILRMP is to replace the current system of presumptive titling and deed registration with conclusive titling and a title guarantee. Other goals of the plan include:-

The anticipated costs for some of the new projects were stated in the Department of Land Resources' presentation to the legislative panel. It noted that seeding and validation of landowner Aadhaar data would cost ₹5 per each while linking Aadhaar with land records using ULPIN would cost ₹3 per record. It further stated that the Aadhaar numbers would be voluntarily integrated with the land registry database.

It would cost ₹50 lakhs to build a state-of-the-art land record room in each district, while it would cost ₹270 crore to integrate land records with the Revenue Court Management System. It further said that the "linkage of land record database with banks" will be part of the following phase of the DILRMP. The Department has suggested extending the programme through 2023–2024.

The public would gain a lot from the Unique Land Parcel Identification Number Scheme thanks to a single information source that would facilitate property verification and address any issues relating to contested landholdings. It will secure government property from scams and fraudulent transactions while making it simpler to recognize. The ULPIN system effectively protected public property from unauthorized usurpation by supplying unique IDs. In addition, it has made purchasing land simpler.