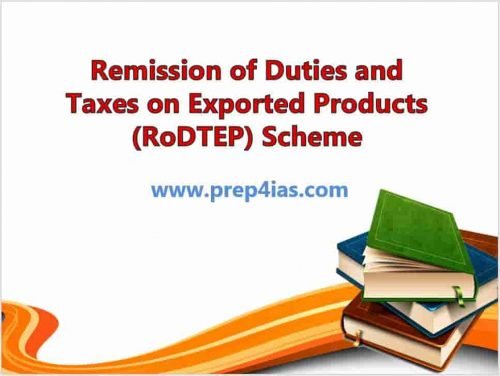 A new programme called the Remission of Duties and Taxes on Exported Products (RoDTEP) Scheme was created to replace the current MEIS and is effective as of January 1st, 2021. (Merchandise Exports from India Scheme). The Central Board of Indirect Taxes & Customs (CBIC) issues the refund as a transferable electronic scrip in an all-encompassing IT system. The foundation of RoDTEP is the widely acknowledged idea that taxes and tariffs shouldn't be exported and should be waived or paid to exporters.

The programme would make sure exporters get their reimbursements for embedded taxes and tariffs that were previously non-recoverable. The program's goal is to increase exports, which are currently performing poorly.

Remission of Duties and Taxes on Exported Products (RoDTEP) Scheme

The Remission of Duties and Taxes on Exported Products (RoDTEP) Scheme was introduced to promote exports in the nation by lowering duties, providing exporters with simple refunds of various taxes, offering an automatic refund route for ITC to prevent the cascading effect of taxes, and aiding exporters in adhering to international export standards.

Regardless of their revenue, this programme is available to all industries involved in exporting goods. Providing that India is the country where the exported items were made. Labour-intensive industries, however, ought to be given higher precedence than other sectors. Under this programme, products exported via e-commerce platforms are also eligible.

The programme is open to both manufacturer and merchant exporters (traders), who are qualified to take advantage of its benefits. For the RoDTEP to be claimed, there is no set turnover requirement. Re-exported goods are not permitted under this programme. The exported goods must have India as their country of origin to be eligible for this scheme's advantages. The benefits offered by this programme are also available to export-oriented and special economic zone units. The Remission of Duties and Taxes on Exported Products (RoDTEP) Scheme applies to products exported by couriers through online shopping platforms.

Re-export of imported commodities where the nation of origin is the third country is an ineligible sector under the RoDTEP Scheme. Export goods covered by export duties or the minimum export price, Deemed Exports Supplies of goods produced by Domestic Trades Areas (DTA) units to Special Economic Zone (SEZ) or Free Trade Zone (FTWZ) units, Goods produced in EHTP and BTP, Goods produced or exported by a unit licensed as a 100 percent Export Oriented Unit (EOU) in accordance with the regulations of the Foreign Trade Policy, Goods produced or exported by any of the Units Located in Free Trade Zones or Special Economic Zones (SEZ), Exports for which.

Under this specific programme, mandi tax, VAT, coal cess, central excise charge on fuel, etc., will now be reimbursed. Currently, the RoDTEP Scheme is responsible for all goods covered by the MEIS and the RoSTCL (Rebate of State and Central Taxes and Levies). The digital platform's implementation has dramatically accelerated the approval process. To ensure the efficiency and correctness of transaction processing, the exporters' records will be verified using an IT-based risk management system.

Details on the credits that exporters have withdrawn are available on the ICEGATE (Indian Customs Electronic Gateway) webpage. In order to collect this RoDTEP advantages for certain export commodities, the exporter must fill out a bill of lading and produce a credit memo with the necessary information at the port. When necessary, these credits be transferred to other importers or utilised to pay basic tariffs and make rebate claims.

Steps to Generate and Claim Scrips

The following steps must be followed to generate and claim scrips under the Remission of Duties and Taxes on Exported Products (RoDTEP) Scheme:-

The exporter can access their account and choose the appropriate bill of lading to construct the scrip after creating the RoDTEP credit book account. The refund is available for payment of applicable tariffs during importation or remittance to other importers once the scrip has been prepared. It is credited and shown in the exporter's G/L account.

The documents required to apply for Remission of Duties and Taxes on Exported Products (RoDTEP) Scheme:-

Indian goods will become competitive in international markets thanks to the reimbursement of taxes, including duty on electricity charges, value-added tax on transportation fuel, and farm sector taxes, among others. Over the next five to ten years, it is anticipated to substantially influence India's exports, trade flows, and competitiveness.

Indian exporters would be able to comply with international export requirements thanks to the availability of reasonably priced testing and certification within the nation rather than depending on external entities. The nation's GDP and the business's working capital would grow.

Additionally, it provides for the complete automation of tax assessment for exporters. Businesses will use an automated refund channel to access their GST (Goods and Services Tax) returns. The Remission of Duties and Taxes on Exported Products (RoDTEP) Scheme will be in effect till 2025 or until a new scheme comes in to replace it, and the scheme subsidizes the total merchandise exports of India.

A proportion of the exports' freight on board (FOB) value would be used to calculate the refund under this plan. It will range from 0.01% to 4.3% for taxes and tariffs to be reimbursed (maximum limit). While the return rate for products like shirt materials is 4.3%, it would be 0.01% for items like jewels and jewellery.

The WTO determined that five Indian export subsidy schemes were against WTO rules and regulations in 2018 after the US challenged them at the WTO. In the end, the panel suggested that the Indian government discontinue these programmes in October 2019. Along with integrating the programmes like MIES and the RoSCTL scheme, which were not WTO compatible, the remission of Duties and Taxes on Exported Products may be considered a significant step towards a boost in the export industry of the nation. This programme's commencement is anticipated to substantially impact India's ability to compete internationally during the next 5 to 10 years.