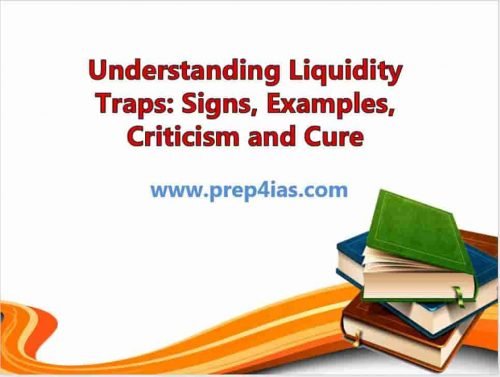 In this article, we shall discuss the concept of liquidity traps and how such conditions impact the overall economy. A liquidity trap is an economic situation in which the interest rates become very low almost close to 0%, and on the other hand, the saving rates increase potentially. This dynamic makes monetary policy ineffective. The reasons behind this phenomenon, its consequences and solutions will be discussed in depth in below sections.

The concept of liquidity trap was first explained by a very renowned economist John Maynard Keynes. When the condition of a liquidity trap exists, people choose to not invest in bonds and instead they choose to save their money in cash, this is due to the uncertainty and fear that interest rates may rise back up anytime soon. Interest rates and bond prices have a negative relationship, as the interest rate increases, bond prices decline.

Monetary policy is the policy adopted by the central bank to control the economic situation within the country. When a liquidity trap exists, there is no way for the central bank to control the economy as they cannot further lower the interest rates to provide incentives to the consumers. The main reason for this condition is that in times of uncertainty people like to hoard their money instead of investing in higher-yielding investments.

The impact of liquidity trap does not only impact the bond market, but it also strongly impacts the other aspects of the economy. For example, when people save more than consume it impacts the demand for products ultimately causing loss to local businesses.

Further because of liquidity traps consumers people do not hold their savings in other investment systems instead of checking or saving accounts, even though the central bank puts in additional funds to incentive consumers. People like to keep their cash or save their money in the most liquid way possible because most people are risk averse and if they foresee a change in economic conditions they do not want to invest in long-term assets. This situation ultimately makes the monetary policy ineffective.

The main reason that ignites the entire situation and instils fear in the hearts of consumers is unstable economic conditions. If people fear that in the upcoming years the interest rate is going to fluctuate or there are any chances of their investments not bearing the expected returns, they tend to save their money.

People who already hold bonds try to sell them, the sudden increase in the rate of supply of bonds decreases the price of the bonds and their interest rates tend to increase to offer some incentive but in most cases, the increased yield does not change the minds of investors. One other consequence of liquidity traps is that financial institutions have problems trying to distinguish between qualified and unqualified borrowers.

One of the biggest indicators of a liquidity trap is low-interest rates, the rate of interest directly impacts the demand and supply of bonds, and the change in the behaviour of bondholders becomes very evident. When the interest becomes low, bondholders try to sell their bonds and thus the price of the existing bonds increase.

The other indicator is that the state or central bank increases the supply of money to boost the economy and under general conditions as the money supply increases people should buy more investment instruments such as bonds, but when there is a condition of liquidity trap the money does not go towards bonds, instead people hoard this money in cash form. Alone low-interest rates do not indicate a liquidity trap but instead, there must also be fewer bondholders willing to hold onto their bonds.

Other consumers also show less interest in high-yielding assets. Hence to summarize we can say the following are the characteristics of the liquidity trap.

Examples of the Liquidity Trap

At the beginning of the 1990s, Japan was faced with a liquidity trap, interest rates were falling potentially and yet people were showing little or no interest in investing in higher-yielding assets. The country started to face deflation. The crisis was so complicated that it took years for the central bank and the federal government to bring it back to normal. Interest rates were almost 0% but it still had no impact on the other economic factors such as inflation, consumption, and investments for many years. The European central bank intervened and they suggested quantitative easing and a negative interest rate policy in some areas to eliminate the liquidity trap.

The concept of liquidity trap also received some negativity from economists, one very famous economist from Austria named Ludwig von Mises advocated the conditions and practices of the free market and capitalism. He believed that there is no such thing as liquidity traps, he explained that it is not the liquidity traps that are dangerous for the economy instead it is the interference of the central banks and the government in the market processes. Such economists believe that even if such conditions exist and there is a liquidity trap then increasing the supply of money would not solve the problem.

Some solutions have been studied by economists that can potentially solve the problem of liquidity traps. Some of the solutions are as follows:-

The liquidity trap is a condition where the economy comes to a halt, due to an economic prediction or expectation that people within the economy stop investing their money in long-term high-yielding assets and instead start saving their money in the form of cash. This leads to a shortage of money and economic activity in the market. In such conditions, the central bank usually increases the supply of money.