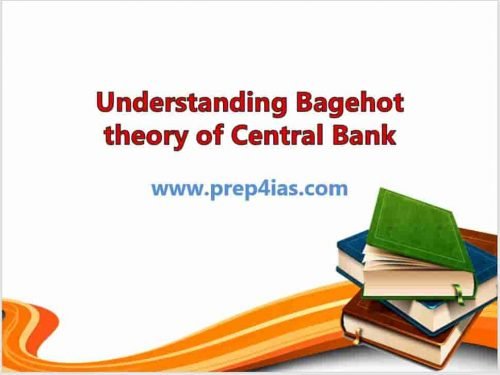 The Bagehot theory is considered very important in the banking and financial models. The theory explained how central banks can play their parts when a bank or company is on the verge of solvency. The central banks must create conditions safe enough for firms and banks to operate in the economy. In times of financial distress and crises, the central banks can use various tools to prevent any panic or huge losses to the financial institutions in the state. In this article, we shall discuss the Bagehot theory in complete detail.

Also Read: Understanding the theory of Conspicuous Consumption by Veblen

The theory of Bagehot was first introduced by writer Walter Bagehot in the year 1873 in a very famous book called “Lombard Street”. This book was written almost 150 years, but this theory is still considered relevant in today’s time. His book has set a high bar and has set standards for banks, especially central banks.

The central bank is usually considered a lender of last resort, which means it is the least preferred option by other commercial banks to lend from and they opt for this option when they run out of all other solutions. The theory of Bagehot's dictum states that to prevent any sort of panic, the central banks must lend early and freely to the solvent firms that too without limit, maintaining good collateral and at high-interest rates.

The other factor that must be taken into consideration is that banks have assets higher than their capital, so any loss faced by the bank would cause an even higher loss of equity, and it is not favorable for the central or state bank to cause equity losses to other firms and banks. Therefore, if any asset has an interest rate of 2% the central bank’s high rate should not exceed 1.50% and this will not cause a leveraged loss of capital to the firm or bank.

There are two methods that the central bank suggested to prevent any panic from the commercial banks in case they are at risk of being solvent. The two methods by Bagehot are as follows:-

a) The loans should only be given at a very high-interest rate, this is necessary for teaching firms and commercial banks a lesson for being so timid. This is also important for preventing firms and banks from acquiring loans at early precautionary stages without having to pay a lot for their actions. The banks must exercise all possible solutions to prevent solvency before turning to the central or state bank for help.

b) At these rates these actions must be taken on all good banking securities, the objective is to stay alert. The best way to raise caution is by refusing to grant a loan to someone with good security. Bad businesses or firms are present in a small number in comparison to the good businesses in the economy. Hence, the goal is to prevent businesses that are ‘sound’ and have good securities to offer.

The Bagehot Principles and Crisis

The first thing that must be understood to comprehend the Bagehot theory is the fact that bank runs do not necessarily occur because of insolvency rather they can also cause sound banks to become insolvent. If customers and depositors think that the bank is reliable until then the bank stays profitable. In other cases, if the depositors fear that their respective bank is about to get solvent, they rush to take their money out, this can cause the bank to face heavy losses even if the fears of people were irrational.

The reason behind this is the fact that banking systems follow a lethally fragile model. Most commercial banks fund themselves with liabilities that have short maturity while their assets usually have a long maturity.

Fortunately, in 2008 the Fed took over and acted faster than it did in the year 1930. The fed quickly applied the Bagehot theory to the parts of the financial system that were facing the most trouble. This decision by the Fed proved to be very controversial in the period.

The biggest criticism was that the Fed should not act beyond the natural curve of its treasury, instead, the fed must allow the market participants to set risk premiums on all their assets. However, when a panic occurs amongst firms and banks, the natural market forces can become highly destabilizing. Hence, the fed created a window of unlimited funds for firms that usually did not have any access to unlimited funds by the fed.

Difference between Liquidity and Solvency

There is a very blurred line between the two phenomena i.e the concept of liquidity and solvency. The ultimate solution to the problem of bank running in the 1930s involved the principle proposed by Bagehot and deposit insurance. The dividing factors between monetary and fiscal policies are not always as simple as it seems to be in theory.

To prevent major problems Bagehot suggested that liquidity must be provided at a penalty rate, this is done to discourage banks that do not necessarily require assistance from utilizing cheap funding. Central banks initially applied this aspect of the Bagehot theory but ultimately they were forced to water it down.