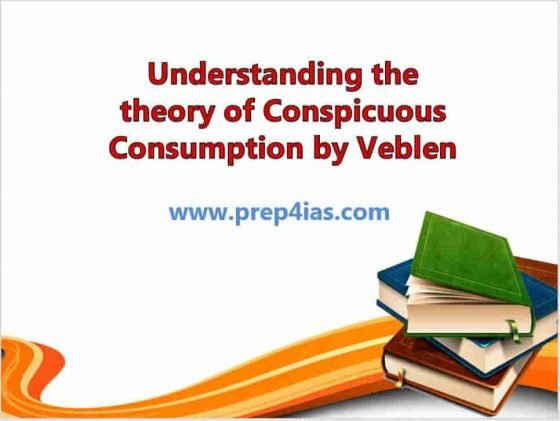 In this article, we shall discuss the topic of conspicuous consumption, a concept proposed by the famous economist Thorstein Veblen. He proposed that many times people spend on certain products to have a better social standing. He backed his theory with many economic and human psychological factors.

What is Conspicuous Consumption

It is human psychology and behaviour that everyone wants to have more luxuries and materialistic things than the rest of their fellows to gain a greater social status and reputation. Conspicuous consumption is an act by the consumers to show wealth and power to showcase their lifestyles.

The theory was studied and introduced by a very famous economist Thorstein Veblen in his famous book “The theory of the leisure class” in the year 1899. In this book, Veblen explained that in the quest to be known as someone wealthy people tend to spend on luxuries things. This human behaviour goes back centuries, even in mediaeval times the concept and craving for being known as “elite” existed. Big houses, fancy vehicles and clothing are usually a sign of someone’s wealth. In today’s time money is considered a sign of power and influence, people with more money have usually more access to a good life and a better social position.

Some economists believe that conspicuous consumption is a consequence of capitalism where each fights to become the best at their careers, in such cases having more luxury goods becomes a sign of success. This theory sheds light on a very large market of luxury goods and how such luxury brands use the human psyche of wanting to look rich and elite for the advantage of their brand. The theory helps the economist in understanding the concept of spending and investing in luxury items and the obsession of societies in today’s time with materialistic things.

Understanding the theory of Conspicuous Consumption by Veblen

There are multiple theories based on the concept of conspicuous consumption, developed by Veblen. He studied this concept for years and tried to figure out the relationship between the materialistic possessions of people and their reputation and status in society. This led to the concept of “luxury goods”. People buy luxury and limited-edition products to stand out from the crowd, they believe that having something that few people have makes them look more influential and richer.

Even though most luxury goods are very impractical and not worth the heavy price tag. For example, many fashion brands sell bags for millions of dollars in the name of exclusive luxury. Such products often have no efficient use or purpose. Veblen termed the use of such products conspicuous waste. Another economist James Duesenberry further explained this concept that people tend to follow trends to maintain their social reputation, and this is called the “bandwagon” effect. There are certain expectations from society that individuals want to keep up with to be respected.

There can be many social and psychological reasons behind the urge for people to spend on goods that make them look rich. Many economists and behavioural experts believe that it is human nature to compete with each other. When a person owns something expensive and exclusive it gives other people an idea that they are successful and have a better lifestyle than them. As most humans are materialistic, limited edition and out-of-range products create an impression on them. Hence, when such competition of owning better products than the rest of the people exists, it increases conspicuous consumption.

According to another theory, it is believed that people are insecure. In today’s time, influencers and celebrities are followed religiously by the masses. People look up to these individuals for inspiration and consider them style icons. Hence, when celebrities carry luxury goods and spend their money on conspicuous goods, it encourages other people to follow them and buy the same products. people consider the goods and products owned by individuals as a sign of success, which makes them insecure if they do not possess the same items and they cannot have access to such products it reminds them of their shortcomings.

Conspicuous consumption also reflects the values and culture of a society. A society where materialistic things and products are given a lot of value and where branded PR luxurious products reflect the economic and social position of an individual will ultimately have more individuals trying to achieve more products which will result in conspicuous consumption. The societies which emphasize the importance of such products are called collectivist cultures. People believe that if they have more exclusive and expensive products they will be respected more in society, which is true in some cases.

One of the most common examples of conspicuous consumption is luxury designer bags and fashion brands. Big fashion houses such as Chanel, Louis Vuitton, Prada etc. sell very ordinary bags and products for 100 times the price tags because of their brand image. Such brands use the psychology of people and claim that their products are exclusive and hard to get so that they can trick people into thinking that having these products will make them stand out among the masses and will elevate their social status.

These brands hire famous and successful brand ambassadors to promote their products to the common people. Even though these bags and shoes do not have any efficient use and are rarely worth the price tag, people still spend millions of dollars on them to impress their peers.

Such brands have a very different client base, they design their products only for the elite class to provide people with the illusion that having more of their products will make them seem more successful and happier in the eyes of others. High-end brands are making millions of dollars every month. To keep up their brand image, these fashion houses often manufacture limited pieces of specific designs to make it difficult for people to acquire them so that when they do finally have these products it feels like an accomplishment.

To conclude, conspicuous consumption can be a result of many social and economic conditions. People spend on luxury products if it is believed within their community that having expensive products reflects wealth and success. It is human psychology to compete with others and to stand out in a crowd, everyone wants to seem rich and better off than others. This leads to such spending; people buy products that are exclusive and expensive to create an impression on their peers.

Such competition can prove to be very harmful to societies and can lead to many irrational spending decisions by consumers. Most luxury products are not even effective or useful in the long run, but people still invest in such products rather than investing in products and services that can provide them with greater returns in the future.