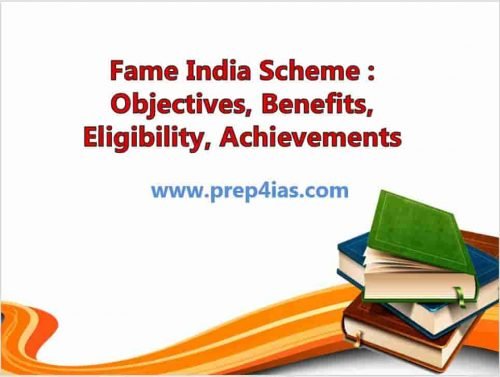 In this article, we will look into another popular scheme called Fame India Scheme. Pollution from automobile emissions has significantly increased in recent years. The Faster Adoption and Manufacturing of (Hybrid &) Electric Vehicles in India (FAME India) Scheme was introduced by the Central Government in 2015 to minimize pollution generated by diesel and gasoline-operated vehicles and to encourage the production of electric and hybrid vehicles.

The National Electric Mobility Mission Plan (NEMMP) 2020 was introduced in 2013 with the goal of achieving national fuel security by encouraging the use of hybrid and electric cars. The Ministry of Heavy Industries introduced the FAME India Scheme in 2015 to encourage the use of electric and hybrid vehicles (xEVs) in India as part of the NEMMP 2020. The FAME India Scheme comprises two stages. which are:-

Phase II: This program's second phase began in April 2019 and will go on until the end of March 2024.

The first phase of FAME India focused on four areas: technological advancement, demand generation, pilot project, and components of the charging infrastructure. The phase had a budgetary outlay of Rs. 895 Cr. and was accessible till March 31, 2019.

The following table summarizes the financial information allocated to and used under Phase I of the FAME India Scheme:-

Phase II of the FAME Scheme was approved with an outlay of Rs. 10,000 crores for a period of five years beginning on April 1, 2019, based on the knowledge gathered during Phase I of the FAME Scheme and suggestions from various stakeholders, including industry organisations.

In June 2021, the FAME India II Scheme underwent a makeover in response to industry and customer feedback as well as experience, particularly during the Covid19 epidemic. The revised plan seeks to hasten the adoption of electric vehicles by reducing their initial costs.

The following amendments have been made to the scheme:-

The sale of electric two-wheelers climbed from 700 per week before the remodel of FAME II in June 2021 to over 5000 per week after the rebuild.

The following is a list of Fame India's main goals:-

The following people are eligible to receive benefits under the Fame India scheme:-

How to Avail Benefits Under Fame India Scheme ?

Applicants must take the actions listed below in order to benefit from Phase II of the Fame India Scheme, which is the most recent phase.

Step 3: Subsequently, a screen with an application form will display.

Step 4: Complete the form with the necessary information and then follow the on-screen directions to finish the process.

Please note that applicants must abide by the guidance provided by the relevant department. They must also keep in mind that there is no alternative way to apply for the Fame India Scheme.

India's EV business is now in a very early stage. However, if the present predicted growth rate is any indication, India will soon rank among the world's top EV markets. This reality is further supported by the government's persistent and devoted efforts over the past few years to promote e-mobility across market segments. These efforts have included a variety of demand and supply incentives as well as targeted EV legislation at the federal and state levels.

The Indian customer base is still reluctant to make the switch to electrified vehicles despite all the factors favoring it. This is mainly because of early adoption barriers like a lack of adequate charging infrastructure, higher capital costs, range anxiety, lengthy charging times, inconsistent electric supply, electricity tariffs, and so on.

The FAME II policy's recent revisions, however, are anticipated to increase demand for 2W and 3W EVs across all consumer categories in India. Initiatives like this would encourage the Indian EV industry to grow and adapt more quickly. There are exciting days ahead for India's electric vehicles. The Fame India Scheme also encourages electricity mobility in a derivative manner.

Following is the need of the hour:-