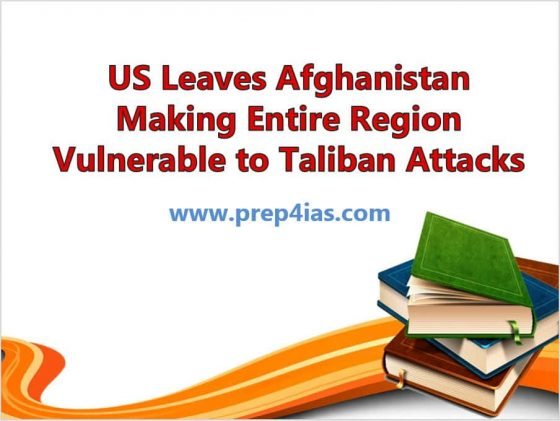 After nearly 20 years of operation in Afghanistan, US finally vacated its last military airbase in Afghanistan that is Bagram Airbase, making entire region vulnerable to Taliban attacks. These comes after US President Joe Biden declared complete withdrawl of US forces from Afghanistan in next few months. Also Read about India-US Relations: Partnership and Agreement on Various Sectors.

After 9/11 attacks by Al Qaeda, US sent its military forces in 2001 to capture or kill the main culprits of the attacks. Just after 2001 attack which killed more than 3000 US people, 1200 US soldiers were quickly on ground within a month and then the number rose to 10,000 soldiers by the end of next year. In the next few years the successive US president increased military count upto 100,000 to ramp up the security in the region and prevent Taliban to carry out any further attacks.

In 2011, US Special forces managed to kill the mastermind of 2003 attacks, Osama Bin Laden. With his death, the primary goal of US military achieved and then by the end of 2014, NATO as well as US has decreased its forces count up to 12500. Now the goal was to handover Afghanistan to its forces marking end of US campaign in the country. Slowly rest of the US troops also began to pull out and now after almost 20 years, US pulled out almost all the troops leaving only handful soldier to protect its embassy and other few important places.

As anticipated Taliban started capturing the Afghanistan cities one after another at a rapid pace and at the time of writing this article, it has surprisingly captured more that 100 districts out of 400 districts in Afghanistan. This has became possible with the US arms and ammunition which they left behind during their withdrawl. There are number of Tanks and military grade trucks which were left behind and has now been used by Taliban to capture and wreak havoc in the cities. Most of the heavy weapons were taken by the US military but the lighter ones were left behind. According to a estimate, almost $3 billion equipment were left behind by the US forces. More on The Hindu article.

Where are Afghan Forces

During the tenure of US forces in Afghanistan, they were given the tasks to provide training to Afghanistan forces and prepare them to protect their own country. But during this entire episode Afghan forces are either found to be running towards Tajikistan Border or surrendering to Taliban to avoid any dreadful outcome of capture. So far Afghan forces remains ineffective towards Taliban aggression but it is yet to see how things move on from here.

Way Ahead for Afghanistan

With the Taliban warning to renew attacks on US and NATO forces if the foreign forces does not withdraw before the given deadline, it is almost uncertain how Afghanistan government and its security forces going to handle this situation. So far Taliban has made clear that it will not participate or involved in any conference or peace talks with anyone until all the foreign troops leave the region. Taliban has conducted intermittent talks with Afghan government with no favorable outcomes till now.

Should India be Worried

India has billions of dollars of Investment in Afghanistan. Last year India had announced 100 projects worth $80 million in Afghanistan. India had also completed other important projects like Afghanistan Parliament building which is a symbol of democracy, India-Afghanistan Friendship dam(also known as Salma Dam) and larger infrastructure projects like construction of a 218-km road between Delaram and Zaranj (on the Iranian border) to provide an alternative connectivity for Afghanistan through Iran. All these Investments are now at major risk.