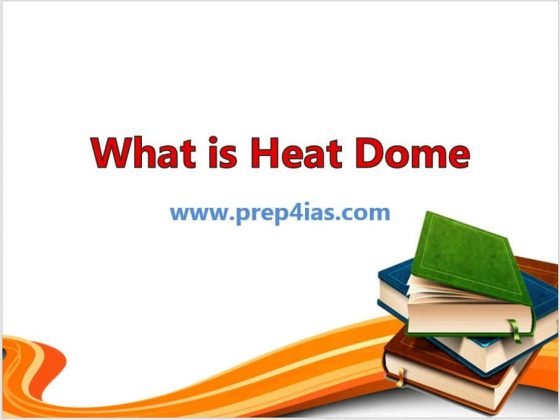 In this article, we will look into what is heat dome and how it created an intense heat wave in US and Canada region. Recently US and Canada has encountered intense heat wave which resulted in the death of more than 63 people in Oregon, US and atleast 486 deaths in British Columbia over the last few days. A team of researcher investigated the entire episode and said this type of event is likely to happen once in a 1000 year.

What is Attribution Study

It is a type of study which is being done to determine the extent of anthropogenic activities leading to extreme weather events like drought, heat wave, flood and hurricanes.

What is Heat Dome

It is basically a high pressure circulation in upper atmosphere which traps the surface air like a lid or cap and hence forming shape like Heat Dome.

Cause of formation of Heat Dome

According to NOAA Scientists, the main cause was a strong change (or gradient) in ocean temperatures from west to east in the tropical Pacific Ocean during the preceding winter. Over the last few years, increase in Anthropogenic activities severely impacted the planet climatic conditions causing an increase in greenhouse gases. More on NOAA official page.

Intense Heat Wave in US and Canada

Recently, British Columbia in Canada has witnessed record breaking temperature of 49°C beating the previous national high of 45°C. Similarly, in the US states of Oregon, Washington and in other major cities, temperature soared above 40°C causing sudden spikes in death and hospital visit.

What Does Data Say

According to the data collected by the researchers of World Weather Attribution from 21 different climate models to estimate how much climate change influenced the heat experienced in the area around the cities of Seattle, Portland and Vancouver, it has been concluded that a one-in-1000-year event would have been at least 150 times rarer in the past. The comparison done with the climate we have today with the world as it would be without human induced warming.

Effect of a Heat Dome

To understand the effect of a heat dome, NOAA compared it to a swimming pool with a heater turned on. Temperatures rise quickly in the areas surrounding the heater, while the rest of the pool takes longer to warm up.

Similarly, Western Pacific’s temperatures have risen over the past few decades as compared to that of the Eastern Pacific, creating major pressure differences that drive winds across the entire ocean. The pressure change leads to warm air, heated by the ocean surface, rise over the western Pacific, and decreases convection over the central and eastern Pacific.

How About in Future

According to scientists from Earth System Science Center, heatwaves now occur three times as often as they did in the 1960s and record-breaking hot months are occurring five times more often than they would be expected without global warming. Over the time, heat waves have becomes larger and larger, affecting 25% of more land area in Northern Hemisphere than they did in 1980.

According to experts, the number of heatwaves is only likely to rise in the Pacific Northwest, a region normally known for cool, rainy weather, with a few hot, sunny days mixed in, and where many people don’t have air conditioning.