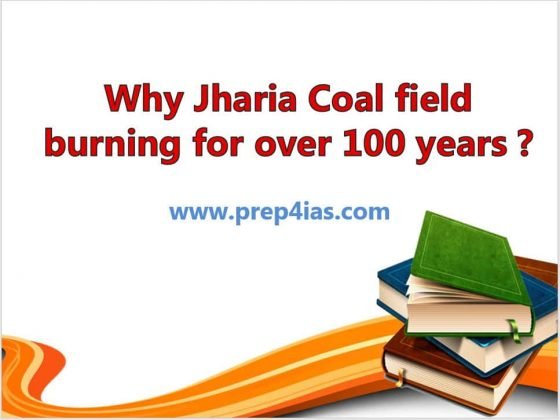 In this article, we will look into Jharia Coalfield coal which has been burning for over 100 years. Jharia Coalfield estimated to have the India's largest coal reserve which stands around 19.4 billion tonnes of coking coal. It has spreaded around 450 square kilometers with nearly 5 Lakh lives depending on the region. It remains an active source of Coking coal but due to current conditions it is almost impossible to perform any mining operations here.

Jharia coalfield is located in the eastern region of India in Jharia, Jharkhand. This coal field is known to be the source of highest quality of Coal. Mining in this coal field was started in 1894 and it further intensified in 1925. Jharia coal field consists of 23 large underground mines and 9 large open cast mines.

Why Jharia Coal field burning for over 100 Years ?

The continuous burning of Jharia Coal field poses a great question to our technological advancement about dealing with the underground coal bed burning problem. According to BCCL estimates, the fire have already engulfed around 37 million tonnes of Coal causing huge loss to country's economy. Over the years, this problem has devastated the life of peoples living around that region.

Cause of the Fire

The first fire reported from Jharia Coal mine was way back in 1916. While the cause of fire was not very clear but it is widely believed that unscientific mining in the past led to this fire. There are still atleast 70 active regions detected in Coal mine where burning of coal is still going on. After this incident, authorities tried to extinguish the fire but all efforts went in vain.

According to some reports, there are wide cracks beneath the surface which continuously supplying the oxygen required for burning to continue and there is every possibility that it might continue for next thousand of years depending on the availability of coal and oxygen in that area.

Do we need to Worry

Jharia Coalfield and regions surrounding it are known to be sitting on Ticking time bomb or sometimes said sitting over sleeping volcano which might erupt any time. The current situation in this area is not just worrisome but alarming. Over the years we always hear the report of Land subsidence and abrupt fire in the region making people vulnerable to some major accident in that area.

Impact on People and Environment

Both the life of the people and environment are adversely impacted due to this century long burning. Pollution created by this burning of coal are affecting both Air and Water hence causing air and water pollution. Smoke from this fire contains oxides of Carbon, Sulphur and Nitrogen which along with the mixing of other particulate matter causes Lung and Skin diseases, sometimes even causing Lung and Skin Cancer. More on PIB.

Along with the unwarranted emission of Carbon dioxide gases contributing to the Global Warming, the harmful gases also causing Chronic bronchitis and Asthma to young children and adults. The running streams of water in that area carries the particulate matter to the underground water, ponds and lakes making the water polluted. Not only air and water but it also degraded the large part of land making it unsuitable for any vegetation to grow.

To deal with this dreaded situation, first and foremost thing to do is to resettle all the local population to another safe region. While the government has initiated some steps to tackle this situation but till now nothing much has done in this regard. Initially authorities gained some success in relocating people but not all of them ready to leave this place which hence forth created new challenges for the government.

This matter was also taken in the court and is currently in pending since 1997. There were some hearings held in 2009 where court facilitated the relocation of families to another safe region. On the other hand, both ECL and BCCL are trying to douse the fires. They have gained some success in some of the areas but at large there are lot of work still needs to be done.