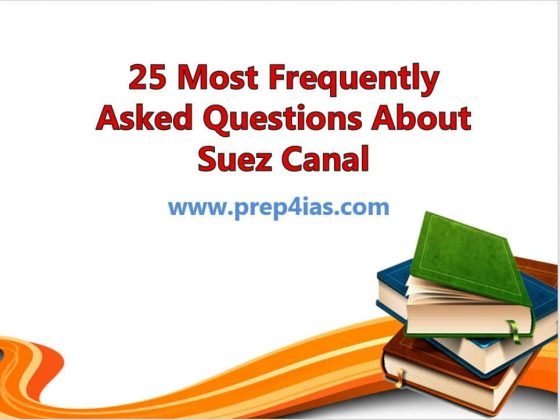 In this article, I will take you through 25 Most Frequently Asked questions about Suez Canal. According to a report, around 12% of the world trade passes through the canal every year. Thus making the canal utmost important for the world trade. Earlier without the canal, all the ships had to transit through Africa's Cape of Good Hope which added the extra cost of travelling 6000 miles and hence increase in good's and transport price. Now with the construction of canal all these prices has been come down significantly. We will see some of the important questions related to this canal in below section.

Ans. It is an artificial sea-level waterway in Egypt which connects Mediterranean with the Red Sea through Isthmus of Suez to provide ship transit between Asia and Africa.

2. Where is the Suez Canal located ?

Ans. It is located in Egypt.

Ans. Canal is owned and operated by the Suez Canal Authority.

7. When was the Suez Canal built ?

Ans. In 1854, Ferdinand de Lesseps received an Act of Concession from the viceroy (khedive) of Egypt to built the Canal.

9. How did the Ever Given ship got stuck in the Suez Canal ?

Ans. Ever Given was travelling through the Suez Canal, when it was caught in a sandstorm. The strong winds, which exceeded 40 kn (74 km/h 46 mph), resulted in the "loss of the ability to steer the ship", causing the hull to deviate. More on wikipedia.

Ans. No, it doesn't have any locks.

11. Why is the Suez Canal Important ?

Ans. The Suez canal is a significant route for energy, commodities, consumer goods and component from Asia and the Middle East to Europe. The canal's location also makes it a key regional hub for shipping oil and other hydrocarbons.

Ans. It was built to create a short and direct route for shipping between Asia and Europe.

13. What does the Suez Canal connect ?

Ans. The Suez Canal connects the Mediterranean Sea to the Red Sea.

17. How long did it take to build the Suez Canal ?

Ans. It took around little more than 10 years to construct the Canal.

19. Which Ship got Stuck in the Suez Canal ?

20. Why did Britain took control of the Suez Canal ?

Ans. It was under French Control.

22. Which ship was the first to pass through the Canal ?

Ans. An anchor line ship, the S.S Dido became the first to pass through the canal from south to north.

23. When was Suez Canal nationalized by the Egyptian President ?

24. Which Convention guaranteed the right of passage of all ships through the canal during war and peace ?

25. As of now, how many ships can pass through the canal in a day ?

Ans. After almost doubling the capacity now 97 ships can pass through the canal in a day.