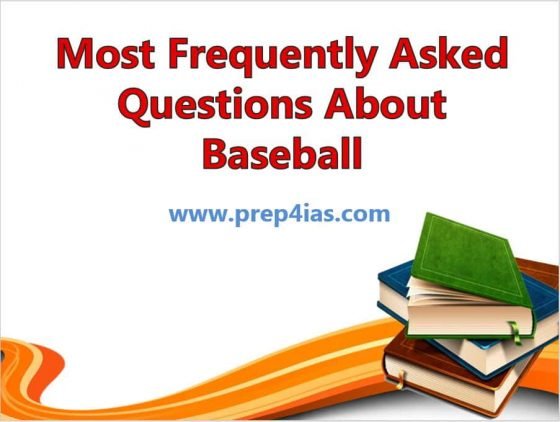 In this article, I will take you through 30 Most Frequently Asked Questions About Baseball but before that let me ask you a question. Do you know what is the national sport of United States of America ? If your answer is Baseball then you are absolutely correct. Baseball is a very popular sport in USA and in many other countries around the World. We will see some of the most frequently asked questions about this game in below section. More about Baseball.

Most Frequently Asked Questions About Baseball

Also Read: 30 Most Important Questions and Answers About Basketball

Ans. Baseball is a bat-and-ball game played between two opposing teams, typically of nine players each, that take turns batting and fielding.

2. How many Innings in Baseball ?

4. What does Ops mean in Baseball ?

Ans. Ops is also known as On-base plus slugging. It is a sabermetric baseball statistic calculated as the sum of a player’s on-base percentage and slugging percentage.

Ans. A fielder is credited with a putout when he is the fielder who physically records the act of completing an out whether it be by stepping on the base for a forceout, tagging a runner, catching a batted ball, or catching a third strike.

7. What is a grand slam in Baseball ?

Ans. A grand slam is a home run hit with all three bases occupied by baserunners, thereby scoring four runs – the most possible in one play.

8. When was Baseball invented ?

9. How much does a baseball weigh ?

Ans. The weight of the baseball will be between 5 and 5.25 ounces.

11. What does whip mean in Baseball ?

Ans. WHIP is also known as Walks And Hits Per Inning Pitched. It is a sabermetric measurement of the number of baserunners a pitcher has allowed per inning pitched.

Ans. A walk-off occurs when the home team takes the lead in the bottom of the ninth or extra innings.

Ans. Seven to 10 dozen balls are used in an average game.

14. How many Stitches on a Baseball ?

Ans. There are 108 stitches in the cowhide leather of each ball, and each is done by hand.

Ans. ERA or Earned run average represents the number of earned runs a pitcher allows per nine innings – with earned runs being any runs that scored without the aid of an error or a passed ball.

18. What is hitting for the cycle in Baseball ?

Ans. Hitting for the cycle is the accomplishment of one batter hitting a single, a double, a triple, and a home run in the same game.

19. Where was Baseball invented ?

Ans. It was invented in Cooperstown, New York

Ans. War is also known as Wins Above Replacement. It is a metric used to try to see a players overall contribution to the team.

Ans. An error is an act, in the judgment of the official scorer, of a fielder misplaying a ball in a manner that allows a batter or baserunner to advance one or more bases or allows a plate appearance to continue after the batter should have been put out.

Ans. Commonly, Baseball are made of three components:-

Ans. A hold occurs when a relief pitcher enters the game in a save situation and maintains his team’s lead for the next relief pitcher, while recording at least one out. One of two conditions must be met for a pitcher to record a hold:-

Ans. A save in a Baseball is credited to a pitcher who finishes a game for the winning team under certain prescribed circumstances.

26. What is Slugging percentage in Baseball ?

Ans. Slugging percentage (SLG) is a measure of the batting productivity of a hitter.

27. What is the triple crown in Baseball ?

Ans. A player earns a Triple Crown when he leads a league in three specific statistical categories in the same season.

Ans. Baseball bats most commonly are found between 24-34 inches.

29. How many players on a Baseball field ?

Ans. A team can have a maximum of 9 players at any one time on the field.

Ans. RBI is also known as Runs Bitted In. It is a statistic in baseball that credits a batter for making a play that allows a run to be scored (except in certain situations such as when an error is made on the play).