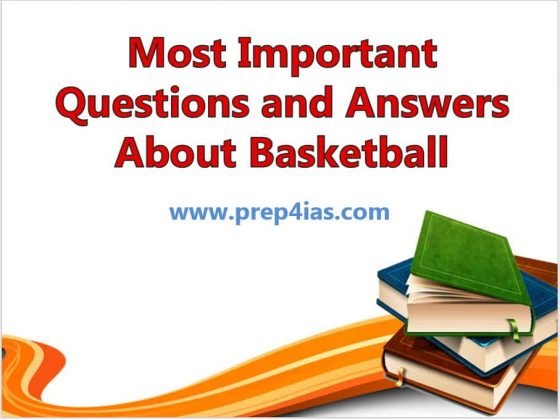 In this article, I will take you through 30 Most Important Questions and Answers about Basketball but before that let me ask you a quick question. Do you know what is the National Sport of Lithuania ? If your answer is Basketball then you are absolutely correct. There are many countries where Basketball is a popular sport and it is also a part of Olympic Sport. Here we will see some of the important questions and answers related to this popular sport in below section.

Most Important Questions and Answers About Basketball

Also Read: 58 Important Countries and their National Games in the World

Ans. Basketball is a sport played between two teams, opposing one another on a rectangular court, compete with the primary objective of shooting a basketball through the defender's hoop while preventing the opposing team from shooting through their own hoop. More about Basketball.

2. What is a triple threat position in Basketball ?

Ans. A triple-threat basketball position is a posture where a player can do one of three things: dribble the ball, pass the ball, or shoot the ball.

3. When was Basketball invented ?

4. How long is a Basketball game ?

Ans. Game runs an average of around 2 1/2 hours, unless they go into overtime.

5. How many players on a Basketball Team ?

6. How long is a Basketball court ?

7. Where was Basketball invented ?

Ans. It was invented in Springfield College.

8. How many quarters in Basketball ?

9. How tall is a Basketball hoop ?

10. What is the Standard size of the Basketball ?

Ans. Size 7 basketballs are the standard ball size for most of the professional games.

11. How long is a quarter in Basketball ?

Ans. Every quarter of the game lasts 12 minutes each.

Ans. Carrying is a violation in the game of basketball. It occurs when the dribbling player continues to dribble after allowing the ball to come to rest in one or both hands.

Ans. A charge is an offensive foul. When a charge is called, it means that an offensive player has made significant contact with a defender that has an established position.

14. How much does a Basketball weigh ?

Ans. The standard weight of Basketball should be 22 oz.

16. How many steps can you take in Basketball ?

Ans. General rule of thumb is that you can take two steps without dribbling.

17. What does bonus mean in Basketball ?

Ans. In the sport of basketball, the bonus situation (also called the penalty situation) occurs when one team accumulates a requisite number of fouls, which number varies depending on the level of play.

19. How many players on a Basketball court ?

Ans. There should be 5 players on the court at one time.

Ans. A block or blocked shot occurs when a defensive player legally deflects a field goal attempt from an offensive player to prevent a score.

21. What is a triple double in Basketball ?

Ans. When a player reaches a score of ten or more in at least three of these statistical categories in a game, he records a triple double (e.g. 10 points, 10 assists, 10 rebounds).

23. Who is known as the greatest basketball player of all the time ?

24. Which are the founding nations of FIBA (Fédération internationale de basketball amateur) ?

26. When was the Basketball first became an official Olympics event ?

Ans. It was during the 1936 Berlin Summer Olympics.

27. What is the official Basketball size for women's ?

28. Who is the first international player to be inducted in the Basketball Hall of Fame in 1992 ?

29. Which country won the maximum number of Gold medals in Olympic men's Basketball ?

30. When did Basketball become an Olympic Sport ?

4 thoughts on “30 Most Important Questions and Answers About Basketball”