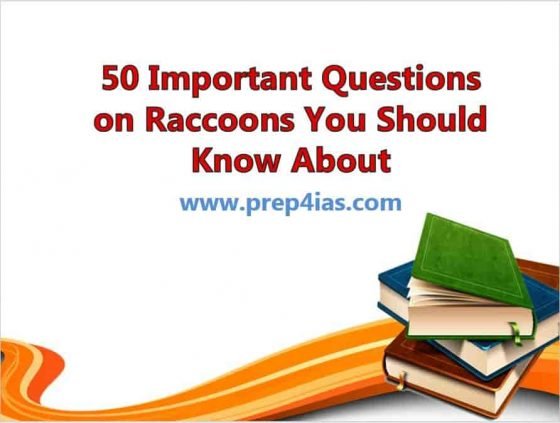 In this article, we will see 50 Important Questions on Raccoons that you should definitely know about. Raccoon plays a very important role on land as well as on aquatic food chain in the ecosystem. They help control populations of prey like rodents and act as prey for predators like coyotes in addition to spreading seeds and plants. Raccoons are known for their adaptability to various conditions. Previously they were native to deciduous and mixed forests but later due to their adaptability they extended their habitat to mountainous area, coastal marshes and even in urban areas. They are also known for their intelligence. We will see some important questions about this mammal in below section.

50 Important Questions on Raccoons You Should Know About

Also Read: 50 Important Questions on Elephants You Should Know About

Ans. A Raccoon is a mammal from procyonid family, having a body length of 40 to 70 cm, and a body weight of 5 to 26 kg native to North America.

2. Are Raccoons dangerous to humans ?

Ans. Yes, Raccoons can pose great health risk to humans as they might carry rabies, which is a life threatening disease for humans.

Ans. Raccoons are not true hibernators. They usually remain active throughout the year.

4. Where do Raccoons live ?

Ans. Raccoons can be found in wild as well as in Captivity. They live in all kind of places.

Ans. No, raccoons are not rodents. They are actually more closely related to bears, wolves, and cats in the order of Carnivora.

6. How long do Raccoons live ?

Ans. Raccoons live an average of 2-5 years in the wild, with captive raccoons living much longer.

8. Where do Raccoons sleep ?

Ans. In urban or city areas, raccoons sleep in abandoned cars, dumpsters, and sewer drains, but hide in attics, garages, and underneath decks in suburban areas. In the wilderness, they sleep in tree hollows, under rocks, and vacant animal dens.

9. What is a group of Raccoons called ?

Ans. A group of raccoons is called a nursery or a gaze.

Ans. According to few studies, raccoons make more than 200 sounds, and each sound indicates a different function or activity.

11. Where do Raccoons live during the day ?

Ans. During the day, raccoons find shelter in all environments.

Ans. The average length of an adult raccoon can reach up to 28 inches. They typically weigh anywhere from 5 to 35 pounds.

Ans. Raccoons are known as true omnivores who eat a wide variety of foods, including nuts, seeds, fruits, eggs, insects, frogs, and crayfish. They will eat whatever is available, using their dexterous paws to pluck morsels from small hiding places.

Ans. Raccoons can swim very well, which allows them to stay in the water for several hours. They swim at an average speed of 3 miles per hour.

Ans. Raccoons are very adept climbers and have many reasons for climbing trees. One of the primary reason is to escape from the predators.

Ans. Raccoons are known as the smartest animals as they are great problem solver.

Ans. The fur of a raccoon is typically black, brown, or gray. However, there are some raccoons that have red, blonde, or white fur.

20. What color are Raccoons eyes ?

Ans. They can be found in many kinds of habitats, from warm tropical areas to cold grasslands. Raccoons prefer to live in moist woodland areas. However, they can also be found in farmlands, suburban, and urban areas.

Ans. On average, most raccoons can jump as far as 10 feet away but there is a consensus that raccoons can easily handle jumps from as high as 40 feet in the air.

24. How long can a raccoon live with rabies ?

Ans. A rabid raccoon is usually dead within 1-3 days of becoming infectious, and even if you're bitten by a rabid raccoon, effective post-exposure treatment is available.

26. How much do Raccoons weigh at birth ?

Ans. When a baby raccoon is born they weigh anywhere from 2 to 7 ounces.

27. How many fingers do Raccoons have ?

28. What do Raccoons eat in the spring and early summer ?

Ans. During spring and early summer, they feast on insects, aquatic animals, mice and other small mammals, birds and turtles.

29. What do Raccoons eat in the late summer, fall, and winter ?

30. How long do Raccoons live in Captivity ?

Ans. A raccoon can live up to 20 years in Captivity.

Ans. It has five toes in front paws.

Ans. The bite force quotient (BFQ) of a raccoon is roughly 100.

33. Are Raccoons dangerous to dogs and cats ?

Ans. Raccoons are known for inflicting pain to dogs and cats in the night.

Ans. Raccoons lacks thumbs due to which they can't grasp objects with one hand and hence has to use both forepaws together to lift and then acutely manipulate objects.

Ans. In the wild, raccoons eat birds and other mammals, but they prefer to hunt for easier meals if they are available.

36. Why do Raccoons wash their food ?

Ans. Raccoons wet their food to gather more sensory information, and moistening the food helps raccoons further understand what they are eating.

37. Which is the largest raccoon species in the world ?

Ans. Procyon lotor is the largest raccoon species in the World.

38. Which is the smallest raccoon species in the world ?

Ans. The smallest species of raccoon is the Cozumel or pygmy raccoon Procyonpygmaeus.

39. What is the ecological importance of raccoon ?

Ans. Raccoon plays an important role in controlling the population of rodents and also serve as a prey for predators like coyotes, thus maintaining the ecological balance of the habitat they lives in.

40. How many pygmy raccoon are left in the world ?

Ans. The pygmy raccoon may have fewer than 250 mature individuals left in the wild, and the IUCN estimates that the total population size, including juveniles, is only 323 to 955.

41. How long have raccoons been around ?

Ans. Based on fossil evidence from Russia and Bulgaria, the first known members of the family Procyonidae lived in Europe in the late Oligocene about 25 million years ago.

Ans. Most females begin reproducing around the age of 1 yr.

43. What is the gestation period of female Raccoon ?

Ans. The average gestation period of female raccoon is 63 days.

44. What does baby raccoons are called ?

45. What is the usual mating season of Raccoons ?

Ans. Raccoons mate in late winter so they usually give birth in April and May.

46. What are the different types of Raccoons in the World ?

Ans. There are three main species of Raccoons in the world:-

47. What is the favorite food of Tropical Raccoons ?

Ans. Tropical Raccoon likes to eat a lot of Crabs.

48. Where does Pygmy Raccoons can be found ?

Ans. Pygmy raccoons can only be found in Cozumel Island in Mexico.

Ans. Raccoons are not very good in distinguishing colors. They are found to be sensitive to green color.

50. Is there any significance of Raccoons dark faces ?

Ans. According to a study published in Biological Journal, the dark patterns of Raccoons are most likely the anti-glare devices.