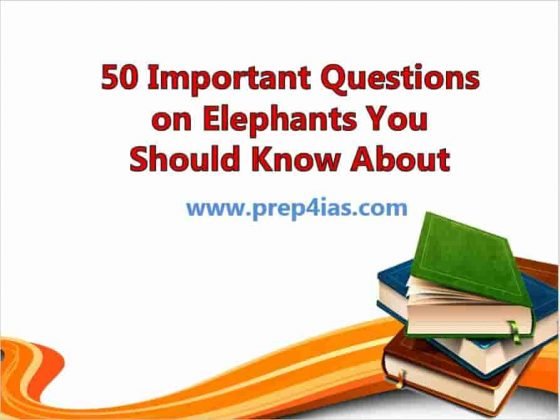 In this article, I will take you through 50 Important Questions on Elephants that you should definitely know about. Elephant is the largest living land mammal on earth and a integrated part of biodiversity. It helps maintain the savanna ecosystems and forest for other species. Elephants are known for making pathways for other species in a dense forests. Even their footprint creates a smaller ecosystem, when filled with water for tadpoles and other smaller organisms. Hence elephants survival is the key to maintain a healthy ecosystems. Here we will see some of the more important questions on elephants in below section.

50 Important Questions on Elephants You Should Know About

Also Read: 50 Important Questions on Penguins You Should Know About

1. How much does an Elephant weigh ?

Ans. Elephants are big vegetarians. In the wild, they eat a wide variety of plants, from savannah grasses, shrubs, and herbs, to woody trees, bark, and fruits. Their diet depends on what's available in their habitat in a given season.

3. How long do Elephants live ?

Ans. The average life span of an Asian elephant is 48 years, while the African elephant lives 60-70 years.

4. How many Elephants are left in the world ?

Ans. According to the latest data, there are less than 500,000 elephants left in the World.

5. Where do Elephants live ?

Ans. Elephants are only native to Africa and Asia.

7. Do female Elephants have tusks ?

Ans. Yes, both male and female elephants have tusk.

8. What is a baby elephant called ?

Ans. A baby elephant is called a calf.

9. What is a group of Elephants called ?

Ans. A group of elephants is commonly called a herd or, less commonly, a parade. A herd is made of all the mother elephants and their babies. There might be six to 12 members in a family.

Ans. Ivory tusks are actually massive teeth that protrude well beyond the mouths of elephants. Like our own teeth and those of many mammals these tusks are deeply rooted.

13. What color are Elephants ?

Ans. Elephants are grayish to brown in color, and their body hair is sparse and coarse.

Ans. Elephants are exceptionally smart creatures. They have the largest brain of any land animal, and three times as many neurons as humans.

Ans. Both male and female African elephants have tusks, while only male Asian elephants, and only a certain percentage of males today, have tusks. More on World Wildlife.

Ans. They lean against a tree or large mound or simply rest their trunk on the ground and sleep.

Ans. The average life span of an Asian elephant is 48 years, while the African elephant lives 60-70 years.

18. What sound does an Elephant make ?

Ans. Elephants make a sound, known as a trumpet, to signal excitement, aggression and distress.

Ans. The elephant brain, in particular, at 4.5–5 kg, is about 3-4 times larger than the human brain.

Ans. Elephants may stroke each other with their trunks before the male mounts the female from behind, standing almost vertically as they mate. Elephant sex lasts for up to two minutes and afterward, he will stay near the female and guard her from other males.

22. How much does a newborn Elephant weigh ?

23. What do Elephants eat in summer ?

Ans. In the summer, when the weather turns dry and the grass dies, elephants will eat any kind of vegetation that they can find. They even eat the toughest bark and the woody parts of plants.

24. Do Elephants have predators ?

Ans. Because of their tremendous size there are very few elephant predators out there. Lions, hyenas, and crocodiles may attempt to prey on young or sick elephants.

25. How many species of Elephants are there ?

26. What are Elephant tusks made of ?

Ans. Elephant tusk is made up of dentine, a hard, dense, bony tissue and the whole tusk is wrapped in enamel which is also known as the hardest animal tissue.

Ans. The four most common eye colors that elephants have are dark brown, light brown, honey and gray.

28. What is a female elephant called ?

Ans. Elephants tusks are actually elongated incisors which has developed over the time, giving the species an evolutionary advantages.

32. How do elephants communicate ?

Ans. Elephants communicate with each other in various ways, including touching, visual displays, vocalisations, and seismic vibrations. More on wikipedia.

33. What do Elephants eat in winter ?

Ans. During winter, elephants consume an increasing amount of leaves and twigs from woody plants, followed by bark and roots as leaves are shed.

34. Are Elephants afraid of mice ?

Ans. There is a popular myth that elephants are afraid of mice but as of now, there is no evidence found to back this claim.

35. How long is Elephant pregnancy period ?

Ans. For Asian elephants, it could be somewhere between 18 to 22 months and for African elephants it is 22 months.

37. How many stomachs does an Elephant have ?

Ans. Elephants have just one stomach. However, it has multiple stomach chambers. This is because the elephant’s food is very fibrous and hard to digest. It is easier for the animal to break it down into separate compartments.

38. How much time does it take for an Elephant to complete the digestion process ?

Ans. The digestion process usually takes 36 to 48 hours in an elephant's stomach to complete.

39. What biome does elephants live in ?

Ans. They are found most often in savannas, grasslands, and forests but occupy a wide range of habitats, including deserts, swamps, and highlands in tropical and subtropical regions of Africa and Asia.

Ans. Elephants are very strong animals that can lift about 770 pounds with their trunks alone. They can also carry over 2,100 pounds (1 ton) on their backs – about 21 times the human lift force.

Ans. Elephants have an impressive bite force of over 2,175 PSI.

Ans. An adult elephant can consume up to 300 pounds of food in a single day.

43. How many teeth do Elephants have ?

Ans. Both African and Asian elephants have a total of 26 teeth including two upper incisors (tusks), 12 premolars (non-permanent teeth similar to baby teeth), and 12 molars.

44. How many Asian Elephants are left in the wild ?

Ans. There are less than 50,000 Asian elephants left in the World.

45. What do Elephants use their tusks for ?

Ans. The elephant tusks are used for variety of purposes including digging, lifting objects, gathering food, stripping bark from trees to eat, and defense. Along with this tusks along protects the trunk.

46. How many African Elephants are left in the world ?

Ans. As of today, there are just 415,000 African elephants left in the world.

Ans. An elephant heart can weigh anything from 12 to 28 kgs but amounts to only about 0.5% of the animal's body weight.

48. How long have Elephants been around ?

49. Which is the largest living land animal ?

50. How many toes does an Elephant have ?

Ans. The animal's real thumb looks just the rest of its fingers, and together they form a paw with five claws.