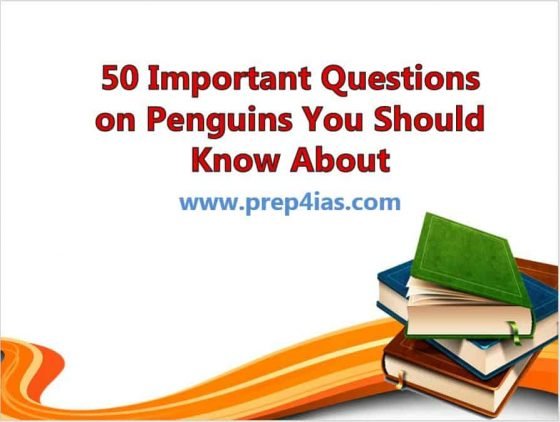 In this article, I will take you through 50 Important Questions on Penguins that you should definitely known about. Penguins are group of aquatic flightless birds which exclusively lives in the Southern Hemispherical region of the planet. Only one species, the Galápagos penguin, is found north of the Equator. They are one unique bird species with lot of unique features. They are known for their long and tiring migrations from one place to another for breeding. They spend roughly half of their lives on land and the other half in the sea. We will see some of the most frequently asked questions about this wonderful creature in below section.

50 Important Questions on Penguins You Should Know About

Also Read: 50 Important Questions on Lions You Should Know About

Ans. Penguins are a group of aquatic flightless birds that lives almost exclusively in the Southern Hemisphere at very low temperature region.

2. Where are Penguins found ?

Ans. Penguins are found in almost all the continental region of the Southern Hemisphere. Some island-dwellers can be found in warmer climates, but most - including emperor, adélie, chinstrap, and gentoo penguins - reside in and around icy Antarctica.

Ans. Penguins are flightless seabirds that lives almost exclusively below the equator.

6. Where do Penguins live ?

7. Do Penguins have teeth ?

Ans. No, they don't have any teeth.

8. What is a group of Penguins called ?

9. How are penguins being affected by climate change in Arctic ?

Ans. The rapid increase in global warming has shrinking the ice with much faster pace causing loss in habitat. The loss of sea ice is harming Emperor penguin chicks and adults. If this rate continues, it won't take much longer for penguins to become critically endangered species. Read more on Biological Diversity official website.

Ans. The average life expectancy of penguins is somewhere between 15 to 20 years in the wild. But depending on the species, some of them lives longer.

11. How tall are emperor penguins ?

Ans. No, as of now Penguins are not endangered in Antarctica but a rapid climate change can reverse this fact very soon.

Ans. The sound of individual penguins can be different from others. They may make sounds like crackling, sputtering, snapping, roaring blaze, popping and sizzling.

Ans. The female will lie down on the ground and the male will climb on her back and walk backward until he gets to her tail. The female will then lift her tail, allowing the penguins' cloaca (reproductive and waste orifice) to align and sperm to be transferred.

Ans. There are around 30 million penguins left which are split across 18 different species.

16. How many species of penguins are there ?

Ans. Penguins are a family of 17 to 19 species of birds that live primarily in the Southern Hemisphere.

Ans. Yes, penguins do have knees. A penguin's leg is composed of a short femur, knee, tibia and fibula.

18. How long can Penguins hold their breath ?

19. Do Penguins have feathers ?

Ans. Penguins have more feathers than most other birds, with about 100 feathers per square inch.

Ans. Like other birds, Penguin also need to breathe oxygen from air. They cannot breathe underwater.

22. Where do Penguins live in Australia ?

Ans. In Australia, little penguin colonies are scattered around the coastline from near Perth on the west coast, to Sydney on the east coast, and around Tasmania.

23. Are there penguins in the north pole ?

Ans. Penguins only live in the southern hemisphere, so there are no penguins anywhere near the north pole except the Galápagos penguin which lives in the north of the equator.

Ans. They do have ears that are located on each side of their head. Like other birds, penguin ears lack external ear flaps . The ears reside on either side of the head as holes covered by feathers.

Ans. Penguins don't have fur. They have feathers just like other birds.

Ans. The emperor penguin (Aptenodytes forsteri) is the tallest and heaviest of all living penguin species and is endemic to Antarctica.

27. Which is the tallest of all the Penguin species ?

Ans. Emperor Penguins are the tallest of all the Penguin species.

28. Which is the heaviest of all the Penguin species ?

Ans. Emperor Penguins are the heaviest of all the Penguin species.

Ans. Adults weigh between 2.2 to 3.3 pounds, with males being slightly heavier than females.

31. How much deep under water a penguin can go upto ?

32. How fast can Penguins swim under water ?

Ans. Most penguins swim underwater at around four to seven miles per hour (mph).

33. Which penguin swims the fastest ?

Ans. The Gentoo (Pygoscelis papua) is the fastest of all the penguins.

34. Which day of the year is celebrated as World Penguin Day ?

Ans. April 25th of each year is celebrated as World Penguin Day.

35. Where do penguins live in South Africa ?

Ans. It lives from Hollams Bird Island, near the central Namibian coast, to Algoa Bay off the coast of the Eastern Cape, South Africa.

Ans. Penguins are excellent navigators which proves that they are smart and intelligent as they can sense the direction and remember the way.

Ans. A penguins' fat layer is what protects them against the cold while in the sea. On the land however their feathers fulfill the function of keeping them warm.

38. What does an emperor penguin eat ?

Ans. Emperors feed mostly on Antarctic silverfish as well as other species of fish, krill (like Will & Bill from Happy Feet) and some squid.

Ans. An adult Penguin eats about 2-3 kg per day.

40. What animals eat Penguins in water ?

Ans. When in the water, penguins may be eaten by leopard seals, fur seals, sea lions, sharks, or killer whales.

Ans. Penguins have unusual sleeping patterns. Instead of sleeping for many hours at night, they take short naps during the day and evening. They have the unique ability to sleep while standing up or in the water. Sometimes they sleep with their bills tucked under their wings.

Ans. A penguin's tail is short, and wedge-shaped, with 14 to 18 stiff tail feathers.

Ans. Yes, after mating the female emperor or king penguin will lay a single egg.

Ans. No, they all are warm blooded animals.

45. Do polar bears and penguins live together ?

Ans. No, they don't live together in the same region. Even though they both live in same kind of habitat, polar bears are always found in Artic in the Northern Hemisphere and Penguins are found near Antarctica in the Southern Hemisphere.

Ans. Penguins are white on their ventral (belly) and black on their dorsal (back).

Ans. No, penguins do not hibernate or reach any state of dormancy. Instead they are so much hard working that they undertake long and extremely difficult migrations to reach the place to breed.

49. How do penguins know which baby is theirs ?

Ans. Parent identify their chicks through a distinctive call. This is an adaptive feature penguins have.

Ans. Yes, they can jump over 9 feet (or up to 3 meters), depending on their species.