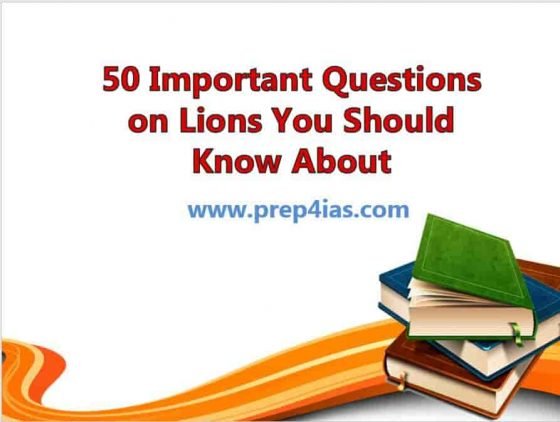 In this article, we will see 50 Important Questions on Lions that you should definitely know about. Lion is famously known as the king of the Jungle because of their ability to dominate the habitat they lives in. While in reality Hyenas and wild dogs do eat Lion cubs but still it is known as the apex predator. Because of this very reason Lion is also used as a symbol in many places to represent the courage, nobility, royalty, strength, stateliness and valor. Once Lion existed in a huge number but unfortunately in last few decades their number declined at very rapid rate. We will see some important questions on Lions in below section.

50 Important Questions on Lions You Should Know About

Also Read: 50 Important Questions on Porcupines You Should Know About

Ans. Lions are carnivores, which means they are animals that only eat meat.

Ans. Lions inhabit a wide range of habitats, from open plains to thick brush and dry thorn forest. Except for a small population of the Indian lion subspecies that remains in the Gir Forest of northwest India, lions now live only in Africa, from the Sahara's southern fringe to northern South Africa.

Ans. Lions are currently listed as “vulnerable” on the International Union for the Conservation of Nature (IUCN) Red List of Threatened Species.

7. How many Lions are left in the world ?

Ans. There are currently only about 23,000 lions left in the wild.

8. What do mountain Lions eat ?

Ans. Typically they prey on deer, but also feed on smaller animals, even insects, when necessary.

Ans. A mountain lion is anywhere from 2 to 3 feet tall.

Ans. Lions are strong and fast predators, can easily reach speed up to 80 km/h (50 mph) in short period of time.

Ans. Scientists believe that lions everywhere can climb up into branches.

Ans. The mountain lion has been listed as “Least Concern” by the International Union for Conservation of Nature (IUCN).

Ans. Male lions will use their roar to scare off intruders and warn the pride of potential danger. It's also a show of power among other males.

Ans. Lions are considered nocturnal or crepuscular animals as they are active primarily at night or during the very early or very late hours of the day.

Ans. They can go without water for a maximum of 4 days.

Ans. Their body coats are yellow-gold, and adult males have shaggy manes that range in color from blond to reddish-brown to black.

Ans. The mane has often been viewed as a shield that protects a male's neck during fights against other males, but lions mostly attack each other on the back and hips. Instead, the size and coloration of the mane serves as a signal to other lions about the male's fitness, similar to the showiness of the peacock's tail.

19. Are lions bigger than tigers ?

Ans. Lions cannot swim underwater, and they can only swim in water bodies until three feet deep.

Ans. Certainly, Lions are known as the most intelligent species of all the big cats.

Ans. African lions, according to a study, can jump up to 36 feet laterally and 12 feet vertically.

Ans. They can go without food for a maximum of 14 days.

Ans. Lions usually hunt and eat medium-sized to large hoofed animals like wildebeests, zebras, and antelopes. They occasionally also prey on larger animals, especially sick or injured ones, and eat found meat such as carrion.

Ans. Lions have a bite force of about 650 PSI and are the second-strongest big cats in the world. They are about four times stronger than humans, but they are weaker than tigers.

29. How do Lions adapt to their environment ?

Ans. The main trait of their survival is their skin color. The tan golden color skin makes it possible for them to hide between tall grasses in the wild. The camouflage characteristic makes it easy for them to wait and attack their prey at the right time. They also hide from their enemies.

Ans. Prides may comprise anywhere from 2 to 40 lions - including up to to three or four males, a dozen or so females, and their young. More on National Geographic.

Ans. Ramu was the oldest lion ever lived. He was 28 years old when he died due to his old age.

Ans. A lion's vision is roughly six times more sensitive to light than humans, giving them a distinct advantage when hunting at night.

Ans. A Lion pride may include up to 3 males.

34. Are all African lions the same species ?

Ans. There is only one species of lion, which is known scientifically as Panthera leo. There are two recognized subspecies, the African lion P. l. Leo and the Asiatic lion P.

36. Which felid species is the only rival of Lion in length, weight and height ?

Ans. Of the living felid species, the lion is rivaled only by the tiger in length, weight, and height at the shoulder.

37. Which animal has the highest percentage of muscles of its body weight among the mammals ?

Ans. Lion with 58.8% of skeletal muscles of its body weight has the highest percentage among the mammals.

38. Which male lions are mostly favored as mates by the female lions in Serengeti National Park ?

Ans. Males with dense, dark manes are mostly favored as mates by the Female Lions.

40. Why Castrated Lions often have no manes ?

Ans. Often castrated lions have little to no manes because the removal of the gonads inhibits testosterone production.

Ans. It is due to a genetic condition called leucism which is caused by a double recessive allele. It is not albino, it has normal pigmentation in the eyes and skin.

42. Which national park has most of the white lions ?

Ans. White Lions are mostly found in and around the Kruger National Park and the adjacent Timbavati Private Game Reserve in South Africa.

43. What kind of habitat are mostly preferred by the Lions ?

Ans. Lions mostly prefers to live outside the forest near to grassy plains and savannahs, scrub bordering rivers and open woodlands with bushes.

44. Where are Asiatic Lions mostly found ?

Ans. The Asiatic lion now survives only in and around Gir National Park in Gujarat, western India.

Ans. Although adult lions have no natural predators, evidence suggests most die violently from attacks by humans or other lions.

46. Why do lions roar late at night or early morning ?

Ans. Lions often call late at night or early morning when the air is still and cool, allowing the sound to travel much further.

Ans. A Lion's roar is so loud that it can be heard from a distance of 8 kilometres (5 mi).

48. What is the most common social behavior observed among pride members ?

49. What is the most common facial expression of a Lion ?

Ans. A common facial expression is the "grimace face" or flehmen response, which a lion makes when sniffing chemical signals and involves an open mouth with bared teeth, raised muzzle, wrinkled nose closed eyes and relaxed ears. More on wikipedia.

50. At what stage Lions begin to age and weaken ?

Ans. Lions begin to age and weaken at between 10 and 15 years of age at the latest.