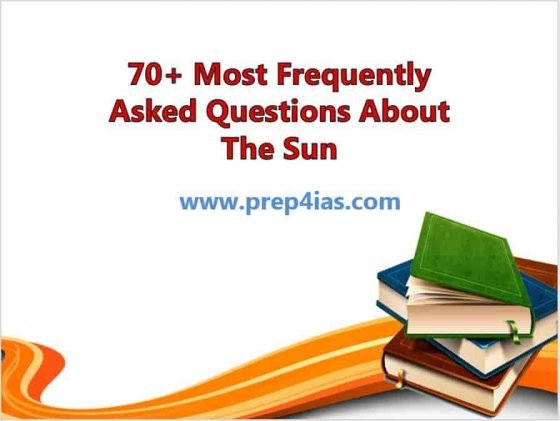 In this article, we will look into 70+ most frequently asked questions about the Sun which is the only star in our Solar System. Sun is not just a star but the energy source and driving force of our planet. Without it, life on earth will struggle to survive.

The sun is also responsible for keeping the planets in our Solar System into an orbit around it hence preventing it from floating out free in the space. Apart from this, Sun also drives weather, ocean currents, seasons, and climate, and makes plant life possible through photosynthesis. While there are many questions about the origin, existence and role of our only star, we will see some of the most frequently asked one in below section.

70+ Most Frequently Asked Questions About The Sun

Also Read: 200+ Important Discoveries Questions and Answers for All Exams

Ans. The Sun is a huge spinning, glowing star at the center of our Solar System. It radiates heat and light as a result of Nuclear Fusion reaction.

Ans. The color of the sun is white.

Ans. About one million Earths could fit inside the sun.

Ans. Earth's average distance to the Sun is about 93 million miles (150 million kilometers) from the Sun.

Ans. The Sun is composed of layers made up almost entirely of hydrogen and helium.

7. When will the Sun explode ?

Ans. Astronomers estimate that the sun has about 7 billion to 8 billion years left before it sputters out and dies.

Ans. The Sun, on average, is about 150 million kilometers away from the Moon.

Ans. The average distance between Mars and the Sun is 142 million miles (228 million kilometers).

Ans. The Sun's diameter is about 400 times larger than that of the Moon.

14. How big is the Sun compared to Jupiter ?

Ans. The Sun's diameter is about 10 times larger than that of the Jupiter.

Ans. Mercury is the closest planet to the sun

16. What vitamin comes from the Sun ?

Ans. At the age of 1011 billion years, the Sun will reach the end of its life.

Ans. The Sun is known as a yellow dwarf star.

22. What direction does the Sun rise ?

23. What would happen if the Sun exploded ?

Ans. If the sun explode tomorrow, the shockwave generated from the explosion would not be strong enough to destroy the planet but the side facing the sun at that time would boil away instantly. The rest of the part would be 15 times hotter than the sun's current surface temperature and also cause the permanent darkness. The sun's mass is currently keeping the earth in an orbit around it but without its mass the planet would start floating off into space. In the mean while, the inhabitants of the planet would definitely struggle to survive.

25. Is lightning hotter than the Sun surface ?

Ans. Lightning is about 25,000 degrees Celsius, which is roughly five times hotter than the surface of the sun.

26. Does the Earth revolve around the Sun ?

27. Does the Earth revolve around the Sun clockwise or counterclockwise ?

Ans. Earth orbits the Sun at an average distance of 149.60 million km (92.96 million mi) in a counterclockwise direction as viewed from above the Northern Hemisphere.

29. How long is the Sun expected to remain stable ?

Ans. According to few studies, the Sun is expected to remain stable for the next 5 billion years.

30. What is the temperature of the Sun at its core ?

31. What is the temperature of the Sun at its surface ?

32. What planet is the farthest from the Sun in our Solar System ?

Ans. Neptune is the farthest planet from the sun in our Solar System.

33. What planet is the farthest from the Sun in our Galaxy ?

Ans. As of now Neptune is known as the farthest planet from the sun in our Solar System as well as in our Galaxy, the Milky Way.

34. How does the Sun produce energy ?

Ans. Solar energy is created by nuclear fusion that takes place in the sun. Fusion occurs when protons of hydrogen atoms violently collide in the sun's core and fuse to create a helium atom. This process, known as a PP (proton-proton) chain reaction, emits an enormous amount of energy.

35. How long does it take earth to orbit the Sun ?

Ans. Earth takes about 365 days to orbit the sun.

Ans. A spacecraft traveling approximately 36,000 miles an hour (58,000 km an hour) would take slightly over 100 days to reach the Sun from Earth.

Ans. The average distance from Saturn to the Sun is 886 million miles or 9.5 AUs.

42. How long does it take Pluto to orbit the Sun ?

Ans. It takes Pluto 248.09 Earth years to complete one orbit around the sun.

Ans. Around 1,000 Jupiters could fit into the Sun.

Ans. The Sun formed about 4.6 billion years ago in a giant, spinning cloud of gas and dust called the solar nebula. As the nebula collapsed under its own gravity, it spun faster and flattened into a disk. Most of the nebula's material was pulled toward the center to form our Sun, which accounts for 99.8% of our solar system’s mass. Much of the remaining material formed the planets and other objects that now orbit the Sun. (The rest of the leftover gas and dust was blown away by the young Sun's early solar wind.) More on NASA official website.

48. How does the Sun burn without oxygen ?

Ans. The burning in the Sun is not due to oxygen but it is due to Nuclear fusion process which uses hydrogen as fuel. The chain reaction creates intense amount of heat and temperature.

51. How long does it take Uranus to orbit the Sun ?

Ans. Uranus revolves or orbits around the Sun once every 84 Earth years.

Ans. Earth is closest to the sun every year in early January, when it's winter for the Northern Hemisphere.

Ans. The corona is the outermost layer of the Sun's atmosphere where strong magnetic fields bind plasma and prevent turbulent solar winds from escaping.

55. Is the earth getting closer to the Sun ?

Ans. No, Actually the sun is getting farther away from Earth over time.

Ans. The color of the sun is white.

Ans. The Sun provides about 98,000 lux (lumens per square meter), upon a horizontal surface, at sea level.

59. How long does it take Venus to orbit the Sun ?

Ans. Venus revolves or orbits around the Sun once every 0.615 Earth years, or once every 224.7 Earth days.

Ans. Earth, our home planet, is the third planet from the sun.

61. What month is the earth closest to the Sun ?

Ans. Earth is closest to the Sun in the month of January.

62. How fast is the Sun moving through the milky way ?

64. How long does it take Jupiter to orbit the Sun ?

Ans. Jupiter revolves or orbits around the Sun once every 11.86 Earth years.

65. How long does it take Neptune to orbit the Sun ?

Ans. Neptune makes a complete orbit around the Sun (a year in Neptunian time) in about 165 Earth years.

66. How many Suns are in the milky way galaxy ?

Ans. Astronomers have discovered 2500 so far, but there are likely to be many more in the Universe. There are an estimated 100 billion stars in our Milky Way galaxy alone.

Ans. The Sun is becoming increasingly hotter (or more luminous) with time. However, the rate of change is so slight we won't notice anything even over many millennia.

Ans. Proxima Centauri is the closest star to the Sun, lying just over four light-years away.

Ans. Sunspots are dark phenomena on the Sun's photosphere that appear as temporary spots that are darker than the surrounding areas.

Ans. The Copernican heliocentric model proposed by Nicolaus Copernicus was the first widely accepted idea that the sun was the center of the solar system.

72. What month is the earth farthest from the Sun ?

Ans. Earth is farthest from the sun in the month of July.