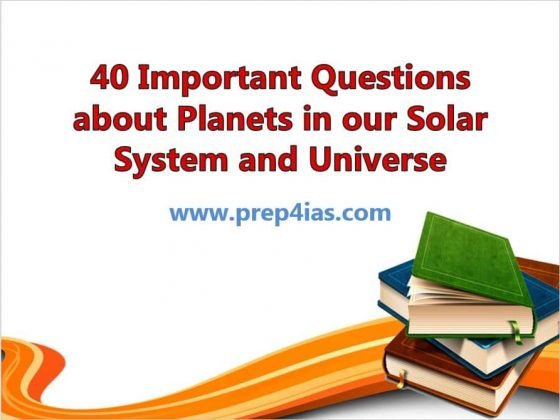 In this article, I will take you through 40 important questions about planets in our Solar system and Universe. There are countless heavenly bodies exist in the entire Universe. Planets are also one of them. Most of the planets in the cosmos are either dead or does not have suitable conditions to sustain life except the one where we live in. Earth is part of solar system with eight other planets, all of which orbit in a direction around a star called sun. In past few decades, a lot of study and research has been done to understand the planets of the solar system and beyond that. Here we will see some of the important questions from that.

40 Important Questions about Planets in our Solar System and Universe

Also Read: 35 Most Frequently asked Questions about the Languages in the World

Ans. A planet is a celestial body which orbits around the sun and has enough gravity to form a spherical shape. It should also have enough mass to clear any objects near its orbit.

2. How many planets are there in our Solar System ?

Ans. There are eight planets in our Solar System.

Ans. According to International Astronomical Union, Pluto has not cleared its neighboring path of space objects that includes asteroid and other rocky objects over the time like other planets did in the Solar System. Hence it is not qualified to become a planet and thus regarded as a dwarf planet.

4. What is the hottest planet in our Solar System ?

Ans. Venus is the hottest planet in our solar system.

5. What is the coldest planet in our Solar System ?

Ans. Uranus is the coldest planet in our solar system.

6. What is the biggest planet in our Solar System ?

Ans. Jupiter is the biggest planet in our solar system.

7. What is the smallest planet in our Solar System ?

Ans. Mercury is the smallest planet in our solar system.

8. What planet is closest to the Sun ?

Ans. Mercury is the closest planet to the sun.

9. Which planet has the most moons ?

Ans. Planet Jupiter has the most moons in the Solar System.

10. Why do all the planets orbit in the same direction ?

Ans. As the Solar Nebula collapsed, the matter within began to spin faster in one direction under its own gravity. Due to conservation of angular momentum, the rotational speed of the cloud increased and then ultimately flattened out. Over the time, the spin has persisted in the same direction resulting into planet orbiting the same direction.

11. How many planets in the Universe ?

Ans. According to an estimation, there are around 1 to 10 trillion orbiting planets in our Universe.

12. What is the closest planet to earth ?

Ans. Mercury is the nearest planet to Earth.

13. Which planets have rings in our Solar System ?

Ans. According to an estimation, there are around 100 Billion Planets in the Milky Way.

15. What is the farthest planet from earth ?

Ans. Neptune is the farthest planet from earth.

Ans. According to a hypothesis, deep within Neptune and Uranus, it rains diamond.

17. How many dwarf planets are there ?

18. What is the order of the planets from the Sun ?

19. When did Pluto stop being a planet ?

Ans. On August 24, 2006, the International Astronomical Union (IAU) announced it had re-classified Pluto as a dwarf planet.

Ans. A planet is round because of gravity. A planet's gravity pulls equally from all sides. Gravity pulls from the center to the edges like the spokes of a bicycle wheel. This makes the overall shape of a planet a sphere, which is a three-dimensional circle. More on NASA official website.

21. How many moons does each planet have ?

Ans. Below are the number of moons each planet have in our Solar System :-

22. What is the farthest planet from the sun ?

Ans. Neptune is the farthest planet from the sun.

Ans. The outer planets of the Solar System are Jupiter, Saturn, Uranus and Neptune.

Ans. Since sun has its own power source so it is basically a star. It also does not orbit any other star, moves only around the center of mass of the Milky Way galaxy. Hence it is not classified as a planet.

Ans. It orbits both sun and earth but according to definition of a planet it should only orbit a star which is not the case. Hence moon does not qualify to be a planet.

Ans. According to the most established theory, our planet and other planets in the solar system formed along with sun from a cloud of gas and dust called the solar nebula some 4.6 billion years ago. A shock wave from nearby supernova explosion triggered the collapse of Solar Nebula resulting in the formation of Sun at the center point and planets in a thin disk orbiting around it.

Ans. Mercury, Venus, Earth, and Mars are considered to be the Inner Planets.

28. What are the terrestrial planets ?

Ans. In our Solar System, the terrestrial are rocky planets which includes Earth, Mars, Mercury and Venus.

29. What color is the planet mercury ?

30. When will all the planets align ?

Ans. The closest that the eight planets will come to being aligned will occur on May 6, 2492.

Ans. The gravity of the Sun keeps all the planets orbit around it.

32. Why is Venus the hottest planet ?

Ans. Even though mercury is the closest to the Sun, Venus is known as the hottest planet in our Solar System. It is because of the Venus thick atmosphere of the greenhouse gas carbon dioxide and cloud of Sulfuric acid. The atmosphere traps the heat and make the planet so hot that a metal lead can easily melt.

Ans. Earth is estimated to be 4.54 billion years old, plus or minus about 50 million years.

Ans. Jupiter, Saturn, Uranus, and Neptune are the Jovian planets in our solar system.

35. Which planet has the longest day ?

Ans. Planet Venus has the longest day. It takes around 243.0226 Earth days to complete a single Venusian rotation.

36. Which planet has the most gravity ?

Ans. Jupiter has the highest gravity in our Solar System.

37. Which planet has the shortest day ?

Ans. Jupiter has the shortest day of all the planets. It rotates on an average once in just under 10 hours.

38. Which planet rotates on its side ?

Ans. Uranus axis is so tilted that it actually looks like the planet is rotating on its side.

39. Which planets are Gas giants ?

Ans. Jupiter, Saturn, Neptune and Uranus are known as the Gas giants.

40. What was the first planet formed in our Solar System ?

Ans. As per recent research, Jupiter was the first planet believed to be formed in our Solar System.