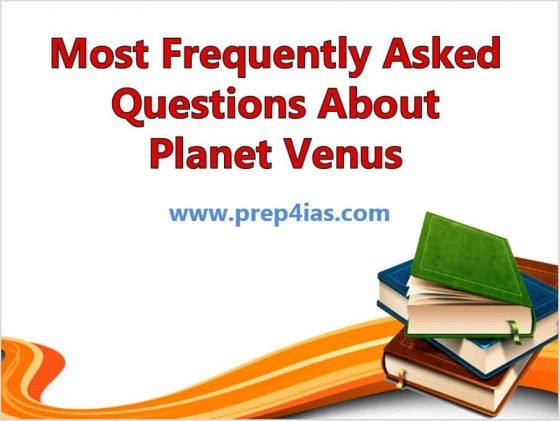 In this article, I will take you through 25 Most Frequently Asked Questions About Planet Venus but before that let me ask you a question. Did you ever thought that you can see a planet from naked eye ? I always thought that it will be great if we can see a planet through our naked eye without any help from a telescope. Guess what ? We do have a planet that can be occasionally seen through naked eye. That planet name is Venus.

It is a special planet in our solar system whose cloud is so thick and dense that it traps lot of heat and hence becomes the hottest planet of our solar system. Even hotter than Mercury. We will cover all the most frequently asked questions about this planet in below section. More about Venus.

Also Read: 35 Most Important Questions About Mars, The Red Planet

Ans. Venus is the second planet from the Sun in our Solar System.

2. How many moons does Planet Venus have ?

Ans. None. Mercury and Venus are the only planet in Solar System which does not have any moon.

3. How far is Planet Venus from Earth ?

4. Why is Venus hotter than mercury ?

Ans. Venus is hotter than Mercury because it has a much thicker atmosphere which absorbs heat through a phenomenon called greenhouse effect.

5. How far is Planet Venus from the Sun ?

Ans. The average distance of Venus is about 108.94 million km from Sun.

Ans. Venus is made up of a central iron core and a rocky mantle, similar to the composition of Earth.

Ans. As per NASA official, it takes about 97 days to reach to Venus.

9. What is the temperature of Venus ?

Ans. Temperature of the planet goes as high as 800 degree celsius due to its thick atmosphere.

Ans. Venus surface is the most hottest of all the planet in the Solar System. Its average mean temperature is about 737 K.

Ans. No. Venus is a Rocky planet, just like earth.

12. Does Venus have an atmosphere ?

14. How long does it take Venus to orbit the Sun ?

Ans. No. It does not have any rings.

16. Does Venus have a Magnetic field ?

Ans. Yes. Venus generates its magnetic field from the interaction of the Sun’s solar wind with the planet’s ionosphere.

17. What is Venus atmosphere made of ?

Ans. Its atmosphere is mainly made up of carbon dioxide (96%) and nitrogen (3%), with small amounts of other gases.

18. When was Venus discovered ?

Ans. The first person to point a telescope at Venus was Galileo Galilei.

Ans. Venus, the third brightest object after the Sun and Moon, was named after the Roman goddess of love and beauty.

21. How is Venus different from Jupiter ?

Ans. Venus is small and rocky, while Jupiter is giant and made almost entirely out of gas.

Ans. Venus is so bright because its thick clouds reflect most of the sunlight that reaches it (about 70%) back into space, and because it is the closest planet to Earth.

Ans. Yes. Venus is even hotter than Mercury.

Ans. Venus is entirely covered with a thick carbon dioxide atmosphere and Sulphuric acid clouds which give it a light yellowish appearance.