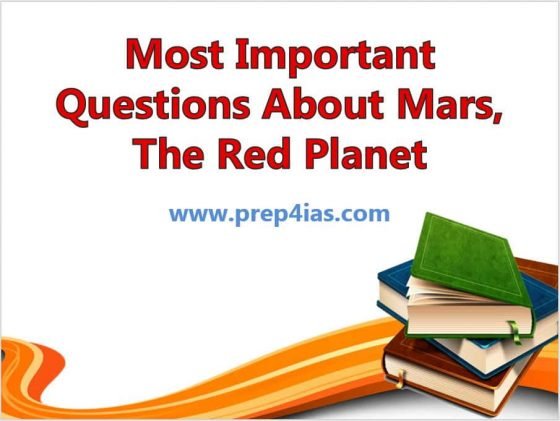 In this article, we are going to look into 35 Most Important Questions About Mars, The Red Planet but before that let me ask you a question. Do you know how many earth like planets are there in our Solar System ? If you don't know then let me tell you, the answer is none. But we always hope to find one that has all the same conditions like earth has. In this constant endeavour Mars has become one of the possible candidate. Over the years NASA and other space agencies has sent many mission to explore the Red Planet. Hence it is very important to discuss some of the frequently asked questions about the Red Planet. More about Mars Exploration Program.

Most Important Questions About Mars, The Red Planet

Ans. As per NASA official, the trip to mars takes about seven months.

3. How many moons does Mars have ?

5. Is Mars bigger than earth ?

Ans. No. Mars is about half the diameter of earth.

Ans. To date, no proof of past or present life has been found on Mars.

7. What is the temperature on Mars ?

Ans. The average temperature on Mars is minus 80 degrees Fahrenheit.

8. Does Mars have an atmosphere ?

Ans. Like Earth, Mars has an atmosphere and weather, but both differ greatly from what we experience on Earth.

Ans. Almost all water on Mars today exists as ice, though it also exists in small quantities as vapor in the atmosphere.

Ans. Mars will appear just above and to the left of Venus.

Ans. The simple explanation for the Red Planet's color is that its regolith, or surface material, contains lots of iron oxide.

Ans. Mars surface is rocky, with canyons, volcanoes, dry lake beds and craters all over it. Red dust covers most of its surface.

Ans. As of now, there are 5 rovers on the Mars.

Ans. It's made of iron, nickel, and sulfur.

Ans. If you look earth from Mars then it will look like star which gets fainter and fainter as it moves away.

Ans. NASA is recruiting to send humans to Mars as soon as 2037.

24. How long did it take perseverance to get to Mars ?

26. What is Mars atmosphere made of ?

Ans. The Red Planet's atmosphere contains more than 95% carbon dioxide and much less than 1% oxygen.

Ans. Mars is very cold planet. Its temperature can get down to as low as nearly minus 200 degrees F

Ans. Maximum recorded temperature at Mars is about +70 degrees F.

29. When was Mars discovered ?

Ans. The first telescopic observation of Mars was by Galileo Galilei in 1610.

30. Does Mars have a Magnetic field ?

Ans. Due to planet low atmospheric pressure, any water that tried to exist on the surface would quickly boil away. As a result there is no precipitation occurs on Mars.

Ans. Currently Mars has no rings.

35. Which Planet has the largest volcano and highest known mountain in the Solar System ?