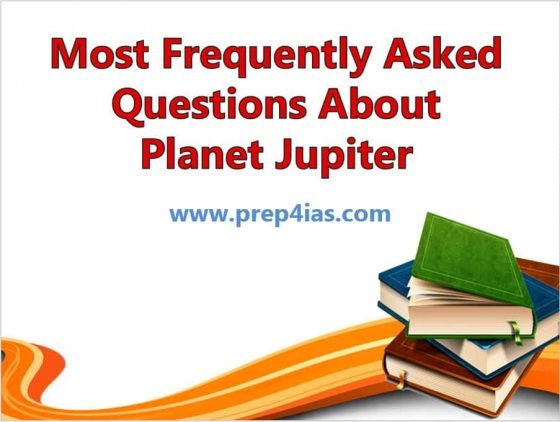 In this article, we will go through 30 Most Frequently Asked Questions About Planet Jupiter but before that let me ask you a very simple question. Did you ever thought which is the largest planet in our Solar System ? Yes you are right. It is none other than Planet Jupiter. What makes Planet Jupiter special is that it is more than twice as massive as all the other planets combined.

Also Read: 35 Most Important Questions About Mars, The Red Planet

Ans. Jupiter is the fifth planet from the Sun and the largest in the Solar System.

2. Does Jupiter have rings ?

3. How far is Jupiter from Earth ?

Ans. The distance of Jupiter from Earth is about 636.88 million km.

4. How many Earths can fit in Jupiter ?

Ans. More than 1,300 Earths would fit inside Jupiter.

Ans. Jupiter is of orange-yellow color but reflects mainly blue rays of the spectrum.

7. How long does it take to get to Jupiter ?

Ans. It can take around two years to six years to reach Jupiter.

Ans. The composition of Jupiter is similar to that of the Sun – mostly hydrogen and helium.

Ans. The Great Red Spot is a persistent high-pressure region in the atmosphere of Jupiter, producing an anticyclonic storm that is the largest in the Solar System.

12. How big is Jupiter compared to Earth ?

13. How many rings does Jupiter have ?

Ans. Jupiter is known to have 4 sets of rings.

14. What is the temperature of Jupiter ?

15. How many moons does Jupiter have ?

16. When was Jupiter discovered ?

18. How long does it take Jupiter to orbit the Sun ?

19. What is the diameter of Jupiter ?

21. Does Jupiter have an atmosphere ?

22. Is Jupiter the largest planet in the Solar System ?

23. What is Jupiter’s atmosphere made of ?

Ans. The planet atmosphere is covered in thick red, brown, yellow and white clouds. The clouds make the planet look like it has stripes.

Ans. As per the latest research done by Scientists, It rain diamonds on Jupiter.

Ans. Jupiter, being the biggest planet, gets its name from the king of the ancient Roman gods.

26. What is Planet Jupiter rings made up of ?

Ans. Jupiter rings mostly made up of dust.

Ans. No. Planet Jupiter does not have a solid core.

Ans. Jupiter’s environment is probably not suitable to life as we know it. The temperatures, pressures, and materials that characterize this planet are most likely too extreme and volatile for organisms to adapt to.

30. What are Galilean satellites ?

Ans. The four largest moon of the Jupiter i.e lo, Europa, Ganymede and Callisto are together known as Galilean satellites.