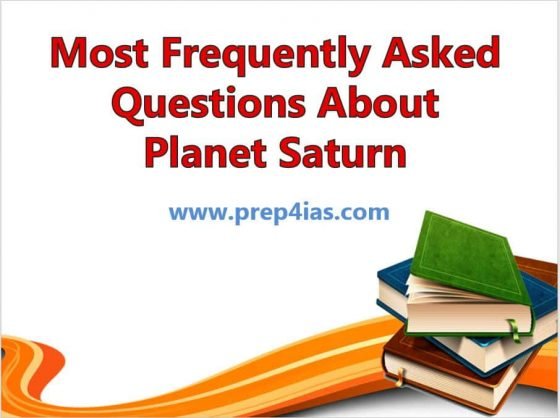 In this article, I will take you through 30 Most Frequently Asked Questions About Planet Saturn but before that let me ask you a simple question. Do you know which Planet has the most spectacular ring system in our Solar System ? If your answer is Saturn then you are absolutely correct. Saturn has the most spectacular ring system, with seven rings and several gaps and divisions between them. Saturn is also famous for its moon Titan which is the only moon in the Solar System to have a substantial atmosphere. We will see all the most frequently asked questions about Planet Saturn in below section. More about Planet Saturn.

Ans. Saturn is the sixth planet from the Sun and the second-largest in the Solar System, after Jupiter.

2. How many moons does Saturn have ?

Ans. It is yellowish-brown in color.

Ans. Saturn's rings are made of ice and rock.

5. How many rings does Saturn have ?

Ans. From far away, it looks like Planet Saturn has 7 large rings.

Ans. Saturn is made mostly of hydrogen and helium.

Ans. Saturn distance is about 1.4842 billion km from Sun.

Ans. With current technology, it will take around 8 years to reach Planet Saturn.

Ans. Saturn's rings are thought to be pieces of comets, asteroids, or shattered moons that broke up before they reached the planet, torn apart by Saturn's powerful gravity.

11. Does it rain diamonds on Saturn ?

Ans. Yes. About 10 million tons of diamond rain down on Saturn each year.

13. What is the temperature of Saturn ?

Ans. Saturn is considerably colder than Jupiter being further from the Sun, with an average temperature of about -285 degrees F.

Ans. As a gas giant, Saturn doesn't have a true surface. The planet is mostly swirling gases and liquids deeper down.

15. When was Saturn discovered ?

Ans. Saturn was named after the Roman god of agriculture.

19. How long does it take Saturn to orbit the Sun ?

22. How big is Saturn compared to Earth ?

24. When will Jupiter and Saturn align ?

Ans. Jupiter and Saturn aligns after every 80 years. Last alignment was at 2020 so the next alignment will be on 2080.

Ans. As viewed from Earth, Planet Saturn will look like hazy yellow-brown appearance.

26. What is Saturn's interior is mostly made of ?

Ans. Saturn's interior is most likely composed of a core of iron–nickel and rock (silicon and oxygen compounds).

27. Which is the largest moon of Saturn ?

28. What are the Great White Spots on Saturn ?

Ans. Every 20 to 30 years, Saturn's atmosphere roils with giant, planet-encircling thunderstorms that produce intense lightning and enormous cloud disturbances. The head of one of these storm popularly called "Great White Spots".

29. Which of the Saturn's moon often regarded as the potential habitat for microbial life ?

30. What is the temperature of Saturn's Internal core ?