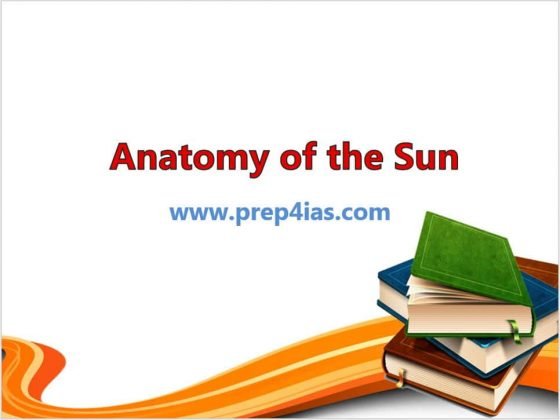 In this article, we will look at the Internal Structure, Composition and complete anatomy of the Sun. Being the only star in our Solar System, Sun not only provides us energy required for survival of human race and other beings but it also provides lot of information about Universe and its Origin.

Anatomy of the Sun

Also Read: What is Heat Dome ? | Intense Heat Wave in US and Canada

Sunspots are temporary phenomenon on the photosphere that appears as spot darker than surrounding areas.

A solar prominence, also known as filament is a large bright loop like feature extending outward from the Sun’s surface.

It is a small short lived grainy features that covers the sun, caused by thermal currents rising from below.

It is a reddish gaseous layer immediately above the photosphere where the density of plasma drops by a significant margin.

It is a visible layer of the Sun from where it emits its light and heat.

It is a thin irregular region that separates the relatively cool chromosphere from the much hotter Corona.

It is a sudden and intense release of energy in the form of a radiation.

The convective zone is the outermost layer of the interior where rapid heating of plasma creates currents of heated and cool gas.

It is the section of the Sun’s interior between the innermost core and outer convective zone where energy created in the core diffuses slowly through the Plasma.

It is the innermost part of the Sun which generates its energy from thermonuclear reactions.

It is the Sun’s outermost atmosphere which extends to millions of kilometers into outer space.

A Coronal Mass Ejection is a sudden and violent eruption of billion of tonnes of plasma and accompanying magnetic fields from the Sun’s Corona.

Solar Wind is a continuous stream of charged particles released from the upper layer of the atmosphere called Corona.

The Atmosphere of the Sun mainly consists of three layers – Photosphere, Chromosphere and the Corona. The outermost layer is the photosphere layer and is known to be most cooler region of the Sun. It is this layer which emits the white bright light which comes to us. Next layer is the Chromosphere layer which emits reddish light and is usually suppressed by the bright white light of photosphere. It can be seen only during Solar Eclipse. Next is the Corona layer which is the outer layer and extends to hundreds of kilometers in space. More on Sun Layers. Sun’s mass is about 73% hydrogen, 25% helium and rest of the 2% is Carbon, oxygen and other elements.