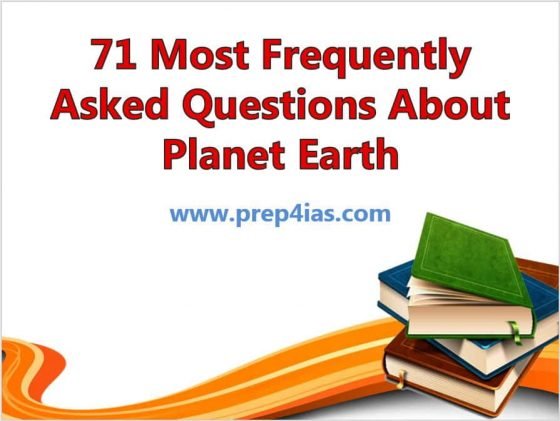 In this article, I will take you through 71 Most Frequently Asked Questions About Planet Earth which is home to million of species around the world. Unlike any other planet, as we know it Earth is the only planet where life exists. Even though water exists on other planet of the Solar System in different forms but to sustain life liquid surface water is only available on Planet Earth. Apart from water, oxygen is also required for the survival. Earth's atmosphere consists mostly of nitrogen and oxygen. We will see some of the most frequently asked questions about out Planet Earth in below section.

Ans. According to radiometric dating, Earth is about 4.5 billion years old.

2. Who was the first Person on Earth ?

Ans. Adam is the name given in Genesis 1-5 to the first human.

Ans. Earth Spins at a rate of roughly 1000 miles per hour.

5. How long have humans been on Earth ?

Ans. Fossils and DNA suggest that Human Sapiens evolved about 300,000 years ago.

Ans. The Shape of Earth is roughly like a Sphere.

Ans. The minimum distance from Earth to Mars is about 33.9 million miles (54.6 million kilometers).

9. How many people live on Earth ?

Ans. Earth's average distance is about 93 million miles (150 million kilometers) from the Sun.

Ans. Earth is an ellipsoid with a circumference of about 40,000 km. It is the densest planet in the Solar System.

12. What is the Circumference of the Earth ?

Ans. The Earth's Circumference as measured around the Equator is about 40,075 km.

Ans. The mantle lies between Earth's dense, super-heated core and its thin outer layer, the crust.

Ans. Earth has only one Moon.

Ans. According to a recent study, about 326 million trillion gallons of water is on Planet Earth.

16. What was the first Animal on Earth ?

Ans. According to a Study, Earth's first animal was the ocean-drifting comb jelly.

17. What would happen if the Earth stopped rotating on its axis ?

Ans. At the Equator, the earth's rotational motion is at its fastest, about a thousand miles an hour. If that motion suddenly stopped, the momentum would send things flying eastward. Moving rocks and oceans would trigger earthquakes and tsunamis. The still-moving atmosphere would scour landscapes.

19. How old is the Earth according to the bible ?

Ans. According to Bible, the age of earth is around 6000 years old.

Ans. Mars is the seventh largest planet in our solar system and about half the diameter of Earth.

21. What is the coldest place on Earth ?

Ans. The shape of Earth is nearly spherical. There is a small flattening at the poles and bulging around the equator due to Earth's rotation.

23. What is the hottest place on Earth ?

Ans. The name "Earth" is derived from both English and German words, 'eor(th)e/ertha' and 'erde', respectively, which mean ground. But as of now, there is absolutely no record about who named the planet as Earth.

26. What degree is Earth tilted at relative to its axis ?

Ans. Earth is tilted at an angle of 23.5 degrees relative to its axis.

27. How Far is the Sun from Earth in Astronomical Units ?

29. How many earths can fit in Jupiter ?

Ans. More than 1300 Earths would fit inside Jupiter.

30. How many satellites Orbit Earth ?

Ans. The average thickness of Earth's Crust is about 27-30 km.

Ans. The moon is a bit more than one-quarter (27 percent) the size of Earth.

Ans. The closest star to Earth is a triple-star system called Alpha Centauri.

35. What is the planet closest to the Earth ?

Ans. Mercury is the closest planet to the Earth.

36. What percentage of the Earth is Water ?

Ans. About 71% of the Earth's surface is Water.

Ans. The most probable fate of the planet is absorption by the Sun in about 7.5 billion years, after the star has entered the red giant phase and expanded beyond the planet's current orbit. More on wikipedia.

38. Which way does the Earth rotate ?

Ans. The earth rotates in the direction from west to east.

Ans. At the closest Point, Jupiter is about 365 million miles (588 million kilometers) from Earth.

Ans. When the solar system settled into its current layout about 4.5 billion years ago, Earth formed when gravity pulled swirling gas and dust in to become the third planet from the Sun. Like its fellow terrestrial planets, Earth has a central core, a rocky mantle, and a solid crust.

Ans. The core is made almost entirely of metal specifically, iron and nickel.

43. Which earth layer is composed of solid nickel and iron ?

Ans. The outer core is mainly composed of solid nickel and iron.

Ans. At the closest point, distance of Saturn is about 1.2 billion km (746 million miles) from Earth.

Ans. At the closest point, distance of Pluto is about 4.67 billion miles (7.5 billion kilometers) from Earth.

46. How long does it take earth to orbit the Sun ?

Ans. At the closest point, Venus is about 38 million miles (about 61 million kilometers) from Earth.

Ans. Mercury is at an average distance of about 48 million miles (77 million km) from Planet Earth.

Ans. At the closest point, Uranus is about 1.6 billion miles (2.6 billion kilometers) from Planet Earth.

Ans. At the closest point, Neptune is about 2.7 billion miles (4.3 billon kilometers) apart from Earth.

Ans. According to Nebular Hypothesis, Sun was the first in Solar System which got created from the Nebular Gas Giant some 4.6 billion years ago. Then later on all the planets in the Solar system got created within a span of 2-3 million years.

Ans. As per the Scientists estimates, almost all the planets in the Solar System formed at the same time that is around 4.54 billion years ago with an error margin of 50 million years.

54. How old is the Earth as compared to Jupiter ?

Ans. As per Nebular Hypothesis, smaller planets near the Sun like Mercury, Venus, Earth and Mars formed first about 4.54 billion years ago and then Gas giants like Jupiter, Saturn, Uranus and Neptune formed in next 2-3 million years.

55. How old is the Earth as compared to Saturn ?

Ans. Refer to Answer of Question no. 54.

56. How old is Earth as compared to Mercury ?

58. How old is Earth as compared to Uranus ?

Ans. Every year 22nd April is celebrated as the Earth's day.

60. When is Earth day Celebrated in the United States ?

61. How old are Earth and other planets in the Solar System ?

Ans. As explained earlier, earth along with other planets in the Solar System are formed almost at the same time with a difference of about 2-3 million years.

62. How Far is the Sun from Earth in Astronomical Units ?

63. Which layer of the Earth generates the Magnetic Field of the Planet ?

64. Which of the Gases are majorly available in Earth's Atmosphere ?

65. Which planet is the densest planet in the Solar System ?

Ans. During the first billion years of Earth's history, oceans was the first to be formed.

Ans. After the creation of the planet, oceans were formed in the first billion years and then life was developed within it. So Earth's life are around 3.5 billion years old.

68. Which is the Oldest material ever found on Earth ?

Ans. Stardust which was found on a crashed meteorite in Southern Australia in 1969 is known to be the oldest material ever found on Earth.

69. Which element is most abundant on Earth ?

Ans. Iron(32.1%) is known to be the most abundant element on the Planet Earth.

70. Which layer exists beneath the Lithosphere ?

71. What would happen if the Earth stopped rotating around the Sun ?

Ans. Below are the catastrophic results which might occur if the earth stopped rotating around the Sun:-

1 thought on “71 Most Frequently Asked Questions About Planet Earth”