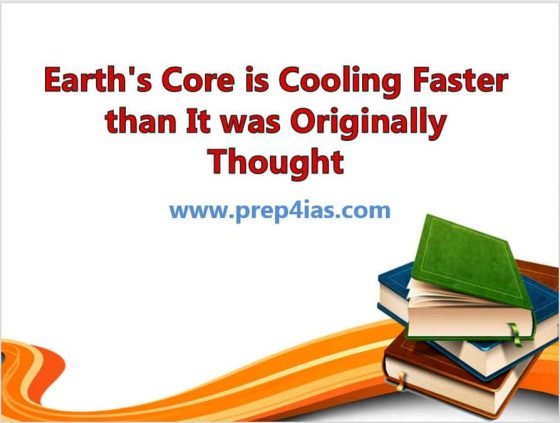 In a Recent Study done by the Researchers suggests that our planet core is cooling faster than it was originally thought. As a result it will turn into complete Solid just like other rocky planets Mars and Mercury. Earth has been gradually cooling since it was first created 4.5 billion years ago. But to check how quickly, it requires continuous research and further analysis so that we can come to some realistic conclusion about our survivability in this vast Universe.

What's this all About

The Earth has been releasing vast amounts of heat from deep Earth’s interior to the surface since its formation, which primarily drives mantle convection and a number of tectonic activities. In this heat transport process the core-mantle boundary where hot molten core is in direct contact with solid-state mantle minerals has played an essential role to transfer thermal energies of the core to the overlying mantle.

Although the dominant heat transfer mechanisms at the lowermost mantle is believed to be both conduction and radiation of the primary lowermost mantle mineral, bridgmanite, the radiative thermal conductivity of bridgmanite has so far been poorly constrained. Here the research revealed that the radiative thermal conductivity of bridgmanite at core-mantle boundary is substantially high approaching to ∼5.3±1.2 W/mK based on newly established optical absorption measurement of single-crystal bridgmanite performed in-situ under corresponding deep lower mantle conditions.

Researchers has found the bulk thermal conductivity at core-mantle boundary becomes ∼1.5 times higher than the conventionally assumed value, which supports higher heat ﬂow from core, hence more vigorous mantle convection than expected. Results suggest that the mantle is much more eﬃciently cooled, which would ultimately weaken many tectonic activities driven by the mantle convection more rapidly than expected from conventionally believed thermal conduction behavior. Check more about the Abstract.

Earth's Core is Cooling Faster than It was Originally Thought

The study shows that bridgmanite, a heat conducting mineral found at the boundary between Core and Mantle is actually conducting at a rate higher than it was originally anticipated. Although with this rate as well, it will probably take millions of years or may be billion to loose all the core heat.

Why Core is Important

The outer and inner core are together responsible for creating earth's magnetic field. Yes it is the same magnetic field which we call as magnetosphere that acts as a protective shield for our planet and hence saving us from harmful solar wind and other cosmic radiations. Not only it prevents our planet to become inhabitable but it also responsible for providing correct direction without which our Navigation System would have failed.

The discovery by researchers from other countries like Switzerland, Germany, US and Japan confirmed the idea that radiation plays a bigger role in heat extraction from the earth's core than once thought. With the recent data, researchers now has fair idea above the event currently progressing inside the earth's core but there's still significant amount of research needed to understand the contribution of heat by the radioactive materials to the planet's core. May be then the planet's thriving time period can be accurately calculated. Till then it will be interesting to see what happens next.