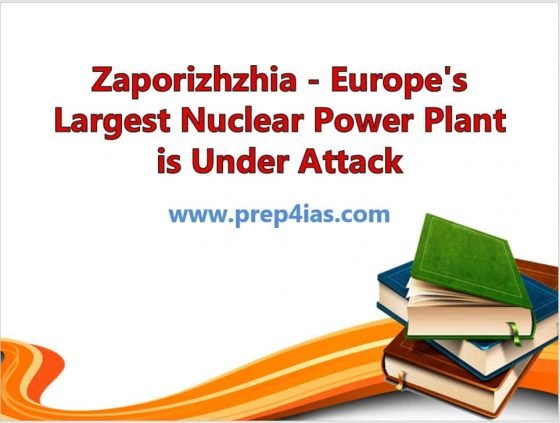 Zaporizhzhia Nuclear Power Plant in Ukraine is the largest nuclear power plant in Europe. It is also among the 10 largest Nuclear Power Plant in the World. The plant is located in Southeastern Ukraine near the city of Enerhodar, on the banks of the Kakhovka Reservoir on the Dnieper river. It has 6 VVER-1000 pressurized light water nuclear reactors (PWR), each generating 950 MWe, for a total power output of 5,700 MWe. More on wikipedia.

Recently reports are coming that Russia Shelling attacks resulted in the Fire near the Nuclear Power Plant area. Although there are no reports of radiation leakage or any damage to the Nuclear reactor but Ukraine Defence Minister is urging Russian Military to stop attacking the Power Plant.

Russia is continuing its attacks on major Ukrainian cities resulting in heavy casualties from both sides. Since the start of this war, more than 500 civilians and 1000 soldiers are dead with several hundreds of them getting severely Injured. Russian forces are hitting military and strategic targets and slowly moving towards the Ukraine Capital Kyiv to overthrow the President Volodymyr Zelenskyy Government. President Putin has long accused Ukrainian President as Pro West and eager to join NATO which will facilitate the NATO further eastward expansion right at the door steps of Russia. Hence causing a direct conflict between NATO and Russia.

Why It Is Attacked

Currently it is not very clear on why Russian forces had assaulted the Nuclear Power Plant but according to some reports, it is possible that Russian Soldiers while retaliating to Ukraine accidently hit the Plant as they are trying to make their way towards Kyiv and this Reactor is on their Path. Other possibility is that Russian President thinks Ukraine is trying to make a bomb using countries Nuclear reactor so he might be looking to capture the Plant from Ukrainian Authorities.

Why It is Important for Ukraine

The plant generates nearly half of the country’s electricity derived from nuclear power, and more than a fifth of total electricity generated in Ukraine. It has six reactors, each with a power capacity of 950MW, making the total capacity of the plant 5,700MW, enough to power four million households.

The primary risks is about radiation leakage. If the radiation gets leaked out then according to an estimate the disaster will be atleast 10 times of Chernobyl Nuclear Disaster. Another major risk is with Dnieper river which is the longest river of Ukraine. The Power Plant is situated on the banks of this river which means any radiation leakage will contaminate the water and hence will affect the population of all those regions where the river water flows through.

How to Stop This

First and foremost thing is that Russia should stop shelling the Nuclear Power Plant Blocks to avoid any further damage. Second thing is that, all the Reactor Unit must be stopped and cooled down immediately to stop the Core from any kind of potential explosion. Then a full damage assessment needs to be done to understand how much repair needs to be done to restart the reactor with full safety features. Finally, talks between both the countries is the only solution to improve the overall situation.

US, UK, France and other European Union countries condemned the attack on Nuclear Reactor. This will further worsen the situation of war torn country and its people. Previously Russian Army captured the Chernobyl Reactor accusing the Ukrainian government that it is trying to make a dirty bomb. NATO is currently observing the situation very closely and is currently in close contact with all its allied countries.