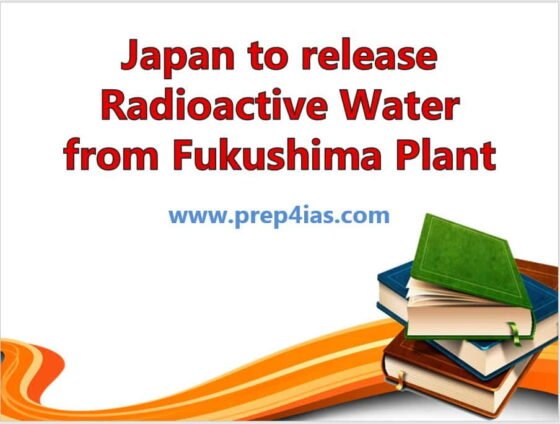 Japan has recently announced its plan to release Radioactive Water from Fukushima Nuclear Plant in 2022. Apart from US, many countries including China and South Korea expressed concern over this issue. United State appears to side with Japan and says it will monitor the effectiveness of this approach.

What is Radioactive Water

On 11th March, 2011 Japan’s Fukushima Nuclear plant got hit by a disastrous Tsunami and earthquake which caused major damages in the plant resulting to a release of thousands of tons of radioactive water in Pacific Ocean. It is considered as the most severe nuclear accident since Chernobyl disaster in 1986. It was classified as Level 7 on the International Nuclear Event Scale (INES), after initially being classified as Level 5, joining Chernobyl as the only other accident to receive such classification.

According to the Reports by the International Atomic Energy Agency(IAEA) and the United Nations Scientific Committee on the Radiation Effects of Atomic Energy(UNSCEAR), the discharge of the Nuclear waste water from the Fukushima Nuclear Power Plant would have profound impact on marine environment, food safety and human health.

A German marine science research Institute calculates that the radioactive materials would spread to most of the Pacific Ocean 57 days after the discharge and would spread over global waters in a decade. Greenpeace nuclear experts say it may even cause a genetic damage.

Radioactivity is a form of energy released due to decay of nucleus of an unstable atom. When we talk about decay, usually we consider emission of three types of radiations: alpha, beta and gamma. Alpha rays are usually not considered harmful unless it is taken directly. Beta ray can penetrate tissue and cause genetic mutations. Gamma rays are considered most dangerous as it can cause irreversible skin and tissue damage, even lead to Cancer risks.

How Much Radioactive Water is Considered Safe

According to US Environmental Protection Agency set maximum contaminant levels(MCL), for alpha particles it is 15 picocuries per Liter (pCi/L) and for beta particles, it’s 4 millirems per year. The EPA also sets limits for radium 226 and radium 228 – two isotopes of radium, a highly radioactive element – at 5 pCi/L, and uranium – which is used in nuclear power plants and nuclear weapons, among other things – at 30 micrograms per liter (ug/L). More on US Water Systems.

Does Japan will directly Release the Radioactive Water

As per Japan statement, they will first properly treat the radioactive water and will remove most of the harmful radioactive substances before releasing it into the Pacific Ocean. TEPCO plans to remove most of the isotopes from contaminated water, leaving only tritium, a radioactive isotope of hydrogen. Since it is extremely difficult to separate out the tritium from water, so TEPCO will dilute the water till tritium levels fall below the regulatory limits, before pumping it to the Ocean.

According to a 2014 Scientific American Article, Tritium is generally considered to be harmless as it does not emit enough energy to penetrate human skin however direct ingestion might create Cancer risks.

How to Treat Radioactive Water

Radioactive water can be treated upto a certain limit. If the amount of radiation is too high then it may not be treatable. Usually for Water treatment some of the popular combinational methods includes Carbon Filtration, Ion Exchange and Reverse Osmosis. These are found to be most effective. Other methods too can be used depending on which radio isotopes you want to remove.

Reactions from China and South Korea