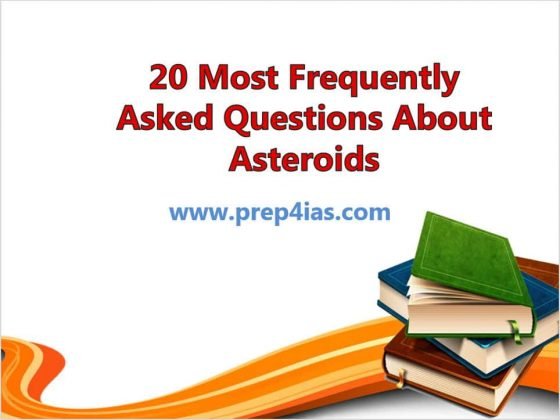 In this article, I will take you through 20 Most Frequently Asked Questions About Asteroids which has been closely tracked by World’s Space Agencies. Asteroids are always being an interesting topic within the Scientific Community since earth is always surrounded by lot of asteroids, most of them are concentrated in the asteroid belt between the planet of Mars and Jupiter. The size of asteroid can very from few metres to few kilometers of diameters. Usually it is larger than meteors but smaller than planets. We will see some of the most frequently asked questions about asteroids in below section.

20 Most Frequently Asked Questions About Asteroids

Ans. Asteroid is a rocky material of size less than a planet that orbits the Sun.

2. Where is the Asteroid belt located ?

Ans. It is located between the Orbits of Mars and Jupiter.

3. Where did the Asteroid that killed the Dinosaurs land ?

Ans. The Chicxulub crater hidden below the waters of the Gulf of the Mexico is known to be the impact site of Asteroid that hit earth some 66 million years ago.

4. Is an Asteroid heading towards earth ?

Ans. Jet Propulsion Laboratory (JPL) that tracks objects in the outer sky has spotted an asteroid nearly 1.3 kilometers in size heading towards Earth. Dubbed as potentially hazardous the object will make its close approach to Earth on March 4, coming as close to Earth as 49,11,298 kilometers. More on India Today.

5. When is the next Asteroid predicted to hit the earth ?

Ans. While NASA has reported that there are few Asteroids inching towards earth but none of them has the probability to hit the planet atleast for next 100 years.

6. What is the Asteroid Belt ?

Ans. It is torus shaped region in the Solar System located roughly between the orbits of the Planet Jupiter and Mars which contains many solid irregular sized objects called asteroids or minor planets.

7. What is the difference between a comet and an asteroid ?

8. What is the difference between an asteroid and a meteor ?

Ans. The main difference between an asteroid and a meteor is in terms of their size. An asteroid is a large heavenly body but smaller than the planet and meteor is a small piece of an asteroid.

9. How big was the Asteroid that killed the Dinosaurs ?

Ans. The asteroid that killed the Dinosaurs was about 7.5 miles (12 kilometers) in diameter.

Ans. Some asteroids are round and some will be elongated in shape.

11. What would happen if an Asteroid hit earth ?

Ans. After the impact more energy is released, the more damage is likely to occur on the ground due to the environmental effects triggered by the impact. Such effects can be shock waves, heat radiation, the formation of craters with associated earthquakes, and tsunamis if water bodies are hit.

12. How many asteroids are in the Asteroid Belt ?

Ans. The belt is estimated to contain between 1.1 and 1.9 million asteroids larger than 1 kilometer (0.6 miles) in diameter, and millions of smaller ones. More on NASA Official website.

13. Which is the biggest asteroid in the Asteroid Belt ?

Ans. Ceres is the largest asteroid in the main asteroid belt.

14. Which is the smallest asteroid in the Asteroid Belt ?

Ans. There are millions of smaller object in the Asteroid Belt.

15. How far is the asteroid belt from the sun ?

Ans. The asteroid belt lies between 2.2 and 3.2 astronomical units (AU) from our sun.

Ans. There are many theories regarding Moon in which one of the theory called Capture theory suggests that moon was a wandering body just like an asteroid and was captured by Earth’s gravity as it passed nearby. But there is no concrete proof of this. So it is difficult to say if moon is an asteroid.

17. What would happen if an asteroid hit the moon ?

Ans. As per the study done on the moon, most of the asteroid collisions resulted into the formation of small to large craters, even the largest asteroid known Ceres, wouldn’t affect the moon much. So the probability of causing any substantial impact on the moon is very minimal.

18. Which day is declared as the asteroid day by the United Nations ?

Ans. 30th June is declared as the asteroid day by the United Nations.

19. Can Asteroids have moons ?

Ans. Not all asteroids are having moon but it has been observed that few of the larger asteroid does have moon. For example in 1993, a tiny moon called Dactyl was discovered orbiting the large asteroid Ida.

20. How far is the asteroid belt from the Earth ?