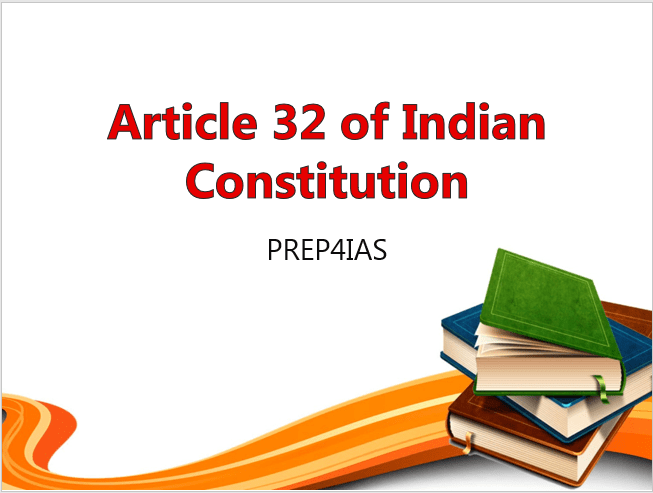 In this Session, we will discuss Important Questions on Article 32 of Indian Constitution and Its Similarity with Article 226. As you might know Fundamental Rights are mentioned in Indian Constitution from Article 12 to Article 36 to provide basic rights to Citizen of India. In this session, we will try to understand what one can do when your fundamental rights get violated and which all articles can be used in those cases.

This is very important topic from the perspective of UPSC Exam Syllabus and lot of questions get asked from this topic so we will try to see all the important questions that can be asked from Article 32 of Indian Constitution and Its similarity with Article 226.

1. What can one do when his/her fundamental right is getting violated ?

2. What kind of power Article 32 of Indian Constitution provides to Supreme Court ?

4. Which Article was called as the “Heart and Soul” of Indian Constitution by Dr.B.R Ambedkar ?

5. Apart from Article 32 which other article has the power to issue writs to protect one’s fundamental right ?

Ans. Article 226 has the same power as Article 32 to issue writs by the High Court.

6. Is it necessary to go to High Court before Supreme Court to protect your fundamental rights ?

Ans. No. But you might have to explain to Supreme Court why High Court is not been approached first.

8. How many types of writs are there ?

Ans. It is a kind of constitutional remedy.

10. In which four conditions writ of Habeas Corpus cannot be used ?

11. When can one use the writ of Habeas Corpus ?

Ans. When a person is illegally detained.

12. Can you explain Habeas Corpus through the Case of Rudul Shah vs State of Bihar ?

Ans. In this case, one person Rudul Shah who had already completed his confinement period was in prison for extra 14 years. So Habeas Corpus was used to release him immediately from the Prison Confinement and also ordered to pay the exemplary damages.

13. Where can one use the writ of Mandamus ?

Ans. When you have to command someone(statutory/non-statutory) to perform his public duty.

14. Can you explain Mandamus through the Case of Gujarat State Financial Corporation vs Lotus Hotels ?

15. What is the condition to apply Mandamus writ?

Ans. It requires to have a public duty.

16. When can a Judgement of Lower Courts becomes Illegal ?

17. What is the meaning of Quo Warranto ?

Ans. It means “By what authority”.

Ans. When you have to ask someone by which authority public office has been assumed.

19. Where can you use the writ of Prohibition ?

Ans. When you want to stop a court to pronounce his Judgement.

20. What if a Judgement is already pronounced and you want to stop that judgement to come into effect ?

Ans. In that case you can use writ of Certiorari.

21. What does writ of Certiorari is being used ?

Ans. When some judgement is already pronounced and it found to be an Illegal one then you can use writ of Certiorari to quashed that Judgement.

22. What is the main difference between writ of Prohibition and writ of Certiorari ?

23. Which are two famous cases for which writ of Certiorari has been issued ?

Ans. Two of the famous cases are:-
a) Gullapalli NageshwarRao vs APSRTC
b) A.K Kripak vs Union of India