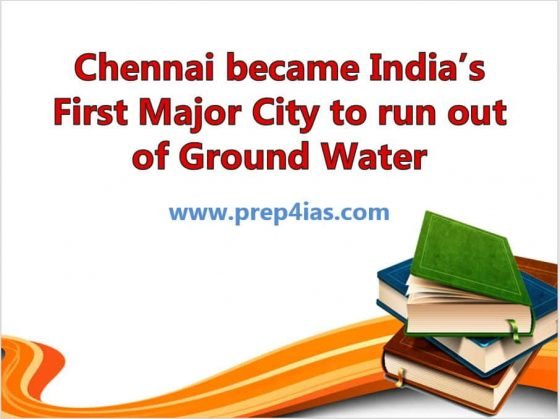 Chennai became one of the India's first major city with almost no ground water even at greater depths hence leading to overall water crisis. India's sixth largest city gets an average rainfall of about 1400 mm every year. Even it sits on a low plain on the southeast coast of India, intersected by three main rivers it does not have enough water for its population. It is due to the reason that all the rivers are heavy polluted due to unregulated waste discharge across the year. More on Niti Aayog official report.

India's First Major City to run out of Ground Water

According to a 2020 report by India's think tank Niti Aayog, 21 major cities including Delhi, Chennai, Bangalore and Hyderabad will run out of water by 2020 affecting the life of almost 100 million people. Report also claims that 40% of India's population will not have access to drinking water by 2030.

Till now both Central and State Government has failed to implement any effective solutions to deal with this Problem. Although governments are running many schemes in this regard but every summer 11 million people has to survive either on Water Tankers or from water provided by the neighboring states. As per Jal Shakti Ministry, drinking water will be provided to every household by 2024. Government is also considering reuse of water from the category of black water and grey water.

The main cause of this problem is Climate Change and Poor Planning by City Administration. Other important factors that contributed to this problem are:-

It is almost certain that if this problem persists for long then there will be some harsher consequences which population has to endure and suffer. Some of the near time consequences that we might see due to Water Scarcity problem are:-

While the problem itself has gone out of hand, it is very important to take immediate measures to deal with the Water Scarcity problem before it gets too late. Some of the effective measures that can taken are:-

Learning from Other Cities

While most of the Cities are struggling with their water problem but there are still few which sets an exemplary example of Water Conservation and Management. Some of those are:-

Chennai will Keep on suffering till it implements some strong measures to regulate its water problem. While it is yet to seen what comes up next but for the moment people are up with their water scarcity problem and always looking towards government for some quick relief.