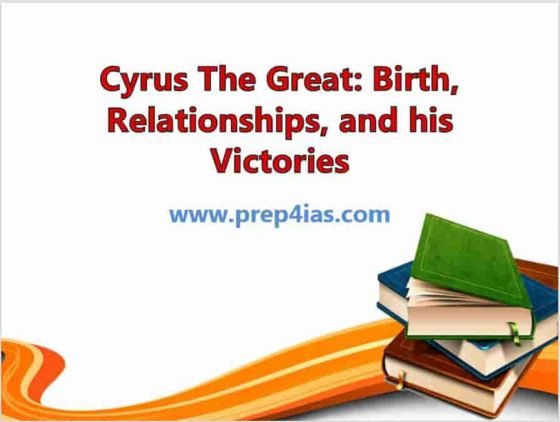 In this topic, we will provide an accurate idea of Cyrus's early life, his relationship with the king Astyages, and The most significant accomplishments and victories of this famous leader. Cyrus, the great king of Persia, is regarded as one of history's greatest figures, and many historians, who are not hostile toward eastern civilizations or other readers of political, sociological, or legal works, agree. He has a good reputation despite the absence of historical and archeological evidence at times.

Cyrus The Great: Birth, Relationships, and his Victories

The majority of ancient history textbooks, monographs, and articles promote his tolerance of the nations under his control. It is frequently mentioned that he permitted them freedom of religion, that he behaved respectfully when subduing nations, and that he reinstated several cultural relationships as a strategy to win the subject nations for the Persian empire through tolerance and clemency. 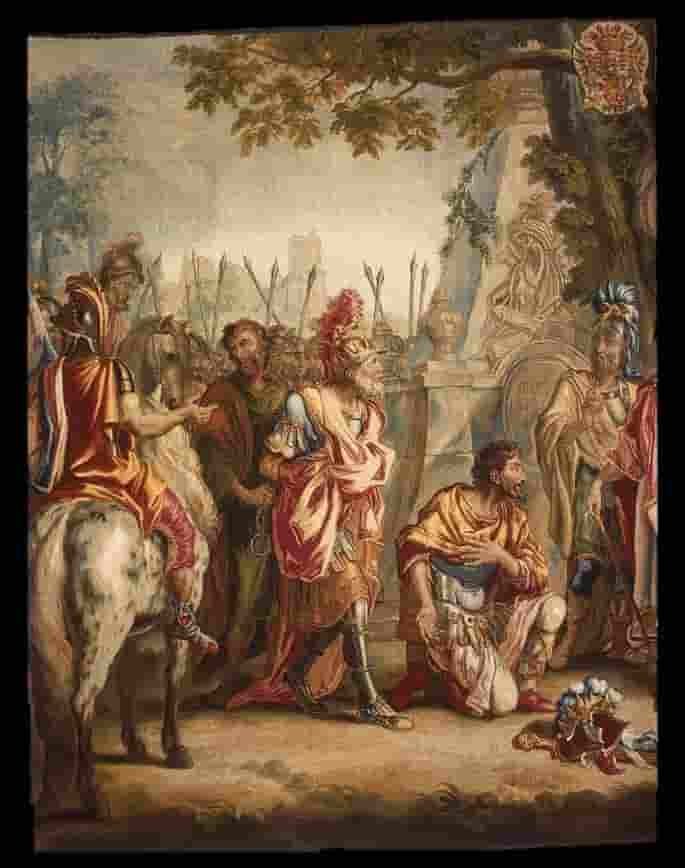 Birth of Cyrus The Great

Cyrus the Great was the son of Persian King Cambyses I and a Mede princess from the Achaemenid dynasty, who ruled the kingdom of Anshan, which is now in southwestern Iran. Achaemenes had established the dynasty (ca.700 BC), and his son Teispes of Anshan took his place. Few realms were arranged in the core of Asia-Assyria, Media, and Persia. Herodotus provides some specifics about Cyrus's birth in this context. As a reminder, Herodotus was one of the most significant ancient Western sources who reported on Cyrus's wars and personality and shared information about them.

Astyages had a nightmare one morning while Mandane was still living in her father's palace. As a result, it appeared to foretell a major disaster that would strike her kingdom. He thought it might be a sign that she would have a son, like the flood he saw in the dream, who would rebel against him and take the supreme power after she married him.

Astyages decided that his daughter should be provided with a husband in some other region rather than marrying in the media in order to guard against this imagined danger. In the end, he decided to marry Cambyses, the King of Persia. At the time, Persia was a relatively small and restricted Dominion, and even though Cambyses appears to have been its supreme ruler, he was far below Astyages in rank and power.

Despite the vast distance between the two nations, Persia's institutions and customs were straightforward. As a result, Astyages believed that sending Mandane served as some form of defense against the threat that his dream had hinted at.

As a result, Mandane got married. Her father had another dream about a year later. He had a dream in which a vine grew rapidly from his daughter and covered the entire land. As the vine is a representation of abundance and goodness, Astyages may have interpreted this vision as a positive sign. However, he is as yet scared of the successor who might be his opponent, and he is his grandson. He contacted his Soothsayers, told them about his dream, and asked for their advice. They concluded that it indicated that Mandane would bear a son who would one day rule as a king.

Astyages became extremely alarmed at this point, and he dispatched Mandane to return home, claiming that he wanted her to visit her father and her home country. In reality, however, he wanted her under his control so that he could kill her child as soon as it was born. When Mandane arrived in Media, her father set her up in a house. A few months passed near his palace, and then Mandane's child was born.

According to the myth, Cyrus was born either in 576 BC or 590 BC. Due to the limited number of damaged or lost sources that provide information about that period of his life, very little is known about his early years.

Herodotus depicts Cyrus's birth and early years in a mythical way that was frequently associated with historical events and characters, particularly those in which abandoned noble children like Oedipus, Romulus, and Remus return to claim their royal positions. His grandfather, Astyages, who ruled the powerful Median kingdom, was his ruler.

After the introduction of Cyrus, Astyages requested his steward Harpagus to kill the newborn child after the fantasy he saw, which the twitches thought about a danger to his standard. Because he was morally unable to kill a newborn, Harpagus summoned the king's herdsman Mithridates, and instructed him to dispose of the child. The young boy was saved by the herdsman, who adopted him and raised him as his own.

Cyrus was discovered by his grandfather when he was 10 years old because of his outstanding qualities. Despite the dream, the grandfather convinced him to let the boy live. Cyrus was permitted to go back to his biological parents, Cambyses and Mandane, by Astyages, who was more forgiving with him.

Cyrus the Great, just like Alexander, Csar, William the Conqueror, and Napoleon when he was younger. He led his friends in their sports, and his powerful mind, which had a lot of power over a lot of men as they got older, showed his early superiority early on and got them to follow his rules and decisions. Even though Herodotus' description is a legend, it sheds light on Cyrus' personality and character as well as the people who were involved in his early life.

According to Herodotus, Astyages, the son of Cyaxares, became king after his father's death, probably between 584-550 B.C. He was the father of Mandane, Cambyses's future wife, making him Cyrus II the Great's grandfather.

Harpagus, according to Herodotus, was looking for an opportunity to exact revenge. Harpagus was successful in persuading Cyrus when he reached adulthood that the Medes were prepared to revolt against their despotic king. Astyages "armed all the Medes, and blinded by divine providence he appointed Harpagus to be the leader of the army," after Cyrus formed a coalition of ten Persian tribes and rebelled. Naturally, Harpagus did not hesitate to change sides. Astyages, who had been held captive by Cyrus, was taken by the combined army of Medes and Persians as they marched toward the Median capital.

It is conceivable that the most profound reason for the disobedience of Harpagus was disappointment with Astyages' strategy. The Iranian tribes began to settle down in the sixth century, and their kings began to act like real kings rather than being the first among equal tribal chiefs. The revolt was inevitable when Astyages began to punish one of the other tribal chiefs.

According to the Byzantine scholar Photius, the Greek historian Ctesias, who lived around 400 BCE, refers to Astyages as "Astugas", which is more similar to the Babylonian spelling of his Iranian name, "Itumegu". In Greek, the variant "Astyages" means "sacker of cities".

The mutiny on the battlefield is mentioned as the reason Astyages was overthrown in the contemporary Chronicle of Nabonidus, but Harpagus is not named. However, given that Harpagus was Astyages' general at the battle of Pasargadae, that his family received high-ranking positions in Cyrus' empire after the war, and that Harpagus went on to become Cyrus most successful general. It is possible that he was involved in the rebellion against Astyages.

After that, Cyrus conquered Ecbatana, the capital of Astyages. Old sources concur that after Astyages was taken by Cyrus he was treated with leniency, however the records contrast. Herodotus says that Cyrus kept Astyages at his court for the rest of his life. Ctesias says that Cyrus was made governor of a Parthia region and killed by Oebares, a political opponent. The conditions of Astyages passing are not known. Croesus invaded Cyrus to exact revenge on Astyages following his overthrow. In or shortly after 547 BC, Cyrus conquered Lydia with Harpagus by his side.

Most Significant Accomplishments and Victories of Cyrus

Cyrus led a rebellion against the Median king Astyages five years after ascending to the throne in 558 B.C. as a vassal king of the Median Empire, which controlled most of modern-day Iran. He gathered the heads of other Persian tribes and led the rebellion. In 550 B.C., Cyrus overcame Astyages' forces at the Battle of Pasargadae and seized Ecbatana as its capital, aided by a Median general who had defected.

Before expanding to the west, Cyrus had to first consolidate his power over Iranian tribes on the Iranian plateau after inheriting the Medes empire. When Croesus, king of Lydia in Asia Minor (Anatolia), heard that Astyages had fallen, he expanded his domains at the expense of the Medes. Cyrus, the Median king's son, marched against Lydia. Croesus was either killed or burned to death when Sardis, the capital of Lydia, was captured in 547 or 546.

Other sources claim that Croesus was taken prisoner by Cyrus and treated well. As vassals of the Lydian king, the Ionian Greek cities on the coast of the Aegean Sea now became subject to Cyrus, and most of them gave in after a brief siege. Later, some Greek city revolts were severely crushed.

Cyrus then moved on to Babylonia, where the people's dissatisfaction with the ruler Nabonidus gave him a reason to invade the lowlands. Even the priests of Marduk, the national deity of Babylon's great metropolis, had separated from Nabonidus, so the conquest was swift. The Persians conquered the greatest ancient city in October 539 BCE.

The catch of Babylon conveyed Mesopotamia under the control of Cyrus as well as Syria and Palestine. When Cyrus marched against Croesus, the ruler of Cilicia in Asia Minor became an ally of Cyrus, and Cilicia remained special in Cyrus's empire. As a result, he established the largest empire ever known through diplomatic means as well as military means. It would appear that Cyrus had multiple capitals. The first was the Medes' former capital of Ecbatana, which is now Hamadan. The second was the new capital of the empire, Pasargadae, in Persia.

Cyrus also inherited Median possessions in eastern Iran when he defeated Astyages, but he had to fight a lot to establish his rule in this area. Herodotus describes his campaign against nomadic people who lived east of the Caspian Sea after he conquered Babylonia once more. The Greek historian claims that Cyrus was initially successful in capturing the son of the nomad ruler, the Massagetai, who was a woman.

In retaliation for the son's suicide in captivity, his mother defeated and killed Cyrus. Although Herodotus account may be fictitious, the fact that a city in the farthest Sogdiana was referred to by the Greeks as Cyreschata, or Cyropolis, suggests that Cyrus's Eastern conquests were genuine.

Cyrus is well-known for releasing Jewish captives held captive in Babylonia and allowing them to return to their homeland. Additionally, Cyrus was tolerant of the Babylonians and other people. By adhering to local customs and even offering sacrifices to local deities, he helped reconcile the local populace. Cyrus was quick to learn from the conquered peoples and was not a Persian chauvinist. In a sort of dual monarchy of the Medes and Persians, he not only reconciled the Medes but also united them with the Persians.

Cyrus had to learn how to be a king from the Medes, who had an empire when the Persians were just their vassals. Cyrus had to learn these customs from them. In addition, it appears that there was little innovation in government and rule; rather, there was a willingness to borrow and the capacity to adapt borrowed material to the new empire. Cyrus was unquestionably the driving force behind the development of Achaemenian culture and civilization as well as the establishment of a vast empire.