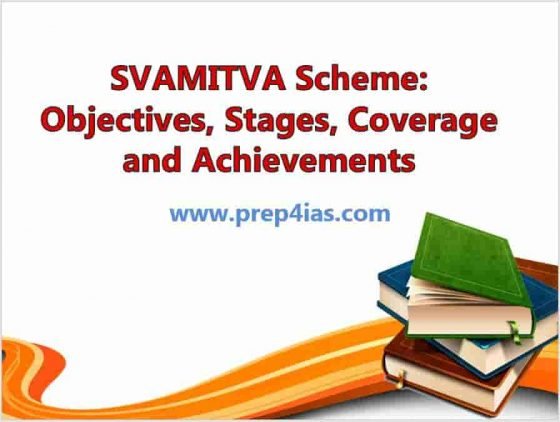 “Ownership of land and houses plays a big role in the development of the country. When there is a record of property, citizens gain confidence”. - PM Narendra Modi

SVAMITVA (Survey of Villages and Mapping with Improvised Technology in Village Areas) is a Central Sector Scheme that aims to give rural Indians access to an integrated inhabited (Abadi) property ownership solution. On April 24, 2020, National Panchayati Raj Day, the Honorable Prime Minister announced the start of the Scheme's Pilot Phase.

Since independence, only agricultural and have been included in government surveys of rural land. The inhabited areas of villages also referred to as "abadi" land in Uttar Pradesh and Madhya Pradesh, "lal dora" land in Punjab and Haryana, and "gaothan" land in Maharashtra and Gujarat, among others, have mainly stayed beyond the scope of such surveys in a number of states. Since many village groups in India lack records of their rights, their claim to ownership of land in the "abadi" area is largely dependent on whether or not they actually control the property.

The owners of properties in rural areas are unable to use their own property as a financial asset for the purpose of obtaining loans from banks in the absence of a legal document. Therefore, it is necessary to employ technology to benefit rural households in order to grant the owner of the household property rights supported by changes to the State Land Revenue Code/Acts.

Given below are the main objectives of the SVAMITVA Scheme:-

High-resolution maps can be swiftly produced using survey-grade drones and the Continuous Operating Referencing System (CORS) network. The high-resolution photos make it simple to identify the proportions of one's own plots. A total of 500–600 drone teams with around 2000 competent workers would be needed to cover the entire nation. With an accuracy of +/- 5 cms, high-quality survey grade UAVs/drones allow for the creation of maps at a scale of 1:500.

Public infrastructure comprising 567 CORS stations or a geo-positioning infrastructure, has been created. This infrastructure can be utilized to replace the chain surveys now used in many States. The estimation and inspection of public works will also help all departments as a result of this.

Preparatory Activities for the Implementation of the State SVAMITVA Scheme

a) The signing of MoU: The Memorandum of Understanding (MoU) for the implementation of the SVAMITVA Scheme in the State will be signed by the State Nodal Department, which consists of the State Revenue Department, the State Panchayati Raj Department, and Survey of India (SoI).

b) CORS Site Selection: If applicable, the State Government must give Survey of India a secure government building or location to set up CORS.

c) Amendments in Rules/ Acts: The State nodal department need to check the extent of activities that can be undertaken to conduct drone survey for the demarcation of rural inhabited areas in the State Revenue Act/ Panchayat Act. If required, State may need to seek an amendment in the State Rules/Acts to undertake drone-based surveys of properties.

d) Finalization of Property cards format: The State nodal department need to ensure that for issuance of property card to villagers, whether the prescribed form of property card need to created/modify/update / or any amendment in State Revenue Codes with respect to Drone Survey methodology

e) Commencement of IEC Activities: The State government shall develop a comprehensive communication strategy to undertake awareness programs to sensitize the local population about the surveying methodology and its benefits. The list of indicative IEC activities is shown below.

f) Establishment of State Programme Management Unit (SPMU): The State Revenue Department, District officials, GP functionaries, Survey of India, and other stakeholders will all receive support from the State Programme Management Unit, which will be established at the State level for the overall management, monitoring of various activities under the Scheme, and support.

i) Organise Gram Sabhas: The village's residents will be invited to Gram Sabha by the Gram Panchayat in order to educate them of the survey's timetable and to raise awareness of its advantages.

j) Orientation Training – Revenue employees will receive training from Survey of India on survey-related procedures and how to use the SARTHI and SAHYOG software.

k) Demarcation of inhabited/abadi area: The coordinates of the Abadi area and KML files must be provided by the state government for the India survey. Officials from Survey of India will also receive scanned copies of the accessible rural populated maps from the State Revenue Department. (If accessible)

The plan's results include issuing property cards to property owners and amending the "record-of-rights" in the revenue/property registers. The monetization of rural home assets for lending and other financial services would be made easier as a result. Additionally, this would open the door for a straightforward determination of property tax, which would benefit the GPs and result in better public amenities.