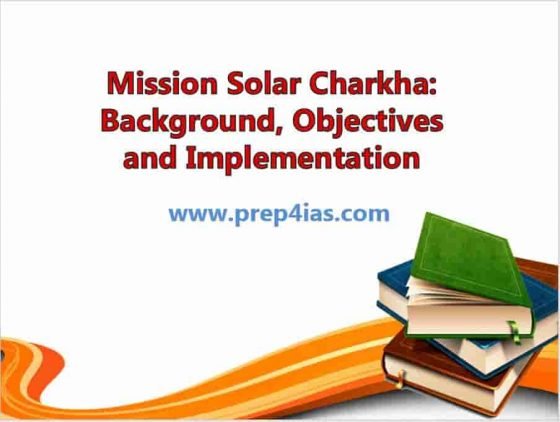 A subsidy of Rs. 9.60 crores has been allocated under the solar charkha project for the Implementing Agency to purchase charkha and looms. Compared to hand-spun charkhas, the solar-powered charkhas utilized in these clusters are more productive. Productivity will increase and the amount of physical labour needed to spin the yarn will be reduced.

The hand-braced, transportable charkha, used for spinning cotton, has served as a representation of independence. The father of the nation, Mahatma Gandhi, introduced charkha. Gandhi's Khadi Movement and Charkha have a long history of mutual influence. The Swadeshi Andolan, a campaign to boycott imported goods, was greatly aided by the khadi movement. In the 1920s, he advocated khadi spinning for rural self-sufficiency and opposed British products. Khadi was more than simply a scrap of fabric; it represented a revolution. Mahatma Gandhi employed it as a tool to combat unemployment and poverty.

Despite being a time-consuming process, a significant portion of India's weavers and artisans have been using hand-spun charkhas since the country's independence. Before India gained its independence, the British controlled the country's textile sector, which led to the mass production and importation of foreign textiles. The local textile industry, which included numerous small weavers and spinners, was put in danger by it.

So, in order to strengthen this industry and increase its productivity, the government, led by Prime Minister Narendra Modi, launched the Mission Solar Charkha in 2018. According to the solar charkha mission, an enterprise-driven programme, "solar charkha clusters" will be established, reaching 200 beneficiaries by 2024, including weavers, spinners, stitchers, and other skilled artisans.

India's government has given the green light for the solar charkha mission following the implementation of the solar charkha pilot project in Khanwa Village in Bihar in 2016. With the approval to establish 50 individual clusters with a budget of Rs. 550 crores for 2018–2019 and 2019–2020, one lakh people will be directly employed in the fifty approved clusters. The Ministry of MSME has designated the solar charkha unit as a village industry in accordance with the plan.

The Ministry and technical specifications have settled on a standard solar charkha with 10 spindles after testing numerous solar charkha models. The solar charkha mission planned to establish "solar charkha clusters," which would include the focal hamlet and other surrounding communities within an 8–10 km radius. There will be roughly 1000 charkhas in each cluster, and 2042 artisans will have direct employment through these charkhas.

The Scheme's objectives are as follows:-

The goal is to encompass 50 solar clusters around the nation, with the different programme components expected to cover about 100,000 artisans and beneficiaries. All Indian States must execute the programme. It will also be taken into consideration how the clusters are distributed geographically around the nation, with at least 10% of them being in the North Eastern Region (NER), J&K, and mountainous states. For the scheme's request for project proposals, 117 aspirational districts will receive special attention.

The maximum subsidy for one Solar Charkha cluster would be Rs. 9.599 crores. An indicative Scheme is given below. The following three types of interventions would be covered under the Scheme.

b) Interest subvention for Working Capital

The plan calls for courses for spinners, weavers, and other garment unit employees at a total cost of Rs 0.595 crore for each cluster over a two-year period.

Implementation of the Scheme

The establishment of a dedicated Mission Solar Charkha (MSC) website has been proposed in order to efficiently manage the solar charkha programme and related projects online by inviting proposals to a screening of applications and parallel monitoring of progress until completion. The Project Management System (PMS), will have built-in systems for online applications, MIS tracking, sharing of reports, monitoring the physical and financial progress, and other tools for project management like geo-tagging of new units established under the solar charkha mission scheme, will be enabled on such a website.

It is the first attempt by the government to get both the public and the private sectors involved in the introduction of solar charkhas on a large scale. The Indian economy may be able to grow more quickly because of the charkhas. By sustaining a steady rotation throughout weaving, the new spinning wheels kit will deliver high-quality yarn. By easing the physical strain on both spinners and weavers, the new looms have the potential to significantly alter the landscape of the khadi industry in the nation.

The authorization for a cluster will be granted by the scheme steering committee (SSC). This approval will be determined by the Promoter Agency's proposal and the assessment of the Detailed Project Report (DPR). The "MSC Administrative Fund" will receive more than 3% of the total budget to cover administrative and scheme management costs. The implementation of the plan will be overseen, carried out, and evaluated with an additional 1% of the overall budget.

Criteria for selection of Promoter Agency/SPV

a) Existing Khadi and Village Industry Institutions (KVI) could apply for setting up such a cluster. However, the following parameters must be fulfilled :-

b) Other Institutions such as SPV, Society, Trust, Section 8 Company or LLP under the Companies Act, 2013 registered under respective statutes could also apply for setting up a new Solar Charkha Cluster, with the following criteria:-

c) First Timers who want to join the village industry movement through solar charkha clusters could apply for a new cluster, with the following criteria:-

In the areas listed below, the State Government will actively participate in the Solar Charkha Scheme:-

Monitoring and Evaluation of the scheme

A third-party mid-term evaluation of the clusters is planned in order to evaluate the solar charkha mission concept. Such an assessment will assist in identifying the program's shortcomings and enabling the adoption of mid-course corrective actions. To verify the results achieved, an Impact Assessment study will be conducted at both the cluster and programme levels at the conclusion of the project.

The introduction of the solar charkha programme by the Indian government, led by PM Narendra Modi, intends to greatly simplify the life of khadi workers. The newly purchased solar-powered charkha has increased the artisan's daily income from Rs. 140 to Rs. 350.

Their morale has received a big lift as a result. The solar charkha project will increase the likelihood of creating jobs, particularly in India's rural areas. Mechanically powered charkhas have taken the role of the hand-driven charkhas' arduous labour. This has encouraged homemakers in rural areas to enter the workforce, increasing output.

Our Prime Minister Narendra Modi has given khadi, a homespun cloth that serves as a metaphor for India's freedom cause, fresh life. The solar charkha project will create khadi a fabric with no carbon footprint by doing away with energy. Over the next 10 years, the Ministry will create over 50 million jobs for women by disseminating solar looms. This will significantly contribute to raising the share of khadi from its current 1.4% share in the Indian textile industry.

The Ideal Village Plan will add up to 80 lakh new jobs by expanding the solar charkha scheme to all of India's villages. The solar charkha mission is taken into consideration as Aatmanirbhar Sena develops policies.

The solar-powered charkha will also contribute to energy savings because, when compared to other fabrics, it uses less water during production. Khadi is hence frequently referred to as a "green cloth." A successful sector that is environmentally benign and sustainable is the khadi industry. The solar charkhas can bring about transformation and carry Mahatma Gandhi's legacy forward for the benefit of everybody.