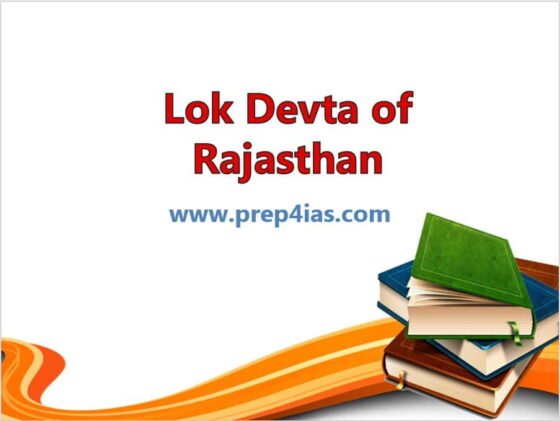 Of the numerous Lok Devtas and Devis, the five greatest are worshipped throughout the Rajasthan, they are called Panchpir.

-> He was born on 1003 A.D. at Dadrewa (now Rajgarh) in the Churu district of Rajasthan.
-> His father’s name was Raja Jewar Thakur.
-> His mother’s name was Queen Bachhal.
-> He was married to Shreeyal Roz who was daughter of Tandul Nagari’s King Sindha Singh.
-> As per the legend, he used to protect people from Snake bites(Jaharpeer).
-> Saint Goga ji fought with Mahmood Gajnavi for protection of cows.
-> He died in Gogamedi in Hanumangarh District.
-> The Main Temple of Goga ji is in Gogamedi, which is built by King Ganga Singh.
-> Villages in Rajasthan has a Than dedicated to him, Than is always under Khejri tree.
-> Every year a fair was Organised for Goga ji at Gogamedi from 9th day of dark-half (Krishna Paksh) of Bhadra month to eleventh of the month.
-> Phad- Musical instruments- Damru and Madal.
-> Some other facts about Goga ji- Farmers tie 9 Knot- Goga Rakhadi – to their plough for good harvest.
-> The identification of Goga ji is Blue Horse, Spear and Snake.

-> He was born on Bhadarwa Sudhi Beej V.S. 1405, Ramderiya, Kashmeer, Barmer district of Rajasthan.
-> His father’s name was Ajmal ji Tanwar.
-> His mother’s name was Mainaldevi.
-> He was a 14th century ruler, it is said that he have miraculous powers, who devoted his life to the upliftment of the downtrodden and poor people of society.
-> As per the legend, after giving away Pokharan in dowry for his niece Ramdev ji made Runicha (Ramdevra) his new residence.
-> He died in Runicha, Jaisalmer.
-> The temples of Ramdev ji located at Ramdevra, Pokaran (Jaisalmer), Biratiya khurd and in many states of India.
-> Ramdev ji started SKamadia Panth.
-> As symbol, his pagaliya (Foot Prints) are worshipped.
-> The fair for Ramdev ji held in Runicha (Jaisalmer), Bhadrapada Shukla Dwitya to Ekadashi.
-> Terah Taali dance is presented by kamadias.
-> Ramdev ji composed- Chaubis Vaniya.

-> He was born on 1233 A.D at Kolu Village, Phalodi in the Jodhpur district of Rajasthan.
-> His father’s name was Dhandhal ji Rathore.
-> His mother’s name was Kamladey .
-> His horse name was Kesar Kalmi .
-> He married to daughter of King Surajmal Sodha Supyardey.
-> Pabuji’s Phad is very famous.
-> As per the legend, he was associated with rathore family of Marwar.
-> He is also known as God’s of Camel.

-> He was born on Bhundel in the Nagaur district of Rajasthan. (contemporary of Rao Jodha).
-> His father’s name was King Gopalraj Sankhla.
-> He is cousin of Baba Ramdev ji.
-> He was well versed in Shakun Shastra.
-> His main temple is in Baingti Village, Phalodi, Jodhpur.
-> In the temple, Sankhla Rajput act as priests and worship Harbu ji ki gaadi.

Other Lok Devta’s of Rajasthan

-> Teja ji was born on 1074 A.D. at Kharnal in the Nagaur district of Rajasthan.
-> His father’s name was Tahar Dev.
-> His mother’s name was Ramkumwari.
-> He is known as Snake Diety.
-> Tejaji sacrificed life while recovering cows of Lachha Gujri from cluthes of meenas.
-> Kala and Bala– benefactor in agricultural activities.
-> Tejaji’s major Than are located at Sursura, Beawar, Saindaria and Bhanwata in Ajmer district.
-> Saindaria is known as the main place as this is supposed to be place he was bitten by snake.
-> The fair held on Parbatsar, Nagaur.
-> Cattle fair is organized from Bhadra Shukla Dashmi to Poornima.
-> Tejaji’s identification is black horse with Sword and Snake .

-> He was born on 911 A.D.
-> His father’s name was Sri Sawai Bhoj.
-> His mother’s name was Saadu Khatana.
-> As per the legend, he was the brave warrior and his Sadhak are considered incarnation of Lord Vishnu.
-> For the worship of Dev Narayan ji leaves of Neem are essential.
-> He worshipped at Devmali near Asind (Bhilwara), Devdham Jodhpuria (Tonk).
-> Fairs of Dev Narayan ji are held at Ajmer, Bhilwara, Tonk and Chittaurgarh on Bhadrapad Shukla Shasthi and Saptami.
-> His horse name is Leelagar.

-> He was born on Vikran Samvat 1601, Merta in the Jodhpur district of Rajasthan.
-> His father’s name was Asha Singh
-> He married to the daughter of Rao Krishn Das, Krishna.
-> Kalla ji is famous as “Lok Devta with four hands”.
-> Ranela is sacred peeth for worship of Kalla ji.
-> Temples of Kalla ji are located at Bhauraigarh, Mahiyadham varda, Salumbar, Samalia, Gatroad.

-> His real name was Gangdev Rathod.
-> His father’s name was Biramdev Rathod.
-> He was born at Shergarh, Jodhpur
-> He is nature loving Lok Devta.
-> Whenever a person is bitten by Poisonous creature, taken to baba’s place and thread is tied.
-> He worshipped at Panchmukhi hill of Panchota Village (Nagaur District)

-> He was born on 1358 A.D. at Marwad.
-> His father’s name was Rawal Salkhan Tidaji.
-> His mother’s name was Jinande.
-> His wife’s name was Rupadey
-> Defeated army of Subedar Nizamuddin of Malwa in 1378 A.D.
-> The Main temple of Mallinath ji is at Tilwara, Barmer
-> Fairs of Mallinath ji held at Tilwara, Barmer- Chaitra Krishna Ekadashi to Chaitra Shukla Ekadashi.
-> Tharparkar Cow is traded most in his fair.
-> Malani pargani in Barmer is named after him.

-> Worshipped in villages as a protector of land.

-> He is known as the Lok Devta of rain.
-> His main temple is situated in Shyalodra (sikar).

-> He is known as God of Village.
-> He is also known as the Lok Devta of Love.
-> His temple is situated in Eloji (Jaisalmer).

-> He was born at Sathu ( Jalore).
-> Waged war with robbers in Sathu village in Jalore District.
-> Fair of fatta ji held every year on Bhadon Sudi Navami.

-> He is known as the protector and savior of Gurjars.
-> His temple is at Nagla Jahag village of Bharatpur district.
-> His main worship place is at Ashind (Bhilwada).

-> He was born at Naga village, Jaisalmer.
-> His main place is at Panrajsir.
-> Two fairs every year held at panrajsar, Jaisalmer.