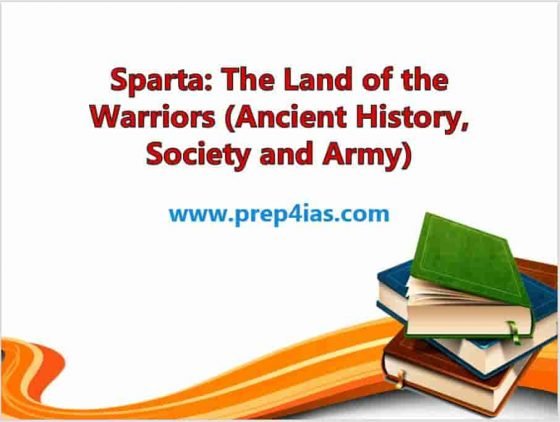 One of the most significant city-states in classical Greece, Sparta was renowned for its military strength. At Thermopylae and Plataea in the 5th century BCE saw the professional and well-trained Spartan hoplites engage against the Persian army with distinction. They were recognizable by their distinctive red cloaks and long hair. They were arguably the greatest and most feared fighters in Greece.

Sparta: The Land of the Warriors (Ancient History, Society and Army)

Also Read: Genghis Khan and the creation of the Mongol Empire

The city of Sparta also engaged in two protracted wars that caused enormous damage, the Peloponnesian Wars in the middle to late 5th century BCE and the Corinthian Wars in the early 4th century BCE. These wars were the result of constant rivalry between Sparta and the other two major Greek cities of Athens and Corinth.

According to Greek mythology, Lacedaemon, a son of Zeus, founded the ancient city. He gave the area and the city both their names. Sparta played a significant role in the Greek troops that fought in the Trojan War. The Trojan prince Paris kidnapped the Spartan king Menelaus' wife Helen, who had been given to him by the goddess Aphrodite as a reward for choosing her in a beauty contest with rival deities Athena and Hera. As a result, Menelaus declared war on Paris. Helen was thought to be the most attractive lady in all of Greece, and Spartan women in general were known for both their beauty and their fierce independence.

Taking Control of the Region

Sparta was in the southeast of the Peloponnese, in the fertile Eurotas valley of Laconia. The region was first occupied during the Neolithic era, and throughout the Bronze Age, a significant settlement grew there. But according to archaeological data, Sparta was a brand-new city founded about the 10th century BCE.

The majority of neighboring Messenia was conquered by Sparta in the late 8th century BCE, and its populace was forced to serve Spartan objectives. Sparta eventually came to dominate roughly 8,500 km2, making it the largest polis or city-state in Greece and having a significant role in Greek politics. Perioikoi, or conquered peoples of Messenia and Laconia, were frequently forced to fight in the Spartan army despite having no political rights there. Helots, or semi-enslaved agricultural laborers who resided on Spartan-owned estates, made up a second, lower social class.

The liberated helots, also known as Neodamdeis, served as a middleman between the Helots and the Perioikoi. Spartan citizens didn't engage in farming themselves; instead, they focused on politics, war, hunting, and military training. The helots were allowed to keep a portion of the products they raised, but they were also regularly expelled to maintain their social position and had the option of being drafted into the military during times of war.

Uneasy relations existed between citizens and helots, and there were occasionally riots, most notably in the 7th century BCE, which helped Sparta lose to Argos at Hysiae in 669 BCE. Around 545 BCE, Sparta exacted vengeance on Argos, but soon after, it was defeated by Tegea. The Peloponnesian League, which included Corinth, Elis, Tegea, and other states (but never Argos) and existed from approximately 505 to 365 BCE, was a result of the tensions in the region. Each member of the league vowed to have the same enemies and allies as Sparta.

The contribution of troops, rather than the payment of tribute to Sparta, was required for membership in the League. Up until the 4th century BCE, the League would permit Sparta to achieve hegemony over and rule the Peloponnese. Sparta started expanding her horizons beyond local politics in the 6th century BCE, as evidenced by her alliance with Croesus of Lydia and expedition against Polycrates of Samos in roughly 525 BCE.

Rivalry with Corinth, Thebes, and Athens

The tyrants of Athens were overthrown by Sparta under Cleomenes (ca. 520–490 BCE), but the following democracy put an end to any Spartan ambitions in the city. However, Sparta fought bravely at Thermopylae in 480 BCE and at Plataea a year later as an ally of Athens in the defense of Greece against the invasion of the Persian King Xerxes. Regional rivalries and helot revolts from 480 to 460 BCE severely harmed Sparta, and things got worse when rivalry with Athens led to the Peloponnesian Wars from 460 to 446 BCE and again from 431 to 404 BCE.

Both sides suffered losses throughout the protracted conflicts, but Sparta eventually emerged victorious when Lysander destroyed the Athenian navy at Aegospotami in 405 BCE, assisted by the Persians. However, Sparta's reign as the top city-state in Greece was to be brief.

The Corinthian Wars with Athens, Thebes, Corinth, and Persia from 396 to 387 BCE forced the city into another long battle due to continued Spartan ambitions in central and northern Greece, Asia Minor, and Sicily. The consequence of the conflict was the King’s Peace, which gave Persian control over Sparta’s empire, which Sparta had no way of properly managing because she lacked the necessary bureaucratic facilities.

However, Sparta was still allowed to rule over Greece. Sparta attempted to dominate Thebes but was defeated by the great Theban general Epaminondas in the decisive battle of Leuctra in 371 BCE. After Thebes conquered portions of Messenia, Sparta lost its position as a major power.

Sparta never regained her former greatness and was forced to join the Achaean Confederacy in 195 BCE after temporarily resisting Macedonian rule in the third century BCE and coming under Pyrrhus’ siege in 272 BCE. Sparta was given permission to leave the confederacy in 147 BCE while under Roman rule, which ignited the Achaean War. Though Sparta maintained cordial ties with her conquerors until it became a free city in the Roman world, the city’s ultimate days were numbered when Visigoth ruler Alaric attacked Sparta in 396 CE.

Because there were two hereditary kings from two different families, the Spartan political structure was uncommon. When one of these monarchs led the army on a campaign, they were especially potent. The kings served on the Gerousia, a council of elders, and they were also priests of Zeus. 28 males who were over 60 and maintained the job for life made up this body. The Gerousia presided over the citizen assembly and served as both Sparta’s highest court and a likely source of voting propositions. Every month, the assembly (Ekklsia) gathered and was open to all citizens who cast their votes by screaming.

Additionally, there was an executive committee made up of five ephors (ephoroi) chosen at random from the citizens. These individuals could only hold office for a single year and were not eligible for higher positions. One of the kings was also accompanied on a campaign by two of the ephors. It is unclear exactly how these various political forces interacted, but it is obvious that for the state apparatus to work, some level of agreement was required. It might also explain why Sparta has a reputation for being a conservative nation that takes its time making foreign policy decisions.

Like all Greek communities, Sparta was dominated by males, and the most influential men belonged to a small number of elite families. These people belonged to the landed aristocracy, and after reforms attributed to Lycurgus in the 6th century BCE and even earlier, in the province of the helots, citizens were forced to focus on athletic and military training as well as politics instead of engaging in agricultural production. Helots were not allowed to own property, which prevented them from achieving full citizenship. Later centuries would bring Sparta’s lack of social mobility to bear.

The number of Spartan hoplites (homoioi), which had been decimated by constant conflict in the 5th and 4th centuries BCE (from 8,000 in 490 BCE to 700 in 371 BCE), had gotten so low that non-Spartiate warriors had to be recruited, and their allegiance and interest in Sparta’s objectives was in doubt.

The foreigners (xenoi) were a part of Spartan society, although they were less welcome than in other city-states, and those who did reside there were occasionally forcibly ejected by their unduly suspicious.

All Spartan residents placed a high value on military training and thrifty living in common mess halls where the standard diet consisted of barley meal, cheese, figs, and wine. Males were raised in a militaristic environment known as the agōgē, where they were divided into age groups and housed in barracks, beginning at the age of seven. These young people followed intense military and athletic training that increased in difficulty after they turned 20 and joined communal mess halls (syssitions), where they frequently had homoerotic relationships with more senior and seasoned residents.

They were feared across Greece as a result of their rigorous training, which produced a professional hoplite army capable of rather complicated battle maneuvers. Sparta's notable absence of fortifications for the majority of its history may serve as evidence of this.

The Spartans’ military and their particular focus on religious concerns had some unique characteristics. Greek combat generally featured pre- and post-battle sacrifices, but the Spartan army went further, offering sacrifices before crossing rivers, for example, and even delaying mobilizing the army if a significant religious event was in progress. Marathon and Thermopylae during the Greco-Persian Wars are two well-known instances where the Spartans prioritized religion over war and even a national crisis. The Spartan soldiers were too late to help the other Greek cities in the earlier fight, and they mobilized only a token force in the latter one because they felt obligated to first celebrate the Karneia festival in honor of Apollo.

The Spartans’ military and their particular focus on religious concerns had some unique characteristics. Greek combat generally featured pre- and post-battle sacrifices, but the Spartan army went further, offering sacrifices before crossing rivers, for example, and even delaying mobilizing the army if a significant religious event was in progress. Marathon and Thermopylae during the Greco-Persian Wars are two well-known instances where the Spartans prioritized religion over war and even a national crisis. The Spartan soldiers were too late to help the other Greek cities in the earlier fight, and they mobilized only a token force in the latter one because they felt obligated to first celebrate the Karneia festival in honor of Apollo.

However, the Spartan hoplite army led the rest of Greece in the direction of greater military professionalism, and given the enduring image of fearless and obedient hoplites with red cloaks and lambda-emblazoned shields, this is Sparta for the Greeks, admiring Romans, and even moviegoers of the twenty-first century.

Ancient Greece's Sparta was a warrior society that rose to prominence after defeating Athens, a rival city-state, in the Peloponnesian War. Military service and state loyalty were fundamental to the Spartan culture. The Spartan boys joined a state-sponsored program for education, military training, and socializing. Duty, discipline, and endurance were encouraged by the system. Despite not participating in the military, Spartan women had higher prestige and more freedom than other Greek women.

The most encouraging lesson we can draw from the real history of Sparta is that imperfect people may do great things if they learn from their mistakes, because Spartans struggled, failed, recovered, and finally, triumphed.